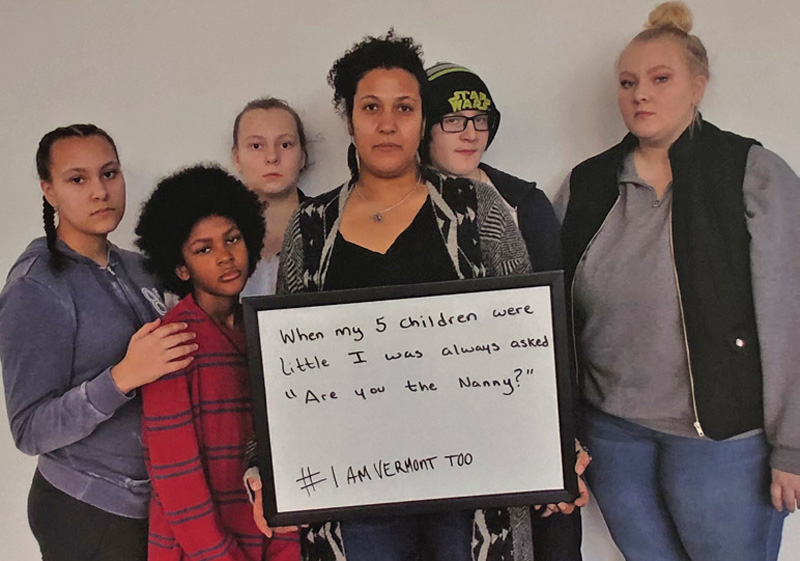 This was the intent of the exhibit, presented by the Root Social Justice Center and supported by a Vermont Humanities Council grant: to provide an opportunity for reflection by majority white communities which may be unaware of the impact of racial micro-aggressions. Where the most hostile and aggressive forms of racism may not be tolerated, the harms of bias, ambivalence and persistent trivialization may well persist. Comments attached to the photos reveal assumptions that a woman of color is the ‘nanny,’ that a family is not a family due to its range of skin color, that Vermonters of color must be from elsewhere than this, their home. 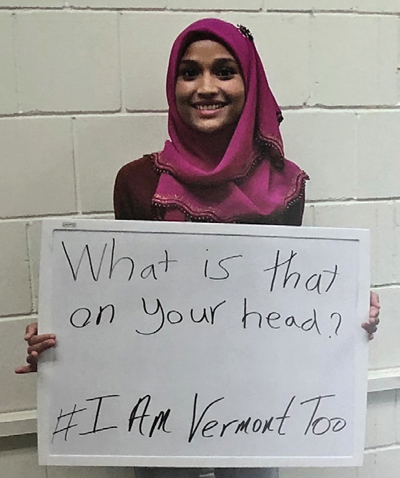 The four panel members, all residents of Hartford, spoke eloquently about the difficulties of growing up a minority in predominately white communities, shielded in childhood by parents who well understood not only overt racism but harmful bias. Asma Elhuni immigrated to the United States when she was two years old. Lead organizer now for the United Valley Interfaith Project, she moved to Vermont from a much more diverse Georgia and found this state’s demographic particularly difficult. “Something has to be done to transform our society… racism is taught. People aren’t inherently bad.” she said, after movingly describing her search for her own identity as a Muslim.

Kale Camara, a Dartmouth College junior living in White River Jct, next spoke about both race and gender, after self-identifying as queer and biracial. From Maryland, Camara spoke about how “my mom plotted privilege for me.” Born to a white mother and black father from Ghana, Camara finds Dartmouth “stifling… with roots that make it today (still) a bad place to be.” Describing stresses from a lack of gender-neutral campus bathrooms  and new solace of the White River, this speaker relayed anxieties, even from unintended acts, occurring in daily life and urged people to read more for better understanding of differences. 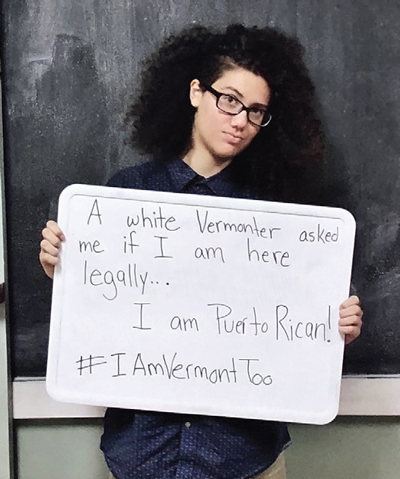 Jameson Christopher, the third panel member, is a Quechee resident, a Vermont Law School student, and Hartford Selectboard member. Noting he prefers to be identified as black or Afro-American rather than a person of color, he told some of his life story as a son of the first black Connecticut State Police captain and a black New Haven nutritionist. They protected him, he later learned, from bias and injustice in that community toward the young talented black pitcher and quarterback. He noted that now it is sometimes most difficult to talk to white liberals, and that he tries not to speak too much in class on racial issues, “if I keep speaking for you on racial issues, how do you learn?” He extended greetings throughout the room at the conclusion of the program, appreciative of the opportunity provided, at his suggestion, by the library for this intermingling. He is now in the process of changing his name from Jameson Davis to Jameson Christopher (his middle name) as another step toward his identity as a black man.

The final panelist, Alicia Maddox, was unable to attend but appeared via video. Born in rural Maine and now living in White River Jct., she spoke of her “rainbow family” and how her passion is “ensuring that our society is one to pass on to my children… from the moment my very dark son was born, I started seeing things very differently in ‘welcoming’ Vermont.”

At 12:30, the program ended but many stayed for an hour or more, talking in small groups in different parts of the library, often walking around looking again at the photos and no doubt thinking of the additional burdens carried by those portrayed.