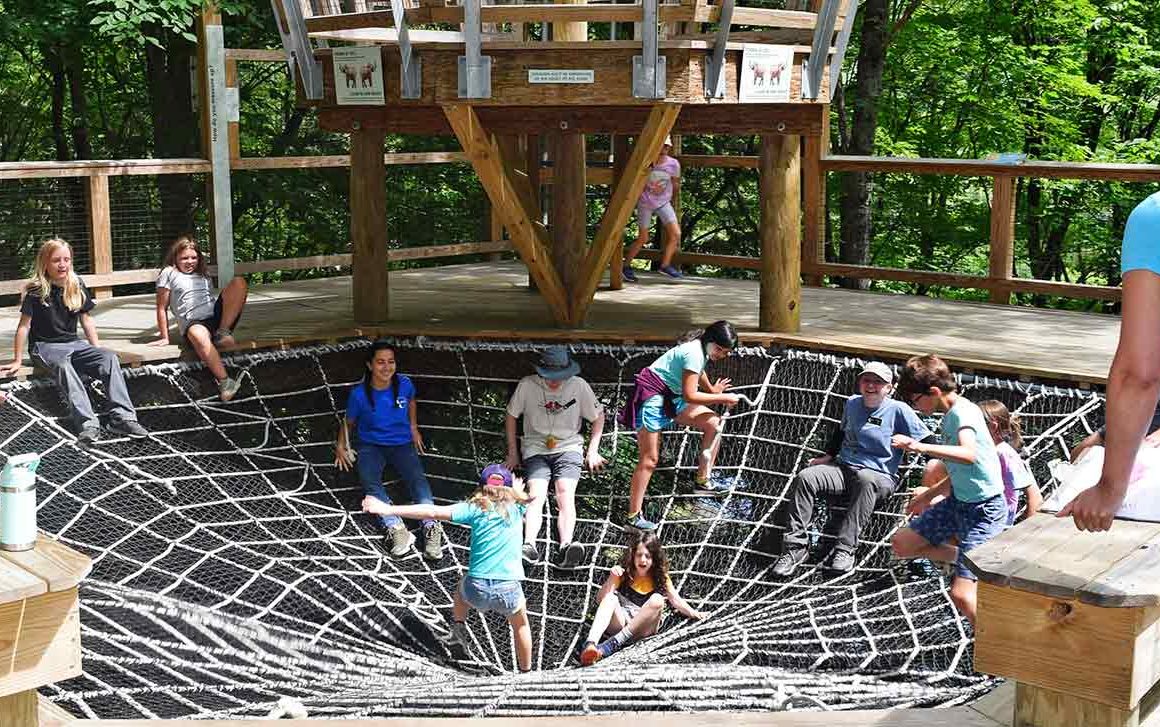 The Ottauquechee River is the connector that has flowed throughout VINS’ (Vermont Institute of Natural Science) 50 years of educating Vermonters on the environment, from its beginnings in Woodstock in 1972 to its current day campus in Quechee in 2022. “It just seems very fitting,” Mary Graham, VINS assistant executive director, says, “We’re here on the Ottauquechee River now when we were founded in 1972 to clean up the river, so there’s that wonderful connection from the beginning until now, over the last 50 years.”

The origin of the VINS lies in a case to clean up the Ottauquechee River. In the early ’70s, Dr. David Laughlin, one of the four co-founders of VINS alongside Sally Laughlin, Rick Farrar, and June McKnight, spearheaded a study of the river. “The river is the key to understanding VINS and how VINS got started,” Dr. Laughlin says. Dr. Laughlin’s dental practice in Woodstock was right on the river: “I noticed certain evenings the river would turn blue or yellow or red,” he says, and he figured out it was from the mills dumping their dyes in at the end of the day, “And of course, there was no life on the river – nothing could live in here.” He recalls that while seeing plays at the Little Theater, the audience couldn’t bear to stand outside during intermission due to the stench coming from the river.

Soon a dental patient of Dr. Laughlin on the regional planning commission asked Laughlin to head up a committee to study the river. Laughlin quickly teamed up with his friend Rick Farrar, a science teacher at a local Woodstock school. The two, alongside some of Farrar’s students, conducted the study and found the river was severely polluted by waste and runoff. This study led to an extremely difficult legal battle with local towns to clean up the river, and, in a jury trial set-up, Laughlin and his cohorts were victorious.

From this grew the beginnings of VINS as an environmental education and research organization. “We were all having dinner at my house,” Laughlin said of himself and his co-founders, “And we said there’s got to be a better way to do this. We started talking about having an organization to teach children, to get children excited about the environment. And so the whole philosophy of VINS has been that.”

VINS started its educational journey with Summer Discovery camps and its Environment Learning for the Future (ELF) program, which trained volunteers to teach environmental topics to children. The first workshop was led by Sally Laughlin, and, in 1976, the program received the Governor’s Award for Distinguished Service to Children and Youth.

“The four of us who founded VINS, all really were necessary to have it happen. It would have been impossible without the four strengths we had. All four of us were committed environmentalists before that term was even acceptable or known,” Laughlin says.

Farrar was an innovative educator and a “bird guy.” “Another piece that Rick brought to VINS was the bird-banding. He was   an ornithologist with a license to bird band,” Laughlin says.

The clean-up of the river was well underway and sewage treatment plants were installed in several local towns, so, while still testing water quality and working with the state water resources department, the VINS co-founders decided to pivot the main focus of the organization to birds, specifically raptors, as a way to connect their students and visitors with nature. People had been regularly bringing the group injured birds, and they decided to build a raptor center for rehabilitation. With assistance from a world-renowned Canadian raptor rehabber, Kay McKeever, Laughlin and his cohorts built the very first raptor center ever open to the public: “We realized the value of having people excited about seeing raptors. It’s pretty amazing when you see these birds.”

The early 90s saw VINS as the first Vermont organization accepted into the National Network of the Alliance for Environmental Education and, for VINS 20th Anniversary, Governor Dean proclaimed July 30th, 1992 as VINS Day. VINS welcomed scores of visitors, bringing in nearly 25,000 people a year to its Raptor Center. “We were really surprised at how much people wanted to see it,” Laughlin recalls.

With this success, VINS began to outgrow its Woodstock space and started a search for a new location, finding a gravel pit just above Dewey Pond in Quechee to be just the spot. After an exhaustive statewide search, Laughlin recalls suddenly thinking of the unused land while driving by on Route 4 to Hanover with his wife, Janet.

In a stroke of luck, the owners of the land agreed to sell to VINS. Laughlin was instrumental in making the move and worked tirelessly alongside Senator Jim Jeffords to secure the necessary funding and support. In 2003, the groundbreaking was led by Senator Jeffords and on June 12th, 2004 to a crowd of 1,200, the Raptor Exhibits opened with 22 birds of prey and a design award from the American Institute of Architects for the renowned architect Peter Bohlin to boot!

Laughlin recalls the event as “one of the best days of my life.” He fondly remembers overhearing a little boy excitedly telling his mother and father “‘I thought this was going to be boring, but it wasn’t!’” Laughlin was standing next to one of the major donors at the time and recalls that she asked him: “Did you set that up?” with a laugh.

“It was an extraordinary effort. The move here gave them a chance to reimagine what VINS could be,” Charlie Rattigan, current executive director of VINS, says. Rattigan honors the work of the co-founders and previous executive directors, who, he says, “kept VINS going and kept it growing,” even during difficult times, expanding school programming and in 2013 opening an overnight summer camp at the Old Pepper Place in Washington, Vermont.

A long-time nature lover, Rattigan came to VINS in 2014 after working as a Natural History television producer and documentarian and Nature App creator. Rattigan found his way to VINS when a former trustee – knowing Rattigan was a “bird guy” – recommended he stop by and check it out.

Rattigan, alongside Graham, has been instrumental in making VINS as we know it today. “We’ve been extremely lucky to have Charlie and Mary here,” Laughlin says, “They’re superb at what they do.”

“We have transformed VINS over the last eight years,” Rattigan says. He is certain to note the integral part the VINS staff have played in this transformation, “It’s been very much a cooperative effort.”

The support of VINS from patrons, members, and donors, Rattigan says, has been fantastic; the generous contributions and gifts VINS has received and the grants they’ve been able to secure have allowed them to pursue new exhibits and spaces, such as their Birds Are Dinosaurs exhibit, created primarily by in-house staff in their newly winterized Neil Pavilion and their adventure playscape for kids, which features “climbing, crawling, balancing – all of those important things with a nature bent outside in the environment.”

Rattigan and Graham have strengthened and stayed true to VINS’ original mission of children’s education. VINS has continued its school programming, reaching over 25 different schools in the area and about 3,500 students a year. Graham mentions a charming 43-year old turtle named Turt who “goes on the road” with VINS. They’ve also expanded into early childhood education programs, and summertime brings even more students to VINS with day camps that are bursting at full capacity with children from all over the area and a mile-long waitlist.

VINS also continues to host educational efforts for all ages on-site focused on the natural history of bird species. The programs tackle “the challenges that these animals face in the wild, the habitats that they need, challenges presented by climate change and how that’s affecting them,” Rattigan says.

The well-known owl and raptor residents are often part of this programming. A special favorite of many visitors is “LaGuardia,” a snowy owl who made her way to Vermont from the eponymous airport. All VINS resident birds can no longer be released back into the wild and include local rescues such as red-tailed hawks, screech owls, peregrine falcons, and a particularly ornery bald eagle. “VINS provides an opportunity for people to experience the outdoors and some wondrous things represented by these extraordinarily beautiful birds you rarely get to see up close. It’s amazing when you can get eye to eye with a bald eagle,” Rattigan says.

Reaching both young people and adults is vital to VINS and the health of our environment, Rattigan says. VINS also works with teachers, offering a program for teacher education. The director of VINS school programs has recently been asked to be a national spokesperson and instructor for NGSX, a teacher professional development program.

The brand new songbird aviary opened by VINS in July 2022, Rattigan says, also presents an opportunity for VINS to talk about environmental crises, such as those facing songbirds. This walkthrough aviary houses previously injured songbirds hardy to the state of Vermont and at the moment, patrons may spy familiar faces such as robins and cardinals and more unusual feathered friends such as bohemian and cedar waxwings.

Here in Quechee, VINS continues to expand on its roots of bird rehabilitation. They’ve recently created the Bird Mews, a heated space for birds who would normally migrate to stay during the winter; expanded and renovated the rehab center; and added a waterfowl rehabilitation enclosure they affectionately refer to as the ducky pool. Currently housing between 80 and 100 birds, VINS saw a large spike in intakes during Covid, with about 1,100 birds coming in last year. “It’s important for people to know they can rely on us,” Graham says. She recalls how warm she feels knowing they can help when answering a call from a child saying they have a sick bird and they want to bring it to VINS to help it get better. “People will do almost anything to save an animal. It’s amazing.”

Of course, no discussion of VINS is complete without mention of the canopy walk. The canopy walk is a piece of which both Rattigan and Graham are particularly proud. The genesis of the idea was found on a trip to Costa Rica; Rattigan brought the idea to the board to create one here on the VINS campus. The ADA-compliant structure opened in October 2019 and now features favorites such as the climbable spider web and the chance for visitors to spot tree-top dwellers such as Scarlet Tanagers. The canopy walk also offers a spectacular view of the Ottauquechee River  – where VINS still tests the water quality – which is now a healthy home to many species thanks to the work of the four co-founders of VINS 50 years ago.

In 2021, VINS welcomed nearly 70,000 visitors, a record for the organization. Laughlin, Rattigan, Graham, and the team at VINS hope that they will continue to keep growing over the next 50 years. “Environmental issues are becoming much more complex and people need good, valid information,” Rattigan says, “We want to be in a position where we can present good science and we can introduce the environment, nature, and the outdoors to young people, and to kids.”

And this, Laughlin says, is the key to VINS’ success: “It’s just the most important thing. We have reached literally hundreds of thousands of kids over 50 years. That is the key.”

« Previous post
Quechee Celebrates 20 Years of the CHaD Gala
Next post »
April & Ben: The Team Behind Farmer & The Bell Donuts