Travel Through Our Area: From Horses to Horsepower 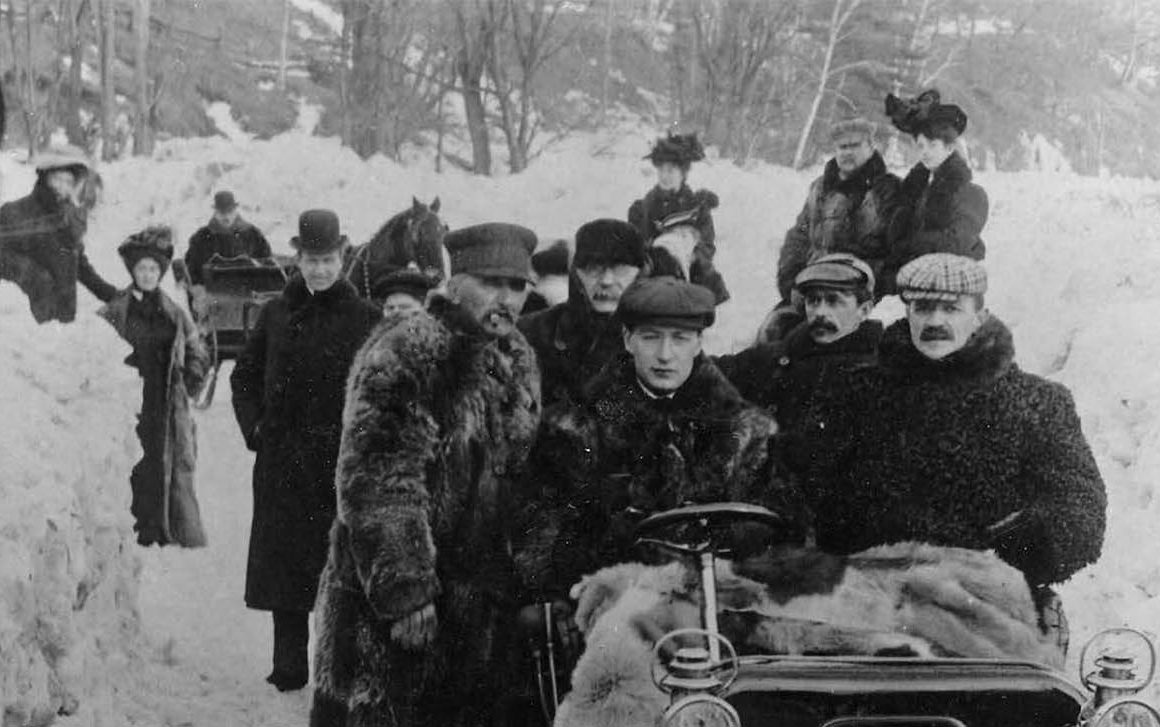 The modern roads and bridges that crisscross the Quechee/Hartford/Woodstock area allow visitors and residents easy access to almost anywhere they wish to go. Want to go to dinner in Woodstock? Maybe attend the Quechee Balloon Festival? Or get to Northern Stage in WRJ for a performance? If you allow a bit of time to find a parking spot, or compensate for possible inclement weather, the actual travel is usually fairly easy and pleasant. Of course, being so familiar with quick travel, minor inconveniences get us frustrated.

Imagine the frustration, then, that might have occurred with those making trips throughout the area 100 or more years ago. Prior to the advent of rail travel, which took hold in the area in the middle of the nineteenth century, most travel throughout our region took place via horse and carriage or wagon. Transporting people or goods was a slow and tedious process over the trails and roads that existed at the time. The thinly populated area, consisting mostly of farmers, had little in the way of transportation opportunities away from the Connecticut River. The river was the major transportation conduit at the time, allowing goods and raw materials, especially lumber, to move downstream to the larger population centers, and upstream, to supply needed goods to area residents. As a result, the first Upper Valley population centers grew up along the river’s banks.

Of course, boat and barge travel on the Connecticut was not smooth and unencumbered. Rapids existed, including in the Upper Valley region, necessitating the need for a series of locks to bypass the rapids, for shipments on the way downstream to Hartford, CT. Olcott’s Falls, near White River Junction, was the major obstacle that needed to be addressed in our region. In 1796, approval for the building of locks and a canal around Olcott’s Falls, along with a bridge to span the Connecticut, came about. With the completion of the canal and lock project, river travel opened up as far north as Wells River, VT. 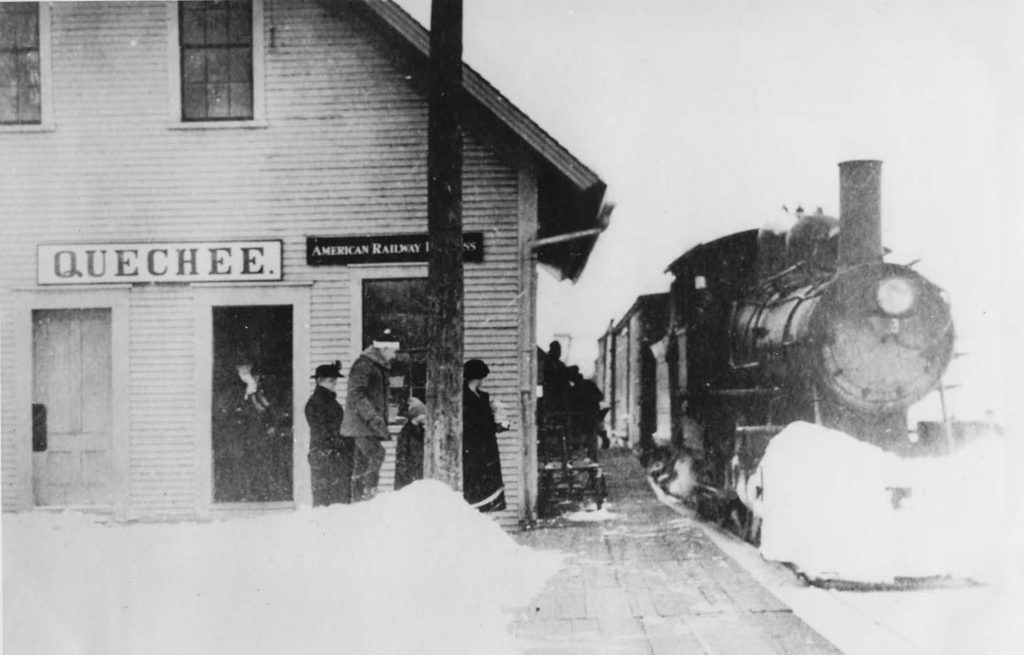 The Advent of Rail Travel

Rail travel to the Upper Valley became a reality in 1848, as rail lines connected the area to the region’s larger cities, and beyond. White River Junction became the hub for the area’s rail traffic. It took a bit longer to connect Quechee and Woodstock with rail service, however.

Farmers, business owners, and residents of Hartford, Quechee and Woodstock saw the economic opportunities created by rail service, and
joined together to establish a rail line between White River Junction and Woodstock. Work began on the project in the late 1860s, but a national economic downturn in 1871 halted the project. Finally in 1875, the line was completed, and the first trains operated on the fourteen-mile long stretch of rail line.

Freight was an important part of the work of the new Woodstock Railroad. Farm products and lumber traveled on the freight cars, as did raw and finished products to and from the numerous Quechee mills in operation at the time. The largest of these mill operations, Dewey’s Mills of Quechee, saw tremendous growth with the rail line. Mill founder A. G. Dewey also served as president of the Railroad, signifying the rail lines importance to his mill operation.

The Woodstock Railroad opened up the area to passenger and tourist traffic as well. Business moguls such as Frederick Billings, who established the state-of-the-art Billings Farm in Woodstock, entertained many prominent people in Woodstock. News of the beauty of the area, and the recreational opportunities spread, and soon Woodstock became a popular vacation destination. Vacationers rode the trains from the cities to White River Junction, then rode the Woodstock Railroad (later the Woodstock Railway) to the growing lodging establishments in and around Woodstock. After arriving at the Woodstock station, it was horse, coach and buggy that delivered the arrivals to the doors of the inns and resorts.

Summer and fall were not the only seasons visitors flocked to the area for rest and recreation. Winter sports, including skating, horse and sleigh riding, skiing and snowshoeing grew in popularity, making the region a year round destination, and adding to the viability of the businesses that served these visitors. Travel to the area in winter made for some difficult work for those running the towns, railroads, and resorts. Snow removal, then as now, was a constant ordeal. Extra help and equipment was necessary for keeping the rail lines and roads passable in the winter. Devices could be attached to the front of the locomotive to clear snow from the rail tracks. Before the advent of trucks, town roads were kept passable by means of a huge wooden roller. Pulled behind a team of horses, the roller packed down the snow instead of moving it off the road, which left a good, packed surface for the horse and sleigh travel. The idea behind these snow-packing rollers is far from outdated today – that same technology is used out west, where extreme snowfalls occur.

A side note here about the role of the horse. While the work of the teamster (the term for men moving cargo with horses and wagons) declined somewhat with rail service, horses, carriages and sleighs were still necessary for road travel in and out of town, and transporting guests to the burgeoning resorts and inns. As mentioned the horse teams also pulled those huge, wooden cylindrical snow rollers, making winter road travel possible.

Rail travel in the area peaked in the late nineteenth and early twentieth centuries. But by the second decade of the twentieth century, the introduction of mass-produced gas powered trucks and automobiles signaled its downfall. The local Woodstock Railway fell on hard financial times in the 1920s, and the last run by a locomotive pulling railcars over the tracks took place in 1933. 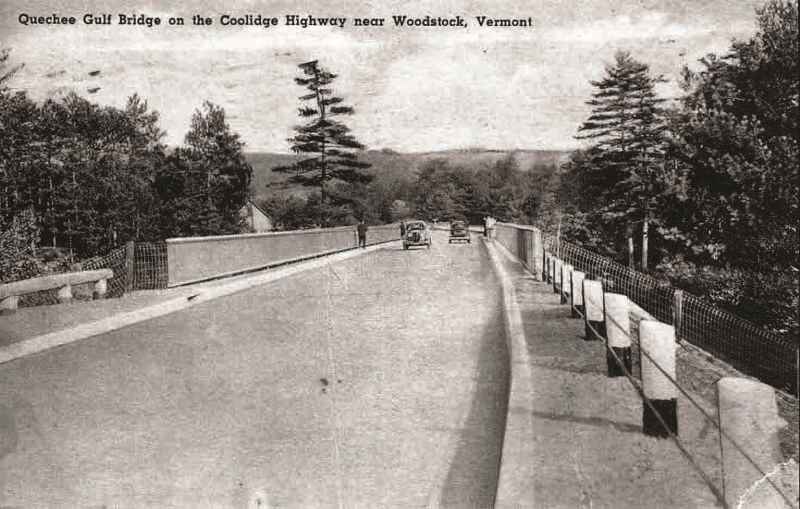 The Age of The Automobile

The end of rail traffic between White River Junction and Woodstock did not decrease visitor traffic to the area, but increased it. The path of the old Woodstock Railway was designated the route of a new paved road, Route 4. Rail track was pulled up, and in its place a new concrete highway was built. The formidable Quechee Gorge bridge, built and rebuilt to handle more and more rail traffic, As was true at the turn of the century, winter recreation activities brought in many visitors. In the 1930s, skiing was becoming more and more popular, in part because of a local innovation. In 1934, the first rope tow went into operation on Gilbert’s Hill in Woodstock. Ski hills became much more accessible as a result, bringing an even greater influx of winter enthusiasts.

With the new highway bringing in more tourists, particularly those of more modest means, motor lodges and motels sprang up along the route. Along with those, diners and other tourist related businesses resulted. These new economic opportunities brought about new energy for the region.

The biggest change for Vermont and our region with regard to auto transportation was the building of the interstate system. Between the
late 1950s and the 1970s, the construction of I-89 and I-91 further increased the ability of urban dwellers from the metropolitan areas of the east coast to visit and settle in the region. It also affected the economic face of places such as Quechee and White River Junction, as the mills, railroads, and manufacturing concerns gave way to more service and tourist orientated businesses.