February 20, 2015by adminQTNo CommentsAll, Made in Vermont

Tradition is Just the Beginning 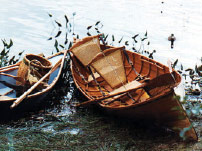 What do you call an individual who is able to merge form and function in an artistic blend? Is he a craftsman, an artist or an engineer? Whatever your choice might be in North Pomfret they call him Captain Dan Embree, a retired Merchant Mariner who constructs his unique Adirondack guide boats in a small “shipyard” at the end of Bunker Hill Road.

Graduated in 1973 from the New York Maritime College at Fort Schuyler, Captain Embree spent 23 years in a seagoing career, which culminated in his command of the 55,000-ton vessel American Cormorant. This heavy-lift, semi-submersible, converted tanker was utilized to transport such unique cargo like oil derricks, which were floated onto its decks or barges chock-a-block full of military hardware and explosives. A ship much like this one transported the damaged U.S. Naval guided missile frigate USS Stark after a disastrous missile attack on May 17, 1987.

In 1990 Embree began experimenting with his first boats many of which never met his critical approval and were thus consigned into very expensive firewood. By 1995 he had perfected the boat building process and the first classic Adirondack guide boat rolled out of his barn. Dan had seen enough of the seagoing life by that time and retired to his home in Vermont.

Evolved from a hunting skiff, the Adirondack guide boat has remained virtually unchanged since the 19th century. The boat is known as being the fastest fixed seat rowing boat and was used by sporting guides for their clients who traveled to the Adirondack region from New York City. Seeing as the occupants of the craft are sitting almost on the bottom of the boat the vessel is more stable than a canoe and, unlike a canoe, it is rowed not paddled.

Your initial impression of this gleaming craft is to simply want to hang it from the rafters of a large, rustic house, perhaps set it in your living room as an exquisite coffee table, display it and show it to your friends. These are good ideas – all of which have been tried. However, every boat is a rugged and working machine designed to last a lifetime of rowing and fishing abuse. Each boat is completely unique in its size, shape and engineering, however typically one will be constructed with a stunning blend of spruce, fir and rich cherry wood. Solid cherry oars set into antique brass oarlocks set off the look of the hull while wicker seats where the rower and the passenger face each other for intimate conversation give the interior an old-fashioned and Victorian feel. The whole package just makes you want to grab a fly rod, a picnic basket, or your best girl and set out on the lake for a Norman Rockwell Sunday excursion. Oh yes, and don’t forget your parasol and straw boater in order to be the very height of fashion.

Now don’t get me wrong on this, these are not sissified craft. Au contraire mon ami! Dan’s personal boat has been rowed for an estimated 3,000 miles over the last 20 years. It is still as reliable and solid as the day it rolled out of the shipyard and every single craft meets the same exacting standards.

The handcrafted guide boats do not come cheaply as one might suspect given the solid materials and upwards of 300 man hours to construct. Seven thousand and five hundred dollars for a 12-foot boat is a reasonable estimate. Allow a little extra time for launching the eye-catching dark blue hull from your favorite site since you will quickly discover that you are the envy of every individual on the lake as you answer myriad questions and receive dozens of compliments.

See you on the lakes!