The USNA website describes Plebe Summer as a demanding orientation that begins four years of preparation of midshipmen to become naval officers. An education at the USNA could be divided into three equal parts: first, the six weeks of Plebe Summer; then the plebe year; and finally the rest of the stay at the Naval Academy. During Plebe Summer, the physical and mental demands are intense as the plebe develops the leadership ability, motivation, moral strength, physical skills and stamina required of an officer.

The decision to apply for admission to a Military Service Academy is a big one. Not only are admission standards very high, the application process is daunting. Applicants are required to obtain a nomination to the school by their congressional delegation, the vice president or president of the United States. Tom received nominations from Vermont Senators Patrick Leahy and Bernie Sanders and from Congressman Peter Welch in support of his applications to the Naval and Air Force Academies. His first choice was the USNA. Fourteen Vermont residents received nominations to the Naval Academy; four—including Tom—will matriculate as members of the Class of 2019. He was one of 1180 members chosen from 17,125 applicants—that’s competitive! “It is an absolute honor to be a member of the Class of 2019 at the US Naval Academy. I am honored and forever grateful for this opportunity,” he says.

Each midshipman receives minimal taxable pay, which can be used to pay for textbooks and uniforms, free room and board, and there are no tuition or fees. Following graduation, a minimum tour of duty—usually five years—is required. If the student’s chosen occupation requires extensive training, the tour of duty could be longer. Tom is interested in aviation—he wants to be a pilot, which requires a higher level of training, focus and commitment.

Of Tom, Leahy says, “Being nominated to the Military Academies is a rigorous process and Thomas was extraordinarily well qualified. I was highly impressed by his initiative to involve himself in high school activities and in his community. He has shown superb leadership qualities and a strong desire to serve our country. I am confident he will be an outstanding representative of Vermont.”

Golf is one of Tom’s skills and passions. He was the Quechee Club Junior Club Champion in 2013 and 2014. Steve Rogers, Quechee’s head golf professional says that, “Tom Jenkins is a fine example of what a young gentleman should be. His family and family values are reflected in his daily habits. Tom matured through the ranks of our Junior Golf program, eventually winning the Junior Club Championship. He was an obvious choice to join the Quechee Club Golf staff when old enough to work. The Jenkins family should be quite proud of both of their sons. Congratulations to the United States Naval Academy! The Quechee Club’s loss is this country’s gain! “ 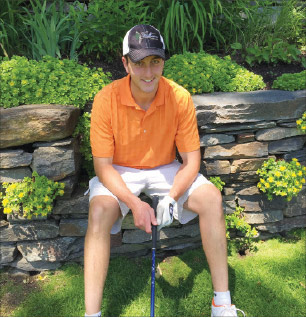 Tom has a very proud and supportive family. My lunch with him, mother Jill and grandmother Judy Johanneson was a pleasure. For the month prior to his July 1 I-Day (Induction Day), Judy offered to make whatever Tom wanted for dinner each evening. Jill actively participates in support groups and blogs for military parents and families. She shared with me a beautiful article from Be Safe, Love Mom – Sisterhood of Military Moms called “No Guts No Glory” about Induction Day in Annapolis. “Their parents stand and watch with hearts full of pride and eyes filled with tears as the next generation of our nation’s leaders begin their journey toward honor, courage, commitment and service.” Wow!

So – “why the Naval Academy” I asked? Tom explained that he looks forward to “pushing himself, to the challenge, to something different and to a career in service to people and country.” Jill points out that service is a family tradition; Tom’s father is a Vermont State Trooper, his grandfather was in the Navy and his great grandfather served in World War II. Indeed, Tom follows in their footsteps and is a source of pride for our little Village of Quechee.

Since Tom left for Annapolis, the family has received one phone call (of the three allowed calls during Plebe Summer). Jill and Judy report that, “he likes it!” He related with amusement that when a plebe is late for morning call, all the other plebes must drop to the floor in “plank” position and chant “Waiting for our classmate, Sir.” Of course, most importantly, the food is good!

In preparation for this article, I watched a great video – USNA – The Making of an Officer”. Check it out at https://www.youtube.com/watch?v=6_6PLATuS_Y. Or the USNA site at http://www.usna.edu/homepage.php.