August 24, 2021by adminQTNo CommentsAll, How They Met

The Story of Joe and Carol McEntee 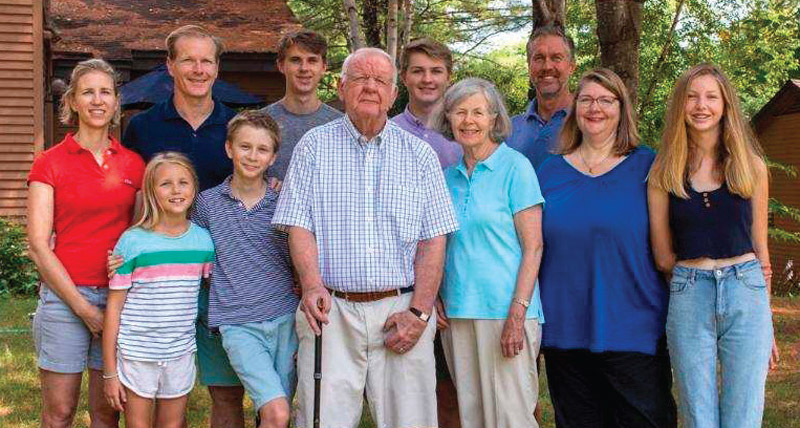 As told to Jessie N. McEntee

My wife, Carol, and I met at a party before a football game at Cornell in 1962. I was a junior and she was a freshman. She came as the date of a friend of one of my fraternity brothers. I learned that she was engaged to a Swede who worked for her mother’s firm back in Rochester, New York. This piqued my interest. And, she was very pretty and feisty.

“Could you hold my cigarettes? I don’t want to smoke anymore,” I said. I thought it was a great line, and she thought it was the dumbest thing she’d ever heard. A couple of weeks later, she needed a ride back home to Rochester, and I had a ‘48 Chrysler. She heard about my car and called me for a ride, but she didn’t remember me from the party. When I pulled up to her dorm to pick her up, she was shocked.

We started dating, and I knew she was engaged to this Swede because all of her friends in her sorority had ratted her out. She’d say things like, “I have a friend who’s engaged to someone, but she likes this other guy better.” Of course, I was the other guy. For Parents Weekend in 1963, I told my father that she was the girl I was going to marry. We’d just started dating, and I had a girlfriend back home. My father was a man of few words, but he approved of her. We got pinned, which is more than going steady and short of being engaged, and then I asked her to get married in the late spring of 1964 when I was about to graduate. To my great shock, she said yes. I didn’t sleep that night because I realized I had done a momentous thing.

I graduated from Cornell on a Tuesday and was commissioned in the Navy the next day. We got married on Saturday, and I went to sea the following Monday on the USS De Soto County, LST 1171 out of Norfolk, Virginia. I went on a big operation over to the Mediterranean, where I was gone from September to November. I spent two and a half years in the Navy while Carol finished her degree in education and graduated from Old Dominion University. I then went to law school at the University of Michigan, from which I graduated in 1969, while Carol taught elementary school. Simultaneous with my graduation, our daughter, Laura, was born.

On a side note, for those of you who remember S & H green stamps, we arrived in Ann Arbor with many books of them, which I insisted on using to obtain a delicatessen bologna slicer. Carol pointed out bemusedly that we wouldn’t necessarily need to be slicing fifteen pounds of bologna at a time. We nevertheless carted this monstrosity from Ann Arbor to Rochester to Cleveland and finally Dallas, where the bologna slicer met its demise.

I started practicing with a law firm in Rochester, NY now called Nixon, Peabody. I spent most of my two and a half years representing Kodak company in a massive lawsuit against Fotomat Corp. I left and joined the Jones Day law firm in Cleveland, Ohio. Our only other child, Justin, was born in Cleveland. I litigated a variety of anti-trust cases and other commercial litigation. I became a partner at Jones Day in 1977, and in 1982, the firm asked me to head up litigation in our new Dallas office. During this period, I spent most of my time representing Texas Instruments in patent/anti-trust litigation against Japanese and Korean silicone chip manufacturers. I also did work for Frito Lay. You could say I was the defender of chips.

Having been successful in Dallas, the management of my firm in their wisdom sent me in 1988 to head the litigation section of our newly-opened Chicago office, where, on a more local note, I represented Victor Kiam in his server-year unsuccessful attempts to retain ownership of the Patriots. Carol was doing the hard but wonderful job of raising our children. We sent Laura off to Dartmouth and later Justin to Cornell. Meantime, at the behest of Texas Instruments, the firm sent me back to Dallas in 1994.

Laura married Erik Bierwagen, who she met at Dartmouth, in 1992. They moved to Los Angeles and later the Bay Area. Justin married Jessie Noyes in 2003.

We began looking for some place to escape the heat of Dallas in the summer, and we considered various locations including Cape Cod, Hilton Head, and Quechee, which we learned about from Laura, whose sorority had held a function at the Quechee Club. Laura and Erik were pleased at the idea of being close to Dartmouth, which they’d both loved, and we were pleased with Quechee, since we both played golf enthusiastically albeit ineptly.

We first came to Quechee in 2006, and we rented for a month and then extended our stay for six weeks. On the way out for our return to Dallas, we bought a condo on Coach Road. All of our five grandchildren have actively participated in golf and tennis lessons and enjoyed the beach at Lake Pinneo, the pool, and the camp programs. Also, Justin and Jessie and their kids have had the opportunity to use the ski facilities in winter, as they’re based in Connecticut. Like many others, whenever our family arrives at Quechee, we draw a sigh of relief, and all tension fades away.