May 20, 2022by Frank OrlowskiNo CommentsAll, Miscellaneous

The Prouty Remains a Family Affair 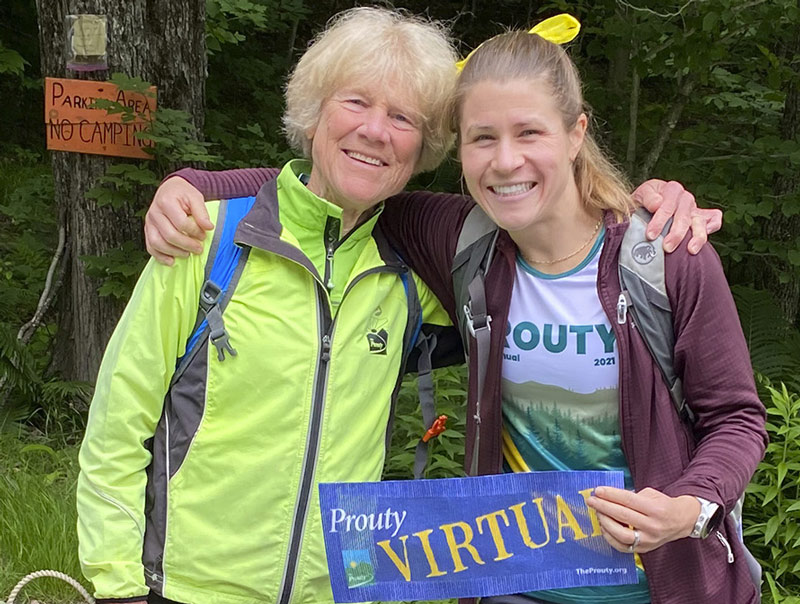 Each year, thousands of Upper Valley residents take part as participants, volunteers, and donors in The Prouty, the annual fund raising effort for the Norris Cotton Cancer Center (NCCC) at DHMC. This year – the 41st for the event – is no different as preparations are well underway for another successful event. Over the years, The Prouty has become a multi-generational endeavor, with entire families involved. That is certainly the case with Quechee’s Krysta Frye Kostrubiak.

“I think of us as being a Prouty family for most of my life. When I was younger, I would walk in The Prouty with a family friend while my parents did their 100-mile tandem bike ride,” says Krysta. Prior to Prouty day, Krysta and father Milt would volunteer on course preparation. “My dad and I would usually go out a day or two before The Prouty and help to set up the route signs, and I helped him to pick up and organize the traffic cones we use along the routes.”

Krysta’s mother, Carolyn, also has many years of Prouty involvement. “My mom got involved with the Prouty steering committee after losing her mom to cancer in 1995,” says Krysta. It’s often the case with many Prouty volunteers and participants that a loved one’s bout with cancer serves as the impetus for involvement. For Krysta, her involvement hit close to home again when her mother was diagnosed.

Many participants in The Prouty form teams in honor of those battling cancer. Krysta’s team is titled ‘For The Mamas.’ “The name For The Mamas is to honor the mamas of three close friends, and my mama, and their battles with cancer. All four mamas were or are being treated at the Norris Cotton Cancer Center.” The treatments Carolyn Frye received at the NCCC have proven effective. “My mom has finished her treatments and is doing well,” says Krysta.

This personal involvement is a common theme for Prouty supporters and participants. The scourge of cancer seems to touch everyone’s lives, and having a hand in fighting it is a morale booster. “I think of it as an event to recognize and honor those battling cancer, survivors, and those we have lost to cancer,” says Krysta. “When my mom was diagnosed with metastatic melanoma and needed surgery and immunotherapy, The Prouty had new meaning for me. No one’s journey with cancer is easy, but we are so lucky to have the Norris Cotton Cancer Center close by.”

During the past two pandemic summers, The Prouty was primarily a virtual event, with participants taking part in various activities around the area, the country, even the world. (For example, this writer rode his recumbent trike in western Colorado as a fundraiser during the 2020 Prouty.) For last year’s Prouty, Krysta and mom Carolyn hiked together on local trails. Additionally, “My parents biked in the spaced-out, smaller, Covid-modified in-person Prouty,” says Krysta.

This year’s Prouty resumes as an in-person event, held on July 8 and 9, with walking, biking, golfing, rowing, and other events taking place on this weekend. As in the past, the Richmond Middle School in Hanover serves as the gathering and celebration point for the event. Still, The Prouty offers a virtual option for those not in the Upper Valley on that weekend.

Plans and training for the 2022 Prouty are going well for her family, Krysta reports. “My parents have been biking a lot already this spring. [On]April 30, Team Hope put on their first-ever official Prouty Chili Cook-Off. My amazing teammates and my parents from team For The Mamas rode their bikes there. It was a great kick-off event…”

During this year’s Prouty, “My parents plan to bike again in the in-person Prouty… I plan to walk in the event with my husband and be there to cheer on everyone participating,” says Krysta.

Individual participants and teams like Krysta’s spend much time and effort fundraising for The Prouty. It helps donors to know that the vast majority of funds raised stay right here in the Upper Valley, funding research and patient services at the NCCC.

For a Prouty veteran such as Krysta, she has developed a successful fundraising plan. “I write a personal letter each year that I mail out to friends and family that have supported me in the past. In the past few years, I have also been able to successfully fundraise through social media and by phone. I am grateful for all support in any form or amount.” Her team has an impressive Facebook presence, and has generated substantial donations already for the 2022 Prouty.

Despite the serious nature of the cause, Prouty participants find the event great fun, and Krysta is no different. “When I picture The Prouty, I picture a large community working together toward a common goal. I picture a fun and eventful day where people are getting out and enjoying themselves with friends and family.”