May 11, 2021by Darby LaineNo CommentsAll, Miscellaneous

The Pandemic and a Phoenix Rising: Quechee’s Alex and Cristy Beram become butchers 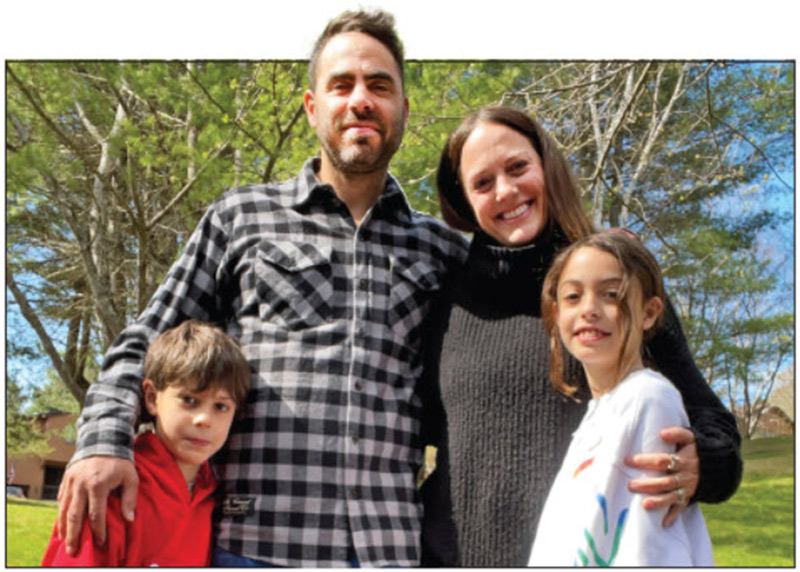 When Alex and Cristy Beram lived around the corner from each other on Willard Street in Burlington, they lived different lives and never met. Cristy was busy finishing her degree in sociology and Italian studies at UVM and Alex was making his name in the local music scene. Years down the line they would be set up on a blind date in their respective new homes in Charlestown, Boston, and twenty years later they would return to Vermont together, a married couple with two small children.

Not long after the two were married sometime after that fortuitous blind date in Boston, Cristy brought Alex on a trip with her brother to the Quechee-Woodstock area where she and her family used to come regularly as children. Experiencing the bucolic Upper Valley with adult eyes and minds brought a whole new appreciation of all that the area had to offer. Cristy’s memories of skiing on Quechee Hill would come full circle when her own children learned to ski there in a few years’ time. The couple bought a condo here in 2018 and began their own traditions by taking advantage of all the seasonal activities right outside their door with extended family coming along to share in the fun whenever possible.

The closeness and bonding that the easily accessible activities of the Upper Valley provided, could not be lauded enough by the family. The ease of abundant life here led the couple to inherently assume they would end up living in the Quechee or Woodstock area full time. The future was discussed in this way without much fanfare: it was obvious. Maybe the move would come when the kids were all grown up, or maybe when Alex and Cristy retired, “it was always going to happen, it was just a matter of when.”

Alex’s résumé ranges from touring musician to artist manager to the Reggatabar Jazz Club manager in Harvard Square, then eventually getting himself into international expansion after earning his MBA at Boston University. Cristy was working for Fidelity at the start of 2020 when the pandemic hit. The prospect of Vermont seemed even more prudent as restrictions around COVID changed the world for everybody, and the family began to assess “how to make the most of the short time” they have together.

Alex says the awareness of being blessed enough to be healthy and safe through the pandemic has only reinforced their choices. When Alex was soon able to work remotely, the decision to transition to their Quechee condo full-time quickly became very real – it was happening! The kids, Rosie in fourth grade and Beau in first grade, have had to process some big feelings around leaving behind the familiar neighborhoods, close family, and friends in Boston. The upheaval the pandemic brought combined with the happy memories of summer camps and golf clubs in Quechee has helped make the kids much more amenable to the transition.

Finally, it was when Alex’s job had to let him go in the fall that the couple returned to an ever-present daydream. Maybe they should try to buy a small business that the family could run together? This would complete the idyllic, tight-knit family picture that Vermont had fostered for them for so long, and it wasn’t unprecedented. Way back when, in Burlington, when Alex and Cristy lived as strangers on the same block, Alex made his way in the food industry working for a variety of cafes, bakeries, and restaurants in town. This had led him to eventually pursue an MBA. And, aside from working from home stuck behind a screen, how could the family really, actually work together and be a part of their new community? The posting to purchase and run Woodstock’s Village Butcher for the retiring former owners seemed like it was put out there just for them.

The Berams love what longtime former owners, George and Linda Racicot, created in the 50-year-old shop. The daily connection with the various community members of the Woodstock area is the part that Adam says will bring them the most joy, and that is what enabled the Village Butcher to thrive for five decades. Happy to have such a fine foundation from which to resume business, the Berams plan on finding and creating what improvements can be made while continuing the long tradition of a small-town butcher full of local sundries, great sandwiches, and a good cup of coffee. The excellent cuts of meat will remain along with many familiar faces. From a market perspective, the Berams feel that they’re familiar with every type of customer that might come through the door, after all, the tourist, the second homeowner, and now, finally, local community members themselves.