August 21, 2014by adminQTNo CommentsAll, Get to Know Your Neighbor 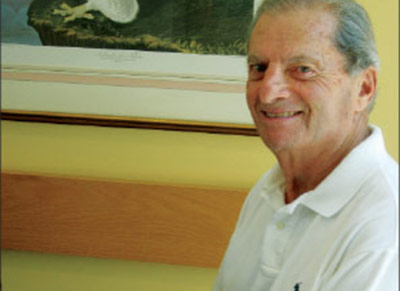 “If you want to find me on Wednesdays, you can come to the hospital [Dartmouth-Hitchcock Medical Center] between 11 a.m. and 1 p.m. I’ll be there, playing piano,” says Quechee’s Bill Emerson. “When I retired I had two goals, to play golf and to play piano.”

Emerson learned to play the piano by ear. His first venture into playing music was in college with a ukulele. He then began to experiment with the piano, and was a quick study. “There was always a piano inside of the frat houses. And when I was in the Navy, there were two pianos on the ship. One in the enlisted men’s quarters and one in the officers’, and I had a lot of free time while we were sailing to Korea and back.”

After his retirement in 1986, he took lessons from two excellent jazz pianists. He learned to read music, after 40 years of playing by ear. He spends most mornings practicing, which he enjoys.

“The hospital gig is my pride and joy,” he says, “but it all started at the Powerhouse Mall. In 1986, after I retired, my wife and I went on vacation. When we came back to Logan airport, someone had smashed the window of our car in the parking garage and stolen the radio. So I went to get it replaced at Car Sounds (now the Electronic Superstore in Lebanon), and they said it would take a couple of hours. So I went over to the Powerhouse Mall to wait, and there was this guy in a tuxedo playing the piano. I thought ‘I can do that!’ and I wrote a letter to Bayne Stevenson (the owner of the Powerhouse Mall). They gave me an audition, and I was in!”

In addition to volunteering at Dartmouth-Hitchcock, Bill also plays professional gigs at events and at places like the Canoe Club in Hanover, the Woodstock Inn, and Wheelock Terrace, to which he was headed after the hospital. He favors classic easy jazz—Gershwin, Cole Porter, the cream of the ’20s, ’30s and ’40s. He loves seeing new generations falling under the spell of these great tunes. He laughs, “It’s great when some kid says ‘Will you play “The Way You Look Tonight” at my wedding?’