February 18, 2020by Virginia Dean with David Barrell1 CommentAll, Around Town 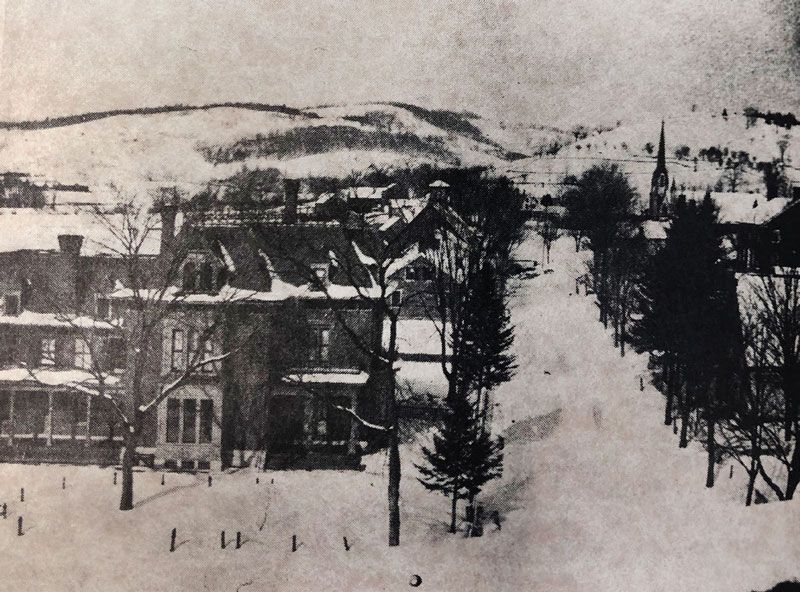 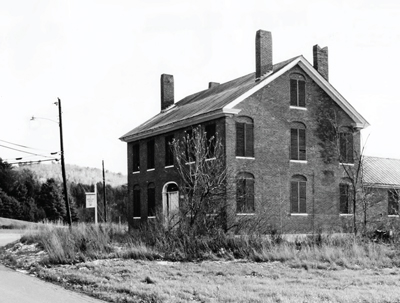 The Strong House circa 1815

In total, the district is comprised of 73 properties. Most are set close to the road in small lots and are residential in nature. The majority are one to two stories, housing single-families, as they were in the 18th and 19th centuries when millworkers comprised the majority of the population.

Here, in Part I of this series, we will provide an anecdotal history of how these 21st century homes came to be and some of the stories that gave each the character that makes it unique today.

To begin, the road that veers off in a westerly direction from U.S. Route 4 by the Fat Hat Factory was originally known as Shallis Hill Road and later became the Clubhouse Road, so named because of the Trout Club that sat behind the current gray house at the corner of Hard Road. The Club was owned by A.G. Dewey who settled in the Quechee area around 1836, establishing a woolen mill.

“It was a popular spot for members of the Lakota Club in Barnard to stop on the way back from Dartmouth football games, drop a line in the small pond to the rear of the house and party down,” David Barrell recalled. “Most Quechee Lakes Landowner members assumed that the name Clubhouse Road emanated from the fact that the Quechee Club was several miles down the road. However, it bore that name before real estate investor L. John Davidson transformed the valley.” 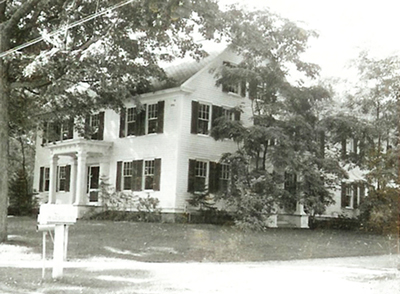 Front view of Marshland Farms circa 1900. Courtesy of the Hartford Historical Society

Through the years, however, the Trout Club became a residence and fell into disrepair becoming an unsightly entrance to the Quechee community.

In 1989, local residents Barrell and business partner Charles Jameson bought the property and began renovations as well as putting up the three-unit Millbrook condos on the adjacent property. Recently, the single residence has had a garage with cupula added.

“The old eyesore is difficult to envision today,” said Barrell. ”We literally had to chase rats out of the basement before restoration began. I remember that Charlie was having drinks with some friends the evening that we made the deal and announced what we were doing. ‘Oh my gosh,’ exclaimed one of Quechee’s grand dames, that’s where I lost my virginity!’”

At the top of the hill is the Fat Hat corner that Joan Eckert, formerly of South Royalton and Quechee, founded in the early 1980s as a retail and production site for her new line of hats and ladies wear.

“The corner now also houses Chef Brad’s Crazy Side eatery with all of its funkiness and great vittles,” Barrell said.

Down the road is the Strong House Spa in the Federal-style brick building at the corner of Quechee Main Street and Dewey’s Mill Road that once housed the Cevas Skiwear Company founded by Fred Andressen,and then a financial services firm owned by Amy Leavitt. “Sheila Armen and Shelly Yusko added a large event building to the Strong House Spa property that enhances the approach to downtown Quechee,” said Barrell.

Armen and Yusko purchased the 200-year-old Jedediah Strong House in 1994, renovating the main building and adding an adjacent farmhouse studio to establish a massage clinic and teaching facility for therapists to teach classes in movement and advanced training.

According to historians, the House was built in 1815 by a local mill owner. Strong had purchased the land in the same year. He was a descendant of one of Hartford’s earliest settlers, was a prominent local landowner who operated a successful sawmill and gristmill nearby. 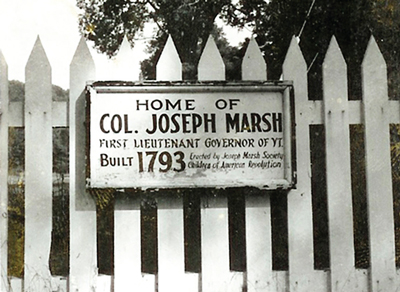 A few hundred yards from the Strong House is the The Quechee Inn at Marshland Farm Built in 1793, the inn was originally the home of Colonel Joseph Marsh IV, Vermont’s first lieutenant governor. Originally from Connecticut, Marsh arrived in Quechee in 1772 and the next year built the Georgian-style house opposite the Ottauquechee River, known as the Baronial Mansion. The self-sufficient farm housed Marsh, his wife, Dorothy Mason Marsh, and their twelve children.

The farm was eventually left to one of his grandsons, Daniel. Over the next 100+ years, the property transferred to many hands including Charles Dempster Marsh, the great-great-great grandson of Colonel Joseph Marsh. In 1959, the Army Corps of Engineers condemned the property that they felt would be negatively impacted by the impending Hartland Dam Project. The landowners were given the option of buying back their homes at a nominal fee or moving the structure to higher ground. The house was moved 90 feet west of its original location and 15 feet north of it. The cow barn and icehouse were destroyed and the horse barn was carried and attached to the section of the cow barn (now the innkeeper’s living quarters).

Then, in 1968, Massachusetts real estate developer L. John Davidson purchased the farm, consisting of approximately 400 acres. The house became the first of many Quechee Lakes Corporation office locations throughout the village. In 1970, Davidson converted a portion of the barn into a stable for the use of the QLC landowners. By 1975, and to meet the demand for overnight accommodations, the Corporation converted the farmhouse into a 17-room inn. Mike and Barbara Yaroshuk, a Washington, D.C. attorney for a major Indian tribe, bought the inn in the late 1970s.

“Mike was responsible for bringing the Balloon Festival to Quechee and was very active in golf and tennis until his untimely death in his mid ’40s,” said Barrell.

The inn now includes 22 guest rooms, three suites, a dining restaurant, and common area for various social functions. The Quechee Inn at Marshland Farm opened officially with a gala celebration on March 31, 1975. Over 200 guests attended the reception, including the great-great-great granddaughter of Colonel Joseph Marsh.

Davidson had come to Vermont with a vision, to build a vacation resort while maintaining the historical past. The Quechee Inn at Marshland Farm fit perfectly into his concept.

In Part II of The Changing Face of Quechee Main Street, after continuing down Quechee Main Street from the Quechee Covered Bridge and, figuratively speaking, visiting some more homes along the way, we will learn how Davidson’s vision materialized.