May 22, 2014by adminQTNo CommentsAll, Cover Story

If life is a series of transitions, Myrna and Dick Brooks know that well. Their “transition” involved moving from urban Phoenix, Arizona, to moving to a house in the woods at the end of a dirt road in Quechee, where they now call home.

In 2002, the Brooks bought a Deck House built in 1972, “the first house on Taft Family Road,” according to Myrna Brooks. The Deck House concept was a popular choice for early Quechee Lakes Landowners Association (QLLA) buyers. Art Garges, the owner of A.G. Design and the architect the Brooks eventually hired for their major renovation, explains that a Deck House representative and builder in the area helped advance this new concept in building to the earliest homes in QLLA. “Deck houses were pre-cut, not modular, often built into the hillside and energy inefficient,” says Garges. “People liked the open ceilings and exposed wood,” he says, as well there being a lot of windows to help bring the natural light from the outside in.

The house after renovations.

The Brooks’ house, like many in Quechee, was painted a dark color to blend with the natural landscape. That natural landscape was dense with white pine, hemlocks and maple trees and got denser each year. Dick Brooks said the former owner, now in his nineties, returned to the house recently. “He didn’t seem interested in the house renovation, but in the hill on one side of the house, where he toiled every year to clear the growth,” says Dick.

In the first three to four years of owning the house, the Brooks came twice a year for two-week stays until Dick retired from his medical practice and Myrna from her education career. At first they spent their summers in Quechee and winters in Phoenix, until they realized living in Quechee fit them best.

Wanting to make their dated house feel more like home, they decided to screen in the ground level porch facing their westerly view. That renovation started the Brooks thinking about how to improve the quality of their life in a home best suited to comfort, efficiency and beauty. Garges was the one who brought those ideas into a workable plan, with more light, a slightly larger footprint, updated kitchens and baths, and new siding. “The house was dated, a little too small, humid at times and dark,” Myrna said. “I was so excited about how well and beautiful it’s turned out that I wanted others to know it’s not that tough to convert [a Deck house,]” she says.

So just what happened to transform the old place into modernity, efficiency and beauty? Well, finding the right builder to start. Local resident Steve Dandeneau, the owner of River Street Construction, was just back from building houses on Martha’s Vineyard, met the Brooks’ standard.

A two-car garage was the first phase of construction. The newly configured house has the new siding, now not so dark and with a complementary trim. 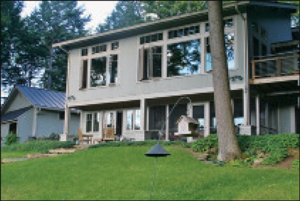 Half the roof came off and a clearstory window on the added raised roof sheds more light on the great room. The exposed brick on the upper chimney is now inside, with a new face for the three-story chimney – a textured, layered stone tile.

The small entrance is larger, embracing the living room above. Most Deck Houses have a mid-story or mid-level entrance, according to Garges. The west side of the house, opposite the entrance, also became larger, expanding the living room and master bedroom on the main level. New white birch flooring blends in with the original floors. The kitchen, enlarged along with the entrance, contains an island with recessed shelves for dishes and cooking utensils. Granite tops cover that island and counters. A simple and unadorned Arts and Crafts dining table sits in an almost separate area nearby. Lauren Collins of Cabinetry Concepts in Lebanon, New Hampshire, was the guiding light for this kitchen design.

On the bottom level a living area with comfortable sofas and chairs serves as a den. There are several additional bedrooms; one for the grandchildren and Myrna’s office (Dick’s is upstairs.) A laundry room with a cedar closet, sinks and counter space completes the lower level. 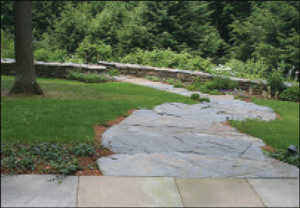 The windows are new and energy efficient and styled in the Craftsman tradition. A new heating system assures energy savings and consistent performance.

Dick, a Dartmouth College graduate, familiar with the area introduced Myrna to Vermont. “Luckily she liked it,” Dick said. The Brooks love living here. They visit Phoenix in the winter, but maybe not as often as they used too since Myna has taken a liking to cross-country skiing and looking to downhill ski next. They both play golf and tennis. Dick, a gastrointestinal physician, volunteers at the medical school at Dartmouth teaching first year medical students the art of physical examination.