May 31, 2016by adminQTNo CommentsAll, Green Page 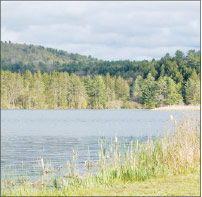 The pond is a former oxbow of the Ottauquechee River, just upstream from the Quechee Gorge. A 1940 photo shows the oxbow; “somewhere along the way,” says Nunez, the loop was dredged and the material used to form a dike between the river and what was now a pond. According to a history of Quechee, the dike was built in the early 1970s. Quechee Lakes Landowners Association built the dike with more than 60,000 cubic yards of dredged material, for about $250,000. Lake Pinneo was built around the same time.

Back in the day, the pond’s clarity appealed to swimmers, and it was deep enough to maintain a fishery of pike, bass and bluegills. In the winter, it offered skating and ice fishing. But the pond has been silting up slowly over the years, and Tropical Storm Irene, in August 2011, dumped a major load of silt and detritus into it. “The pond is filling up on its own,” says Nunez. “Irene just put it on fast-forward.” Invasive Eurasian milfoil that had been trying to establish a toehold in the pond flourished in the new, pond-wide shallows, overwhelming the efforts of remarkably devoted volunteers to beat back the infestation. Left alone, the pond will gradually silt in, becoming a swamp.

Action on the problem is complicated by layers of ownership. “It’s owned by the Army Corps of Engineers, managed by the State, leased to the Town and worked on by nearby people,” says Sheila Armen, who owns the Strong House Spa, which borders the pond. She remembers when the pond was clear, beautiful for swimming, “but now it’s too shallow—mucky and weedy. I don’t even ice skate. There are trees and washing machines that came down during Irene sticking up through the ice.”

“A lot of people have to come to the table to make this happen,” says Armen. “It’s not just milfoil; the earthen dam is wearing down, and the floor of the river is coming up,” so more water—and silt—goes over the dike. According to Nunez, the Corps has asked the State to come up with a plan, and indicated that the Town should not have been working on the pond (pulling milfoil) in the absence of a master plan. The Town has received a grant from the State for milfoil suppression.

Working hard in office and underwater

Some of Nunez’s greatest praise through this process is for Gary Pelton, until recently an environmental resource specialist for the Corps at the North Hartland Dam. He’s battled Dewey’s Pond milfoil since 2004. Even though Pelton now lives in Maine, Nunez says, “he still wrote the [milfoil control] grant. He’s coming back this summer. He’s an unsung hero—he spends 12 hours a day pulling milfoil, but he’s no fuss, no drama. I administer; he does.”

Pelton says, “In the past, it was mostly me. I’d spend seven or eight weeks; I’d live in a tent. But this summer I’m trying to line up help—college and high school kids—and I would like to get more local help.” He explains that the pond is so shallow since Irene that vegetation grows better. Milfoil grows up to the surface and then spreads out sideways, shading out other plants. “It’s so thick fish won’t go into it. Aquatic animals and insects that eat vegetation won’t eat it. And when it dies down in the winter and rots, that uses up the oxygen in the water, so it makes a dead zone.”

In some ways, the shallow water seems to make weeding easier, since, as Nunez says, “you used to work on the bottom by grabbing a breath and ducking underwater, but now you can walk right out there.” But, as any gardener knows, a heavy crop of weeds is very hard to deal with, and milfoil can start a new plant from broken bits not collected. So, it’s probably impossible to eradicate, but “we want to get the population as low as possible,” says Pelton. “Fifty percent [of the pond infested] is bad; ten percent, it’s possible to keep after.” Getting out with a group to work on the milfoil can be a party. The vegetation that’s removed can be composted or tilled into gardens to add humus—anything to keep it away from bodies of water!

Nunez and others concerned to revive Dewey’s Pond held a couple of open meetings in the fall and winter to gather interested people and provide information. Getting the necessary permissions and funding is clearly going to be a difficult process, however. At this point in time, we have not been able to get the Corp to come to the table,” says Tad, and nothing can be done to repair the pond without their agreement. “My job,” says Nunez, “is to say ‘What’s the consensus?’” But he clearly has opinions about what should happen: “If it fills up with milfoil it’ll be worse than those 1967 hospital green hallways.”

Want to lend a hand? Contact Tad Nunez at Hartford Parks and Rec (tnunez@hartford-vt.org). Visit the Save Dewey’s Mill Pond page on Facebook.