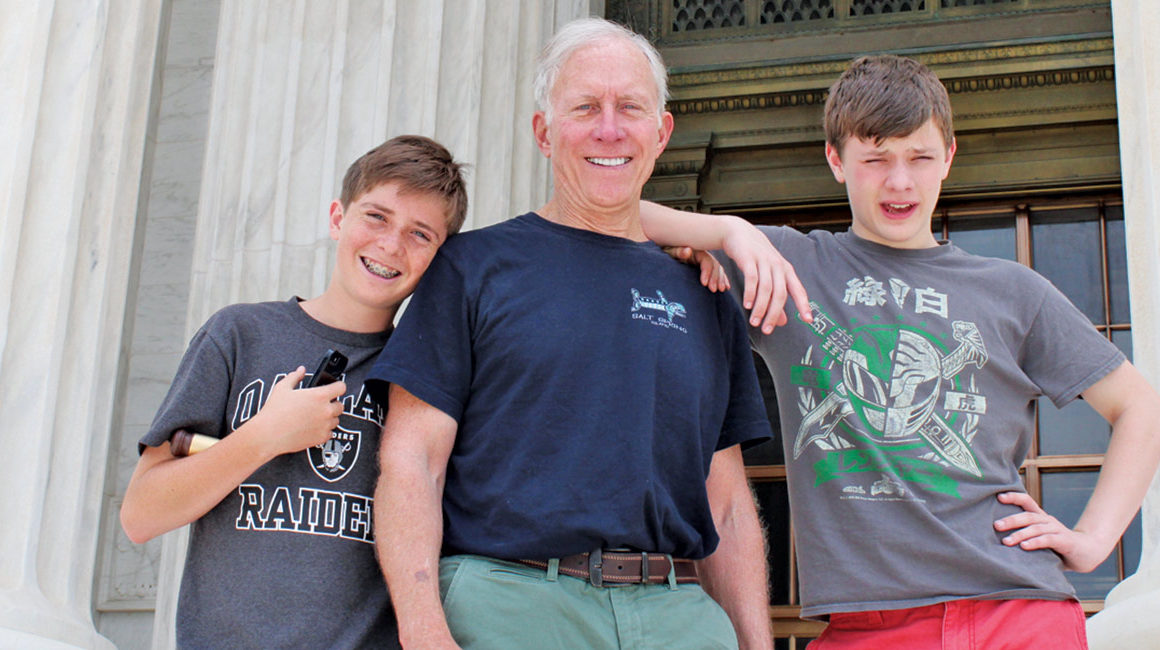 As a Quechee Lakes Landowners’ Association (QLLA) Trustee since 2015, Norman Watts’ impression of the state of QLLA governance is important. His response to my inquiry about it was, “I am very confident that the ship is being sailed well. The skipper is competent and very concerned about the members. It’s a good crew.” This statement is quite an apt analogy from someone who has also been an avid sailor most of his life.

Norman’s initial impression of Quechee Lakes when he moved here in 2000 was not always as positive. One of the reasons why he ran for the trustee position was to “encourage and support the momentum QLLA had demonstrated over the past five to six years, so we don’t drift into a stall like when we first relocated to Quechee Lakes. When we arrived here things like the clubhouse and health club were dated and tired. It has dramatically changed – to the credit of the members’ support of the upgrades. My involvement with the QLLA Board and committees has given me a whole different perspective on the Quechee Lakes Landowners’ Association,” he says. 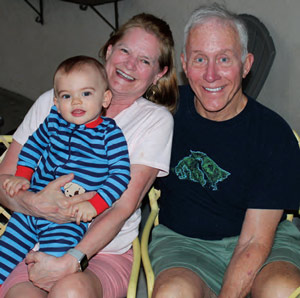 Norman and Katherine with one-year-old Brady

Norman has lived in Vermont since 1982. He grew up in Southern California, moved east to attend American University in Washington, DC, decided to embark on a law career and came to Vermont Law School.  He and wife, Katherine, have lived in Woodstock, Barnard, and Hartland, Vermont. They decided to make the move to Quechee Lakes for several reasons. First, Katherine (Dow) grew up in Quechee, and the move was a move home for her. And, they knew they would love living in Quechee Lakes, and they do, “because of the wonderful friends we have here, the super facilities and the natural setting – removed from a crowded urban setting, but close enough to socialize with friends,” Norman says.

During his years in Washington, DC, Norman was active in politics. He worked on Capitol Hill for the House of Representatives Education and Labor Committee and learned first-hand the importance of fair labor laws and standards. He managed Ronald Reagan’s gubernatorial re-election campaign and President Gerald Ford’s election bid. “Working at the White House was an amazing experience, but I prefer living and working in the Upper Valley – with its quietude and sanity. It has changed my outlook.”  His law firm, located in Woodstock, serves clients throughout Vermont in state and federal courts and has done so for more than 30 years. Watts Law Firm specializes in civil litigation – predominately employment law and medical malpractice.

Amidst his political involvement, Norman managed a ski mountain resort development project in Colorado and a mountain residential development in Northern California. His connection with land development work was a natural focus for Watts on helping to manage the landowners’ associations’.

With his legal education, came an increased awareness of environmental issues, as well as a strong interest in workplace discrimination, particularly of women. Norman says the “glass ceiling is even in Vermont.”  He fights hard for the rights of women in the workplace, and this work represents close to 90 percent of his practice. Coming to and living in Vermont has also changed his outlook politically. Given his background and career focus, QLLA is lucky to have him actively involved in governance and community relations.

Involvement in QLLA committees and the Board of Trustees

Before his service on the Board of Trustees, Norman was a member of the QLLA House Committee for seven years, an experience that led him to “appreciate the importance of communication and cooperation between members and management.” During his time on the Committee, major physical plant improvements were achieved including the clubhouse renovation and reconstruction of the swimming pools. “With a diverse membership on the Committee we were able to work with management to accomplish a great deal,” he says. Another reason he ran for a trustee position was to expand his House Committee experience to “have a greater impact on long-range decisions.”

Watts is now chair of the Community Affairs Committee. With his respect for “public sentiment and its nuances” as a result of his years in the political world, his ties to the Upper Valley community, and concerns about community relationships, he is a natural to chair this Committee and is proud to hold this position. He has worked to improve the rapport with the Town of Hartford and thinks that it is going well. He attributes much of this change from the members and Trustees moving away from a “private club/member only” focus to being strong community members. “It’s great to see the Quechee Club as the home base for the Hartford High School golf team and to see local youngsters skiing here. We have a duty to participate in the wellbeing of our community. I see our relationship with the community – local, regional, and state – as extremely important to the success of QLLA,” he says.

The Community Affairs Committee continues to promote the Life’s Transitions/Aging in Community programs that have been evolving over the past several years (see related article on page 25). The Committee will continue to support the evolution of the Ottauquechee Music Festival as well as planning for QLLA’s 50th anniversary in 2020. They are working with the Town of Hartford to complete the Covered Bridge Pocket Park – at the time that this is being written, the park on the west side is under construction, trees are planted, stairs are going, and it looks good.

In October, the Community Affairs Committee hosted three Vermont legislators for a briefing on the status of milfoil infestation in Lake Pinneo. State Senators Alison Clarkson, Dick McCormick, and Alice Nitka, learned about the problem and toured the lake area. QLLA leadership and members are concerned about preserving Lake Pinneo as a recreational facility and nature preserve.  Norman was impressed with our Vermont Senators, “They were on top of it, interested, and personable. They asked a lot of questions and had done their homework. Ken Lallier, QLLA property manager, has recommended an aggressive, but safe treatment to eradicate the milfoil, one that will work for all concerned parties,” says Norman. The Committee will continue to monitor progress and report to QLLA members about the status. Watch the QLLA blogs on this topic; there is one on the website now from Norman entitled “Lake Pinneo Infestation Solution.” 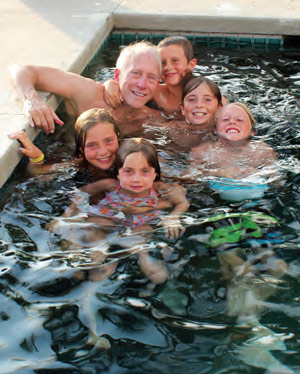 Norman with five of his grandchildren at Kona, Hawaii

At the beginning of this article, I mentioned that Norman is an avid sailor as is Katherine. They have sailed the Caribbean, the Pacific, and Atlantic oceans as well as the Mediterranean Sea together, including a great Atlantic trip from St. Thomas, Virgin Islands, to Bermuda and Newport, Rhode Island. But things change! The sailing came to a “screeching halt; now it is our grandchildren take up our free time,” says Norman. They have a blended family of five children and have eight grandchildren, from under one to 16, who live in California, Pennsylvania, and Colorado. So now their travels take them to those locations. Of course, the grandchildren also love to visit Quechee. The couple occasionally still sail, enjoy cross-country skiing and snowshoeing here in the winter, and are both jazz music enthusiasts. But their greatest joys now are those children and grandchildren.