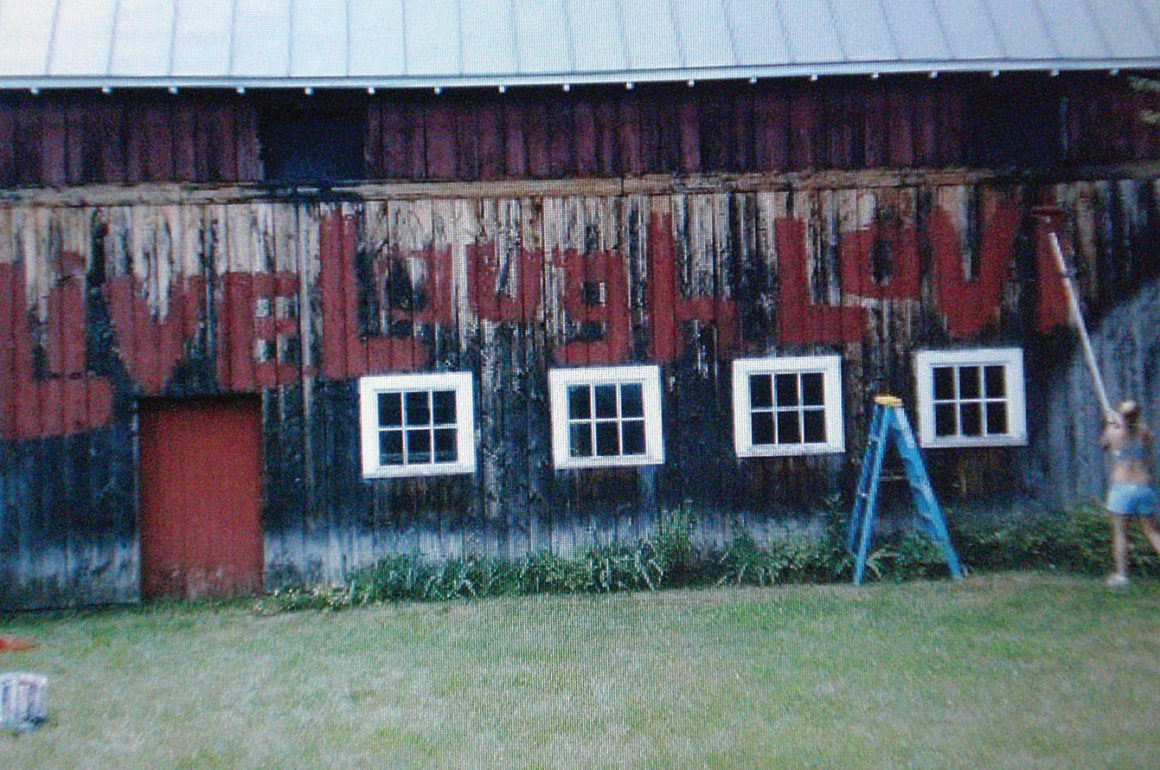 The old Maxham place is Vermont-speak for ‘the farm formerly owned by the Maxham family.’ The farm now owned by Tim Shine and his family has a new name – River Highlands Farm – as well as a unique name for their barn. Tim and his daughter Molly explain why.

Traffic whips right along on Quechee Main Street between the Quechee Club and the Taftsville Bridge. But, at about halfway, there’s a landmark that does more than its share to slow people down. An old farmhouse sits right next to a large barn and a red milk house. It’s the barn that people are looking for. They come to admire the exhortation painted on the side in large, cheerful letters: Live, Laugh, Love. 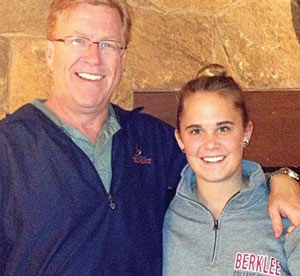 The Shine family had lived in their first place in Quechee, Dartmouth Place, for almost ten years when they bought the farm property on Main Street in 2006. They fixed up the late-1800s farmhouse, taking the building down to its bones, and refinishing it as a comfortable, light-filled dwelling with a delicate sense of historical style. They also created an addition with a kitchen and a great room.

Tim was working out back on the barn one day, giving the raw barn boards a protective coat of red paint. Molly, then 14, was hanging with her friend Maddy Lyden. “She was supposed to be helping,” recalls Tim with a forgiving laugh. The girls asked if they could paint the long side of the barn facing the road, and Tim said, “Have fun,” figuring he’d paint it over later.

But Molly had something special in mind. “I like the phrase, the idea. It didn’t really come from anywhere in particular,” she says. “I’ve always been accused of being impulsive,” she adds with a smile. “We did it with paint rollers. We didn’t measure. We thought it looked good.” They’re right about that: People driving by often stop to admire their work and take pictures. Couples getting married at the Quechee Club or other local wedding venues pose here before their wedding. “I really appreciate it when people ask,” Tim says. “Some people come knock on the door and ask. Others are oblivious to the rest of the world.” Aside from noting these differences in human behavior and degrees of politeness, Tim makes no distinctions… all comers get to take their pictures. And far from painting over his daughter’s work, he cleans off the motto’s background each year with a pressure washer.

“It’s kind of cool,” says Molly. “Something we did on the spur of the moment became a ‘thing.’” Now a merchandising assistant with the TJX Companies, Molly wears a necklace with, as she explains, “the exact coordinates of the lifeguard stand at Lake Pinneo. I have the best memories of being up there. A bunch of families had kids just a few years apart [in age]. We could ride our bikes everywhere.” A nostalgic smile lights her face.

The barn appears in many images on the internet. The Shines have a painting over the fireplace that they commissioned from a woman from Kansas City whom they met by chance in Woodstock. The barn was the subject of a chalk drawing in Woodstock’s street fair, an ephemeral manifestation of the motto’s solid advice: Live, Laugh, Love.

« Previous post
Bringing the Magic of Books to Ottauquechee Students
Next post »
The Emersons: Committed to Quechee