Racism in America: My Learning Journey 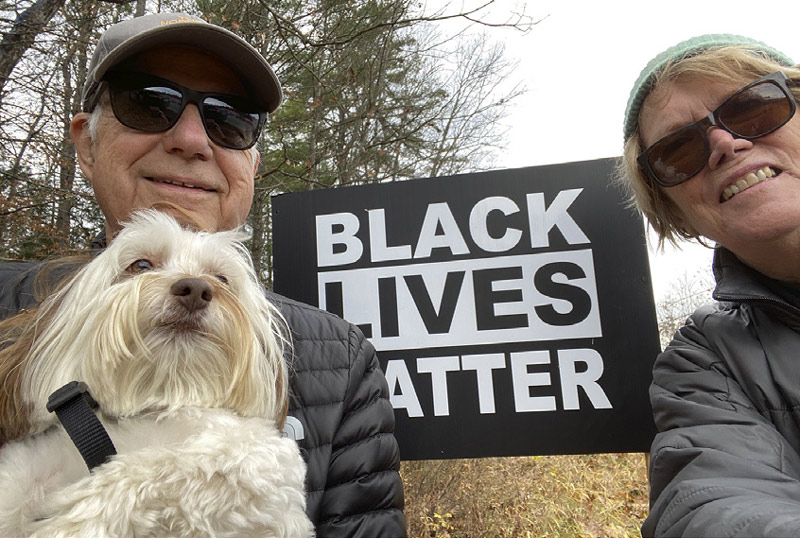 “I am not sure she should get a driver’s license. If she is stopped by the police, her chance of racial profiling is high in Vermont.”

“When the kids go to school, I am worried when the teacher asks them a question and if they are slow to answer, the teacher is more apt to interpret it as insubordination more so than if they were white.”

“I just saw a pickup truck with a Confederate flag flying on it in your neighborhood. Is it safe for the children to walk to your house?”

Such are the worries posed by my daughter because she is the mother of two children who are black and living in Vermont.

I became interested in racism and black life in America when my daughter and her wife adopted their first black child 14 years ago. In preparation, the adoption agency recommended an interracial family learning program. A presentation by Dr. Jaiya John, the first black child adopted by white parents in the United States, woke me up to what our own family path might look like when he said, “Black men are the most feared of anything in America. We start out as Teddy bears and as we grow, we turn into grizzly bears in the minds of white people.”

How could I, a white woman living in Phoenix, Arizona, prepare to become a grandmother in an interracial family? Then, a seemingly random article in our local newspaper listed books one could read to learn about racism. Booker T. Washington’s Up from Slavery was the top suggestion. “Ah, a place to begin, I thought”! I recommended it to my book club of all white women and my journey was under way.

I later relocated to Quechee and as a now full-time Vermonter, I stumbled along for the next few years, denying that we experienced racism in our family, not recognizing racial situations we were in, and even not understanding my own racism. I continued reading on racism and picked up a bit of knowledge here and there. But I needed to learn more.

Then, seven years ago, an OSHER class, Difficult Conversations About Race, led by Ellen Bettmann, caught my attention. I signed up and it lived up to its title. For the first time, I experienced a safe place to have a difficult conversation about race. For me much of the discussion centered around being an interracial family and learning to identify racial statements, situations, and behaviors, including my own. Along with conversation, we spent time studying the history of racism in America. Bettmann emphasized reading. My reading included The Atlantic, June 2014, Ta-Nehisi Coates article “The Case for Reparations,” Richard Rothstein’s The Color of Law, A Forgotten History of How Our Government Segregated America, and Ibram X Kendi’s Stamped from the Beginning: The Definitive History of Racist Ideas in America. From reading these important works, I came to understand the roles federal, state, and local governments played in establishing laws to create and sustain racism, since the beginning of slavery in 1619 to present day.

In 2020, a racial incident occurred at the Quechee Club, shocking most in our community. Concerned club members and Quechee Club leadership decided to use the incident as an opportunity to address racism and diversity in our club community. A consulting firm, Groundswell, was hired by the club to provide professional development workshops, which led to the formation of the Quechee Club’s Diversity, Equity, and Inclusion Program (DE&I) and an active DE&I Council comprised of twenty-one members.

The Groundswell workshops introduced Ibram X. Kendi’s book How to be an Antiracist, who suggests we are all racists, many unaware of it, and asserts the opposite of being a racist is being antiracist: that is, a person who sees racism and acts against it. I saw Black Lives Matter signs in other Vermont towns and Kendi’s argument for action motivated me to arrange signs that were visible in Quechee. I was delighted when four landowners agreed to have signs placed on their property. I am not sure what I expected, but what occurred caused me to feel fear, followed by anger, then sadness. At one location, the signs frequently disappeared, even as I replaced them several times. In another location, the signs were vandalized. So, I put up more signs.

Today, I am a member of the DE&I Council comprised of three committees: Education and Awareness; Policy and Culture; and Community Engagement. Many initiatives are underway, but the one closest to my heart is the educational program now being offered for club members and staff titled, Necessary Conversations About Racism, led by Ellen Bettmann.

Before my journey began, I did not know the history of slavery and racism in America. I think most of us do not. But without knowing the history, it’s impossible to grasp why racism persists in our neighborhood, in our state, and in our country today.

When I hear people say, “We don’t have a racism problem here at the club, or for that matter in Vermont, do we?” My answer is, “Yes, we do.” I am reminded of it each time I hear worries expressed by my daughter or see the vandalized Black Lives Matter sign in my garage.

But I am also heartened by the willingness of community residents to open their hearts and minds to the possibilities of joining me on their own learning journey on racism in America, right here in Quechee.

Myrna LaFleur Brooks is a member of the Quechee Club and serves as the Chair of the Education & Awareness committee for the Diversity, Equity, and Inclusion Council.

“Diversity is inviting someone to the party; Equity is them having space on the floor; Inclusion is inviting them to dance; Belonging is them choosing the music.”
– Allison Manswell, Path Forward Consulting
Share:

« Previous post
Fly Fishing in Quechee: The Legacy of the Vermont Fly Fishing School
Next post »
The Ottauquechee Health Foundation Shares Their Warmth