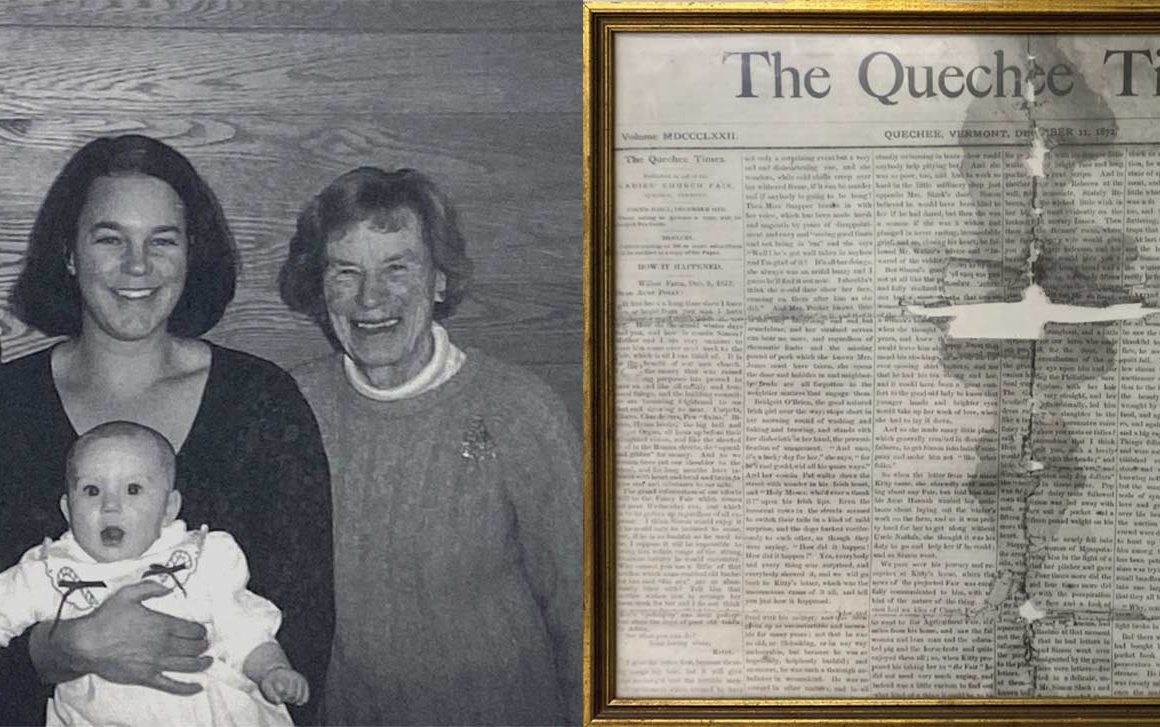 Actually, the Quechee Times’ first edition was published 150 years ago in 1872. However, the ‘modern-day’ version began in November 1972. Please indulge me as I tell this full-circle tale.

L. John Davidson was the founding visionary of the Quechee Lakes development. He was on a quest to find the perfect setting to create a four season resort community where families could live, work and play in the beauty that only Mother Nature can provide, while still having access and relative proximity to high-level cultural amenities and city centers. Quechee was just that spot.

While it sounds nice in the movies, it’s not a given that ‘if you build it, they will come.’ Especially in the early 1970s, pre-internet era, reaching people to let them know about your creation involved print media (and/or radio and TV) and the US Mail.

Enter the Quechee Times. When John Davidson happened upon a tattered copy of the Quechee Times from 1872 in the basement of what is now the Parker House, it sparked an idea. Why not recreate an old-fashioned-looking local paper that published stories about all of the wonderful people, places and events happening in and around this special new community called Quechee Lakes? Without making a hard sell, the Quechee Times ‘sold’ Quechee organically by just exposing potential prospects to a lifestyle that could be theirs in this northern paradise.

So, in November of 1972, the Quechee Lakes Corporation published its first edition of this ingenious marketing piece that looked and functioned like a local newspaper. Fifty years later, this quarterly publication continues to publish the stories of all of the good people, good places and good things happening in and around this amazing community (Quechee and Quechee Lakes, combined).

The full-circle part is how I came to be the publisher.

At some point in the late 1970s, Ginnie and Tom Lane retired from their newspaper jobs and moved to Quechee to enjoy the active lifestyle they found here. They bought the Quechee Times from the corporation (Quechee Lakes) and would publish it as a retirement hobby. In less than a year of being here, Tom Lane suddenly died of a heart attack. They had been in the middle of putting the Holiday issue together.

With help from Dave Barrell (next section), the Holiday issue went out and the paper continued on its quarterly publishing cycle with Ginnie at the helm. When Ginnie turned 83, she realized that her hearing wasn’t what it used to be and was having trouble getting “the facts straight,” so she decided to put the paper on the market to sell. As my mother, Carol Dewey Davidson, was in real estate in Quechee, she heard through the grapevine that the Quechee Times was for sale. I had just had my first child and was having a hard time relinquishing her to day care all day when she was just 6-weeks old to accommodate my 9-5 job’s hours. Since I had produced newsletters and written for local papers, I felt qualified to see about buying this business so I could have the flexible schedule I needed to be able to care for my child and work at the same time. Ginnie was willing to finance the purchase price for me over time, and in November of 1995, I became the publisher of the Quechee Times!

What makes this a full-circle story is that John Davidson was my step-father. Who would have guessed that 23 years after he had the idea of launching a local paper as a marketing vehicle, his now former step-daughter would become its new publisher!

Since 1995, while raising my two daughters, now 27 and 23, I have been intentionally publishing good-news-only content that celebrates all that is good and inspiring in a community. With five publications now under the Greater Good Media name, I am proud to claim the Quechee Times as my foundational model and hope to spread good news in other communities across the country!

If you have stories to tell or believe that your community would benefit by having a Quechee Times-like publication celebrating its good news, please contact me at publisher@greatergoodmedia.net.

Thank you for your 50-year loyalty and continued support in keeping local print media alive and thriving!

In 1976, I answered an advertisement for a secretarial position at the Quechee Lakes Corporation in Quechee, Vermont. The interview was with the vice president of sales and marketing in The Mill (now Simon Pearce’s restaurant and glassblowing business), which was corporate headquarters. Within a week, I was an employee.

Evidently I did not read the job description thoroughly. In addition to all the duties associated with working in sales and marketing of a rapidly growing business whose doors were open seven days a week, 365 days a year, I had acquired the editing duties of the corporate ‘newspaper,’ the Quechee Times. The paper was of particular interest to my boss as he had an affinity for writing, photography and news.

So, with camera, notebook, and pencil in hand, I began to explore Quechee. The paper was published monthly at the time, so I had the time to search out long-time residents for chats at the kitchen table, business-focused meetings, sales reports, spotlights on new employees, and photos of everything from the first shovel of dirt turned over for a new condominium site to skiers on the Quechee ski hill to scenic views of Quechee Gorge – all in black and white!

The Times was my introduction to the Quechee community; although a corporate marketing tool, for the Village and for me, it was an open door to the world at our doorsteps. And, in a small way, I hope those early editions of the Times helped to pave the way for community acceptance, understanding, and belief in the Quechee Lakes of today.

Help Is On the Way

I recall stopping by the big red barn to visit with Charlie Jameson – “Did you hear that Tom Lane died?” he greeted me. “Wow, Ginnie will need help putting the Quechee Times together,” I replied. That was it. I contacted Ginnie shortly thereafter and offered my assistance, which she readily accepted. I had studied journalism at Michigan State University and was the night sports editor with experience in editing and putting together a publication. We got together at her home at the top of the ski hill, which served as the production facility. If one has never been part of putting out a publication, pre-computer, it requires a lot of cutting to fit stories into prescribed spaces and editing, often with scissors, and subsequently writing and pasting in a headline. Fun, but challenging and frustrating when things just don’t or won’t fit.

It all came together, and Ginnie became quite the publisher. I went back to my financial advisory business and occasionally wrote or helped out as needed.

What this vignette shows is what a small and caring community Quechee was 40 years ago. Regularly, I would sit and chat with Charlie, John Davidson and a few others, and we would know all the comings and goings in Quechee, good and bad. And of course, we had our opinions and were not bashful in expressing them. The Quechee Club was much more intimate and, nightly, an assemblage would be imbibing at the bar or at someone’s home. People, such as Bill Kelly, would pop-in whenever they pleased, sometimes already with a drink in hand from another party.

There were not many young families living in Quechee as compared to the present. The pool complex consisted of the indoor pool and a single outdoor pool. One day, Chris and Laura Barrett, along with my then-wife, Carole, and I were sitting by the pool with 2-year-old Molly Barrett and Justin Barrell. We observed that the pool was inadequate for young kids. Chris was treasurer of QLLA and I was head of the Tennis Committee, so we had some influence with the Board of Trustees. We proposed a new “kiddie pool” and the granddaughter of the president was visiting that weekend and had complained about the same issue. Within weeks, a new pool was dug at a cost of $13,000 and it lasted for many years until the great water complex was completed. It’s remarkable what a handful of dedicated individuals were able to accomplish 40 some years ago.

Quechee has evolved and John Davidson’s vision has been mostly fulfilled, and today we enjoy living in one of the most special 5,000 acres of beauty in the US.