November 22, 2020by Virginia DeanNo CommentsAll, Good For You 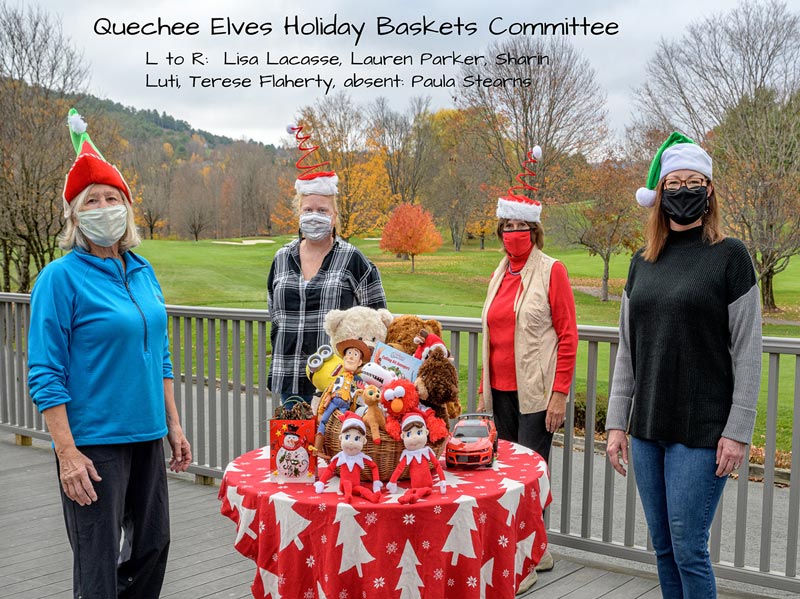 Tis the season, and no one knows this better than the Upper Valley non-profits that are now gearing up to help adults and children in need. Ten years ago, for example, Quechee resident Lisa Lacasse started the Quechee Elves program to benefit the Hartford-Norwich Holiday Basket (HNHBP) program that began in 1983. Through their efforts, children are sponsored and supplied with clothing and toys to make their holiday a bit more special.

“I grew up in Hanover and was a volunteer with the program for many years,” said Lacasse. “In fact, we started a year or two after the HNHBP began. I invited several of my friends and their children to sponsor a family. Our children would use their allowance money to purchase some of the children’s gifts.”

Shopping Elves do the shopping and Donation Elves prefer to donate money. At the beginning of November, Quechee members sign up for a child or children to purchase specific gifts that the family has asked for. The average spent on a child is approximately $130. Donations are made out to QLLA Charities with a memo that it is for The Holiday Baskets. “The key to this program is the people – I feel privileged to work with such compassionate and fun people,” said Lacasse. “It’s been an honor to run this program with so many Quechee Lakes members lending support and helping hands.”

Part of Quechee’s charm is the array of volunteer activities in which members can become involved. QLLA Charities, Inc. is the service arm of QLLA, for example, and sponsors several other charitable functions besides the Elves each year to help support the extended community. It has been fundraising for 35 years, according to volunteer Sharin Luti. “Most, but not all, of the dollars have gone to programs and/or bricks and mortar to benefit CHaD (Children’s Hospital at Dartmouth-Hitchcock),” Luti said. “Some of the other beneficiaries have included Holiday Baskets, WISE, The Haven, Quechee Cares (pandemic support), and Hurricane Irene aid.”

CHaD is the recipient of two large fundraising events held at Quechee. One is the CHaD Classic Golf Tournament held in June and the other is an accompanying Gala in July. The QLLA Charities donates to CHaD as a result of these successful events, and volunteers begin early in the spring to plan for, and work on, both of these events.

QLLA Charities has donated over $2.5 million through funds raised from the CHaD Classic Golf Tournament and the CHaD Gala. “This year, we were unable to run these events and did a virtual fundraiser which netted $30,000 for CHaD,” said Luti.

In addition to organizations that go through QLLA Charities, there are also volunteer efforts put forth by members including the Community Affairs Committee whose members make masks, repair hospital gowns for Dartmouth Hitchcock Memorial Hospital, and make quilts for those who need them.

Another volunteer organization is The Haven that, since 1980, has provided temporary shelter and educational programming for homeless families and adults as well as food to anyone in need. Its mission is to serve people struggling with poverty by providing food, shelter, education, service coordination and other support.

Quechee Cares is a new fundraising endeavor from The Quechee Club community. They raised over $27,000 during May 2020. Donations were given to the Haven to fund the Food Shelf and other programs. In addition, Quechee Cares paid Quechee Pizza Chef and The Public House Pub to provide “thank-you meals” at Dartmouth Hitchcock Medical Hospital and to supply meals to those in need through the Haven.

Over the years, Quechee Club members have volunteered at local hospitals, Quechee Library, the Haven, local schools, the Vermont Institute of Natural Science, Headrest, David’s House, Friends of Veterans, Listen, WISE, and the Garden Club, to name a few.