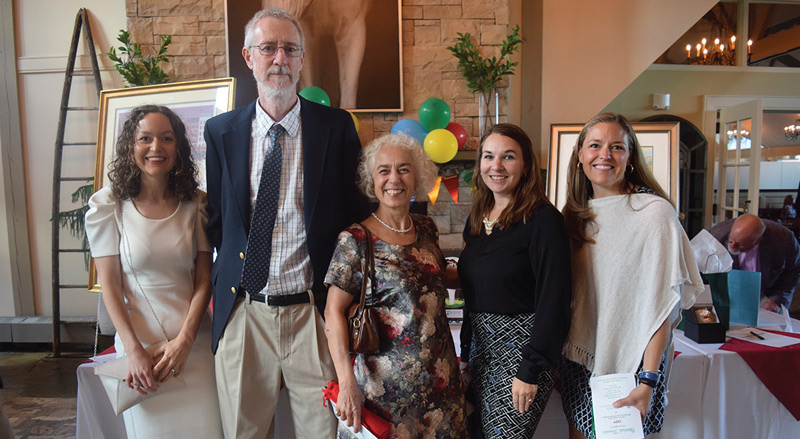 When local resident Cindy Gould retired four years ago, she reflected on ways she could use her time and professional experience as a volunteer. So, in 2019, Cindy reached out to Gail Ferney, president of the Quechee Lakes Landowners Association (QLLA) Charities, Inc. to see how she could help. It wasn’t long before Cindy became deeply and passionately involved in the organization, specifically its CHaD Gala.

“Since I’ve considered myself to be a sort of jack-of-all-trades in the development world during my working years, I thought it would be a good fit, and it has,” she said.

For the Gala, Cindy maintains its prize database by keeping track of donations; getting the word out through various social media platforms and through the Quechee Club’s website and publications; and creating such print materials as signage, the invitation package, and the program booklet.

Cindy is one of well over a dozen dedicated volunteers at QLLA Charities, established as a non-profit in 1980 and formed with the vision of making a positive and significant impact in the Upper Valley community. Host of the notable CHaD Classic golf tournament and annual CHaD Gala, QLLA Charities has raised millions of dollars for the Children’s Hospital at Dartmouth Hitchcock (now Dartmouth Health Children’s) as well as for other local causes such as the Quechee Elves holiday season initiative for families in need.

“The mission of QLLA Charities is one that the Quechee member community is proud of,” said Brian Kelley, CCM, PGA, general manager and chief operating officer of the Quechee Club. “Everyone here treasures this very special place, and the member-led QLLA Charities committee is dedicated to uplifting our Quechee community through their work. The inspiring part is that they achieve this while supporting the greater Upper Valley area at the same time.”

The annual CHaD Gala is organized and hosted by a large committee of QLLA members with the support of the QLLA board of trustees, the Quechee Club, and its dedicated membership. Since its founding, QLLA Charities has donated $2.87 million to assist the dedicated staff at CHaD by providing medical care to the sick and injured children in the immediate region. There are 18 people on its committee.

“I have seen firsthand the wonderful work done by the dedicated CHaD Gala from its beginning in 2003 and realized how important community support is to the welfare of our children,” said Sharin Luti, Gala chair. “I have led a fortunate life and believe that it’s important to give back. This is one of my ways of doing that.”

This year, the Gala was a “big success”, according to Sharin. “We had 174 people attend and all seemed to have a really good time,” she explained. “We gave a check to CHaD for $120,000. This is the combined profits from both the Classic and the Gala. Our musicians, Erik Boedtker and Johnny Obdrazalek, were great.  People danced well beyond our usual 10:00 pm closing time.”

As chair, Sharin has put together a large group of volunteers who, as she noted, are “dedicated, talented, and very responsible. Our committee is made up of teams that work well together to get the job done,” she said. “I coordinate the teams and work on several as well.”

Sharin said she was particularly excited about this year’s Gala because – as reservations were coming in – there was an increasing number of new and younger QLLA members which, she noted, will have a positive impact on the future Galas, resulting in more children being helped.

Over the last 20 years, there have been several, diverse themes of the Gala that are displayed on the wall of the lobby at the Quechee Club each year.

“Seeing this, people ask more about this organization and often donate in order to get their name on this growing display,” said Jeanette Veverka, Decorations and Wall of Hope leader. “This year, I have seen kids tweak the nose of the clown and ask if they could add their name to one of the balloons. That donation means another child will be helped through CHaD’s Gala. Over the years and working with my team on the Wall of Hope has truly been a joyful experience, knowing that whatever donation given is helping CHaD achieve success.”

This year’s theme is The Circus with the tagline “Step Right Up for the Kids” and included – in addition to the live music and silent auction – a live auction and game of Heads or Tails hosted by ChaD Gala returnee Jaime Polli, a speech by Dr. Resmiye Oral (section chief, Child Advocacy and Protection Program; and professor of pediatrics, Geisel School of Medicine, Dartmouth), and a plated dinner. All proceeds benefit The Ken and Vickie French Child Advocacy and Protection Program (CAPP) at CHaD.

Like the majority of Gala volunteers, Cindy related that it has been “incredibly satisfying” to work alongside a group of dedicated volunteers for such a great cause. “Seeing it all come together as a result of many, many individual contributions is just as satisfying – and very special,” she added. “And it couldn’t happen without lots of hands on deck.”

« Previous post
Giving Quechee the Opportunity to “Speak their Truth” in a Safe Environment
Next post »
VINS: 50 Years of Connecting