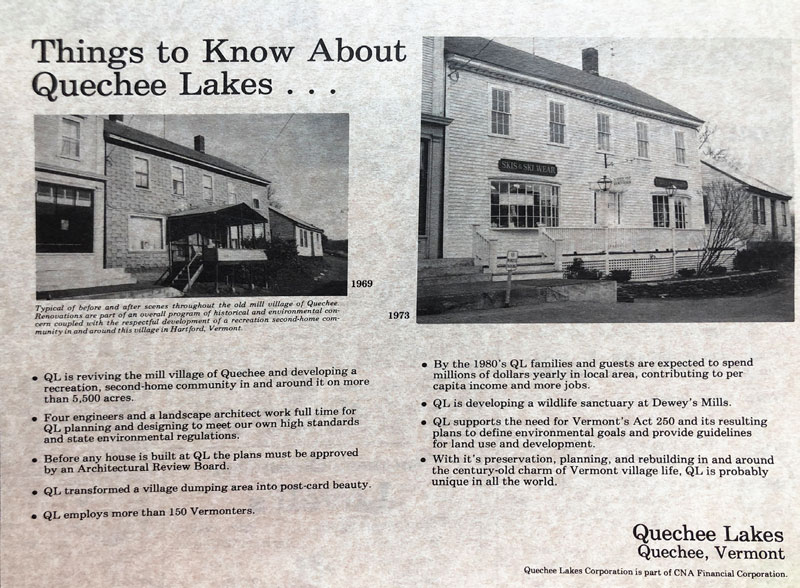 My first glimpse, and it was a quick drive through Quechee in 1973, on a rather gloomy day in early April. I was on a business trip and was intrigued with the name of the village displayed on a country store at the blinking yellow light. So, I drove down the hill, through the covered bridge, turned left on to Main Street. As I had grown up in a very small village in northeastern Vermont, the bedraggled look of many buildings did not disturb me as they were evident in many rural villages. However, a couple of the buildings stood out as extensive renovations were in progress and workmen were on site. Traveling up the street, I turned right at a ‘newish’ bank building and started driving, but quickly came to a stop – the street/road ended. In front of me was a huge pile of rocks, dirt and fallen trees. Indeed, it was a road, but to where? That was my introduction to Quechee – a dead end road.

In 1976, I returned to the village and it has been my home ever since.

The village name, Quechee, comes from the Natick Indian tribe’s river name, Ottauquechee, meaning swift mountain stream. There have been many iterations of the name; however, in 1908, the National Geographic Name Division made it official. This river has been the current which brought the village to life and which has sustained it well over two hundred years. The end products of the river’s water power were all about the necessities of life – lumber, fabrics, brick, grain, cider. Today, the end products have changed but the river still remains the focus of much of what Quechee is all about.

Now that the origin of the name ‘Quechee’ is settled, let’s explore the ‘road to where’ and see where it takes us. Farming and textile manufacturing became the backbone of the economic base for Quechee. In the 1800s, Quechee was known as the ‘industrial hub’ of the Town of Hartford. The amazing major engineering feat of the day was the building of the railroad bridge over Quechee Gorge to accommodate the Woodstock Railroad run from White River Junction and return. The rail lines brought summer visitors and advanced year-round economy with the ability to transport goods to White River Junction where rail connections were made to faraway markets.

As we know, time moves on and by the mid-1900s, the labor force in the Quechee area became more and more difficult to procure. The mills moved south, farms grew smaller and the young men and women decided farming and mill work were not for them so they moved to greener pastures. Abandoned buildings, weeds, broken windows, were all signs of a dying, deserted mill town not unlike many throughout New England.

But the rolling hills, meadows, and water were abundant. The peaceful valley flooded with early morning sunlight and settled down as evening shadows crept along the hillsides.

Not too far away, trucks rolled up the Interstate from Boston to Burlington carrying goods night and day; visitors flocked to Quehee Gorge. Economic prospects brightened the entire region; especially White River Junction, but Quechee, once the industrial hub of the Town, sat in quiet suspension.

L. John Davidson and a group of like-minded historians and developers came upon Quechee in the late 1960s with one thought in mind – to build a four-season resort community. The developed acres would be the first large development to be built under the newly legislated Act 250, Vermont’s environmental law. Davidson and company’s objective was to create a restoration rather than a development. Home sites would be clustered to allow for open views; one-half the holdings would be common land; a review board would pass on every structure and building designs would be carefully scrutinized to blend into the countryside. There would be golf courses, a clubhouse, an indoor pool, tennis courts, a ski hill, and, and, and.

For all of this to happen, Davidson had to start making contacts – a skeptic at first, Selectboad Chair and Legislator, Joe Reed, began to hear good things about Davidson and Quechee Lakes. Tom Bourne, organizer of the Ottauquechee Planning and Development Commission, was intrigued because of his interest in area economic development; Quechee residents’ opinions ranged widely – some thought that Davidson and his colleague, Holly Paige, must be Rockefeller agents (Laurence Rockefeller lived in nearby Woodstock and was instrumental in making the town a visitor’s paradise) or they were from the Mafia or even the Federal Government to buy up their land!

In actuality, none of the speculations were correct. Davidson, Paige and their company were acting only on behalf of themselves.

Selectman Reed led many lively meetings making the statement that Quechee Lakes was a tremendous opportunity to broaden the tax base of Hartford. The Town’s Listers did not agree. The developers bought some properties on which there were empty houses but the key to the village restoration was the purchase of the Fogg property of over 300 acres above the village’s Main Street. In about two years, Quechee Lakes owned 6,000 acres in the ‘bowl’ around the river, more than one-quarter of the entire Town of Hartford. The Listers were not happy.

After acquiring the backing of the one of the largest insurance holding companies in America (CNA Financial), the developers project was now secure. Davidson moved his family to Quechee and started the restoration of many homes and businesses in the village. Marshland Farm (now the Quechee Inn at Marshland Farm) was the first large home on the list; followed by mill owner J. C. Parker’s colonial mansion (now the Parker House) which became the first offices of the Quechee Lakes Corporation. Vestiges of Davidson, Paige and company renovations and rebuilding can be seen up and down Main Street including the Mill, home of Simon Pearce; the covered bridge that was rebuilt and dedicated in 1970 by Vermont’s Governor Dean C. David; and the ski hill, the Tennis Club, the Clubhouse, and, and, and.

So, now that we have discovered the origin of the name ‘Quechee’ – delved into its early history, its industrial heydays, its decline and rebirth – the reader will realize that the name is more than just a word on a page. It is a story.

And, where does the road lead? Based on Quechee’s story, the road may never be finished but will continue to offer new directions. Whether the reader is a ‘born and bred resident,’ a new home buyer, a visitor, a neighbor, a friend, or a stranger, I will leave you with one of John Davidson’s many observations of this valley: “This is – and can remain – the most beautiful valley in the country. It sounds corny. But if people can’t preserve traditional values within the context of the modern world and modern people, what will we have left?”

By the way, that road that ended on my trip in 1973? You can take it all the way to the top of the hill. Pull over to the side of the road at sunrise, and you will see what John Davidson was talking about.