Promoting the Quechee Life to Others: Lynn Luczkowski 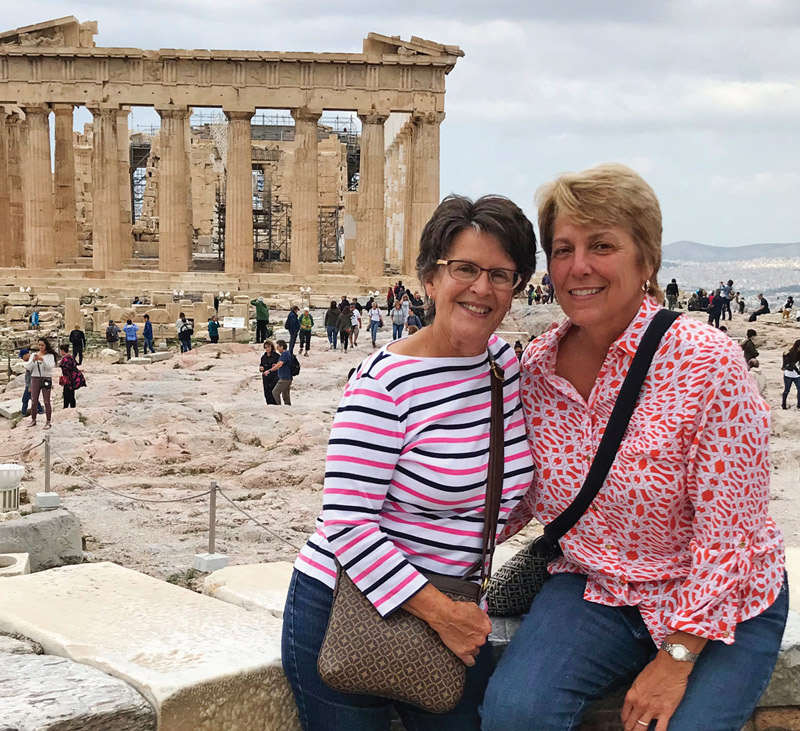 Lynn Luczkowski and I recently sat down to talk about her new role as a member of the Quechee Lakes Landowners’ Association (QLLA) Board of Trustees on a beautiful Quechee morning. She mentioned how one of our long-time members asked her, “How are things going with your new responsibilities?” Her answer, “Things are great, but I thought living here year-round and being an actively involved member gave me a decent perspective of the operations. Now I’m beginning to really understand what is involved in making QLLA’s operation tick.”

Lynn shared how the new Trustees recently had a “behind the scenes tour, via a whirlwind golf car ride” of the Quechee campus. “For QLLA to run as smoothly as it does it requires real collaboration from our full- and part-time staff plus tremendous support from the many members who volunteer,” she says. “It was eye-opening to see the inventory and necessary equipment needed to keep everything running smoothly and beautifully manicured.”

The campus tour also gave her a newfound appreciation for the amazing job Ken Lallier, the Quechee Club’s property manager and his crew does. “It was interesting to get a snapshot of the back-end operations,” she recalls. “I was pleased to see the environmental consideration being made on a host of things, in particular with irrigation and the recycling of water.”

Bringing her experience in communications, marketing and public relations to QLLA 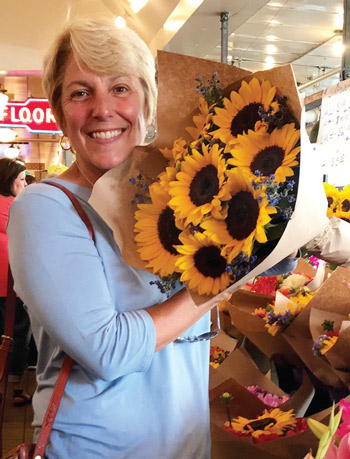 An all-around athlete who enjoys many sports and recreational activities, Lynn received a Communications degree from Rutgers University. She earned a four-year scholarship as a softball pitcher for the Division 1 Lady Knights and competed in two Collegiate World Series. After graduating, Lynn landed her first job in academia at Manhattanville College in Purchase, New York, where she publicized the college’s 14 teams and its student-athletes. Four years later in the 1980s she headed north to Dartmouth College in Hanover.

“Dartmouth was my first glimpse of the Upper Valley and Quechee, and I thought wow this is a truly beautiful place to be. To this day I don’t tire of the natural beauty we are surrounded by,” she says.

Among her many job responsibilities at Dartmouth, she wrote stories and photographed the athletic teams. Through the lens of her camera, she captured student-athletes – from a shell at early dawn on the Connecticut River with the crew teams to the sidelines and end zones on Saturday’s with Big Green Football.

After four years in Hanover, Lynn took a position at a sports marketing agency in Connecticut, the state where she was born and raised. With her colleagues she helped build marketing programs for brands including IBM, Warner-Lambert, and STATS, Inc., which took her to many major league ballparks and allowed her to work alongside some of the game’s greatest ballplayers like Derek Jeter, Brooks Robinson, Cal Ripken, Goose Gossage, and Rollie Fingers, to name a few.

Always looking to branch out, she expanded beyond sports to join an advertising and public relations agency in New Haven, CT, where she managed a variety of accounts including Verizon Wireless’ Northeast region. She expanded the company’s business, which led to opening a Boston office on Newbury Street and worked her way up to vice president of Public Relations – all while earning her MBA.

When a corporate position presented itself at Spalding Sports Worldwide in the early 2000s, Lynn thought it would be an ideal opportunity to round out her portfolio of experience. She led the public relations efforts there and was responsible for the golf and sporting goods business portfolios. When the company was eventually sold to Callaway, who purchased the golf assets and Russell Athletics, who acquired the sporting goods portfolio, Lynn helped formulate the communications. When presented an opportunity to relocate to the West Coast (Callaway’s Carlsbad Headquarters), she felt her experiences and Rolodex were robust enough to start her own business in a region she was most familiar and comfortable in, New England.

Branching out on her own 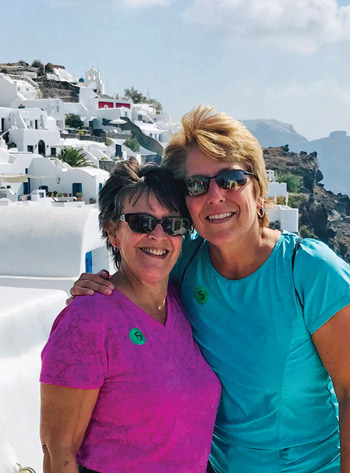 In 2005, she started L2 Communications in West Hartford, CT, with Spalding signing on as her first client. In the 13 years, she noted some plum assignments; one came within six months when she was asked to represent a real estate developer who purchased the St. Andrews Grand Hotel in Scotland.

“That project was memorable because it was held during the week of the [British] Open Championship in the storied backdrop of St. Andrews,” she says. “To see Tom Watson and Jack Nicklaus walk across the Swilcan Bridge at what was Jack’s last Open Championship was special,” Lynn recalls.

Today Lynn along with her wife, Donna LaFleur, has established a work-life balance in Quechee. The couple, who struck up a friendship 30 years ago when Lynn first moved to the Upper Valley, has lived in Quechee full-time for four years after Donna retired from Yale New Haven Hospital in New Haven, CT. For 15 years they commuted on weekends between homes in West Hartford, CT, during the week and Quechee on weekends, and for holiday getaways. They agreed they wanted to settle on one community and one home and it was Quechee, and they have never looked back.

“We represent a lot of families who have gravitated to Quechee on weekends and for getaways or vacations,” says Lynn. “The more time you spend here you realize it’s a great community with much to do year-round, and eventually many settle here.”

Both are equally involved in community activities serving on local boards and volunteering for a number of organizations. Lynn is a board member of the Hartford Area Chamber of Commerce and a mentor who has volunteered with SCORE in Lebanon, advising entrepreneurs and small business owners.

For Donna, Quechee was home before Lynn relocated here. Donna raised her son, Kevin, 38, who attended school locally before joining the United States Marine Corps and obtaining degrees from American University. He now resides in Las Vegas but frequently visits his mom and LOM, referred to as “Lynn Other Mom.”

Prior to her board position, Lynn served on QLLA’s ad hoc Marketing Committee and has also been an active member of Quechee’s Women’s Golf League and the Quechee Garden Club. She is now the board liaison to the Fitness Committee. Lynn recently got hooked on paddle tennis and along with Donna, enjoys many of the Club’s amenities from regular fitness classes to cross-country skiing, and hiking the trails with their 11-year-old yellow lab, Gloria.

“Going to the gym in the morning is like a scene from Cheers, everyone knows your name, and it’s a spirited fun group. Our gym friends energize us as much as a good workout.”

While on the Marketing Committee, Lynn was instrumental in gathering a group of golf and travel media to Quechee and Woodstock in return for media coverage. Some writers had never been to Quechee while others were very familiar with the Lakeland and Highland golf courses. “In the golf industry, Quechee has a phenomenal reputation. It is one of the real gems of New England, and we should be proud of that,” she says.

Another marketing project she helped guide was visually showcasing Quechee. Lynn recommended a friend and colleague, Jay Stearns, to direct and produce videos that capture Quechee in its beauty year-round.

“For those who have never visited or heard of Quechee, we had to bring Quechee to them,” she says. “We have natural beauty and unbelievable amenities here. Our golf courses, ski hill, trails, and new aquatics offerings, and dining options were easy subject matters. The videos, showcased on the website and through social media, were produced over the course of the year, and they shine the light on the seasonal changes and what makes this place we call home so special. It has helped in the Club’s branding and drawn new visitors, members, and families to us.”

As a board trustee, Lynn shared optimism in her early observations. “QLLA is a well-managed, fiscally sound organization and the leadership is focused on addressing the needs of the ever-changing demographics of the Club. Keeping the members happy and thriving is important, but we also need to make sure our employees thrive and enjoy their time here as well. I think most agree we are focused on making the Quechee experience the best it can be for those who work, live, and play here. But we should also embrace the outlying community as well.”

Like most that live in and love Quechee, Lynn and Donna attend many Upper Valley cultural activities, venturing to regular performances at Northern Stage, Shaker Bridge Theatre, and the Hopkins Center. And when it’s time to get away for a day or more, they have found many familiar options.

“We love Burlington and enjoy Stowe and Trapp Family Lodge for cross-country skiing and hiking,” she shares. “In the summer when we have the need for a sniff of salt air, Ogunquit [Maine] is our “go-to” for beach time and lobster. We’re very lucky to be located where we are, and if there’s one real challenge living here in Quechee, it’s finding time to fit work into life with so many fun and stimulating things to do!”