He did it without a hitch. Paul Luti in his 72nd year conquered his own golf challenge of “71 at 71,” and surpassed that goal by playing 91 holes in one day on the Quechee’s Lakeland and Highland courses. His effort had an added benefit for his favorite charity CHAD (The Children’s Hospital at Dartmouth-Hitchcock). “It was the easiest effort to raise an amazing $12,442,” he says. Luti used Facebook, and emails to friends and family, word-of-mouth to communicate his mission and offer some interesting ways to donate. Pledges based on holes played, number of birdies, pars and sandies were some of the choices.

On the Monday after Father’s Day, June 22—and according to Luti the perfect weather conditions for such an event partly cloudy, 70 degrees and no wind—Luti and his volunteer support team, in the form of golf buddy, Fred Martin, set out early in ”the oldest cart in Quechee,” as Luti describes the cart he owns. An array of balloons attached to the cart signaled its progression on the courses. Ranger Lee acted as the front man, clearing the way for uninterrupted golf. “Ranger Lee was amazing. As far as I know, no one minded our playing through,” the grateful Luti says.

With Martin “in the pit,” Luti just had to swing, and swing he did for ten hours and 15 minutes—that’s five rounds of golf plus one hole. Sounds preposterous? Luti attributes a number of factors to his successful completion.

First Martin fixed all the divots. And there were many, as Luti, AKA the “Dozer” is known for his deep divots four to six inches Martin confirmed. Martin also raked sand, tended the flag removal and replacement, supplied water and kept score and statistics.

Next, Luti cut down on his practice swings by 50 percent and found that it didn’t negatively influence his game. Also, he figured, playing golf on average six times a week with moderate pre-game driving range practice, plus mega work on his home gardens was enough physical preparation for the odyssey he envisioned. Not only was it enough, he just kept going after reaching hole number 71 to complete 91 holes in all. Martin loyally came through on his promise and commitment to 71 holes and then signed off. Quechee Golf Head Pro, Steve Rogers was there to greet Luti on the 71st hole. His wife, Sharin, joined him for the next 20 holes.

Luti readily admits that Martin worked much harder than he. Martin, who shares his time between Quechee and Tucson, Arizona, is a regular player with Luti and both play golf in the Quechee Men’s League. He describes Luti as a big strong guy, passionate about CHAD and Quechee. “I saw he could use the help,” Martin said about volunteering to join his chum.

Stats for the day:

If 71 holes was the goal, why continue on to 91 holes? Luti had a chance to up his donations by increasing the number of holes he played. He felt good and pumped and decided to push on through 20 more holes and raise more funds.

With the amount of work he sees his wife, Sharin, Gail Ferney and many others, putting into raising funds for CHAD through an annual Quechee Club sponsored golf tournament, and auction and themed dinner, which raises $100K plus each year, Luti was amazed at how he was able to raise over $12,000 by himself. Luti has a new idea for a 2016 Golf Challenge with 18 golfers, each starting simultaneously, on one of 18 holes, on the same course, on one Monday in June of 2016. Each golfer would do his or her fundraising for the charity of their choice. The Quechee Club, at this date, has not sanctioned this event, yet Luti remains hopeful.

Luti’s passion for golfing and gardening

Luti, who bought a home in Quechee in 1977, resumed his love for golf 18 years ago, after his two children were sufficiently launched. He had taken an 18-year break to be more of a “family man” when his children were born. Once retired from a long career as an engineer and manager at Raytheon in Massachusetts and living fulltime these last 12 years in Quechee, golf became his occupation. He also volunteers his time to a number of efforts and on committees for the Quechee Lakes Landowners Association. “I love Quechee,”says Luti, “and the staff, especially our manager is phenomenal.”

Luti’s other passion is gardening. He is a first generation Italian-American born in the North End of Boston, Massachusetts. His parents always had a garden, chickens, rabbits and a strong work ethic. “And I just can’t help it.” He’s disappointed with his tomatoes this year and will have to supplement by buying enough fresh, local tomatoes to make his customary two to three gallons of tomato sauce to cover his pasta dinners over the winter. His perennial flower beds thrive, making the dreaded mowing of lawns a thing of the past. This coaxing of growth in a naturally wooded Quechee lot is just another challenge he embraces. 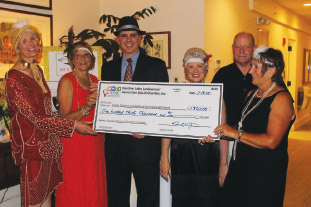 Paul Luti’s “Golf Marathon” proceeds were combined with the proceeds from the CHaD Classic Golf Tournament on June 15, and the “Roaring Twenties” Gala on July 18 to provide a record-breaking amount of money raised for CHaD. On the Saturday night of the Gala, QLLA Charities presented a check for $130,000 to CHaD, bringing their 31-year total to a whopping $2.13 million! The funds raised by these three events will help support the Child Advocacy and Protection Program (CAPP) and build on the endowment started ten years ago. CAPP helps some of the most vulnerable children in our region – those who are the victims of neglect or abuse.