Outdoor Play and Adventure at the Ottauquechee School 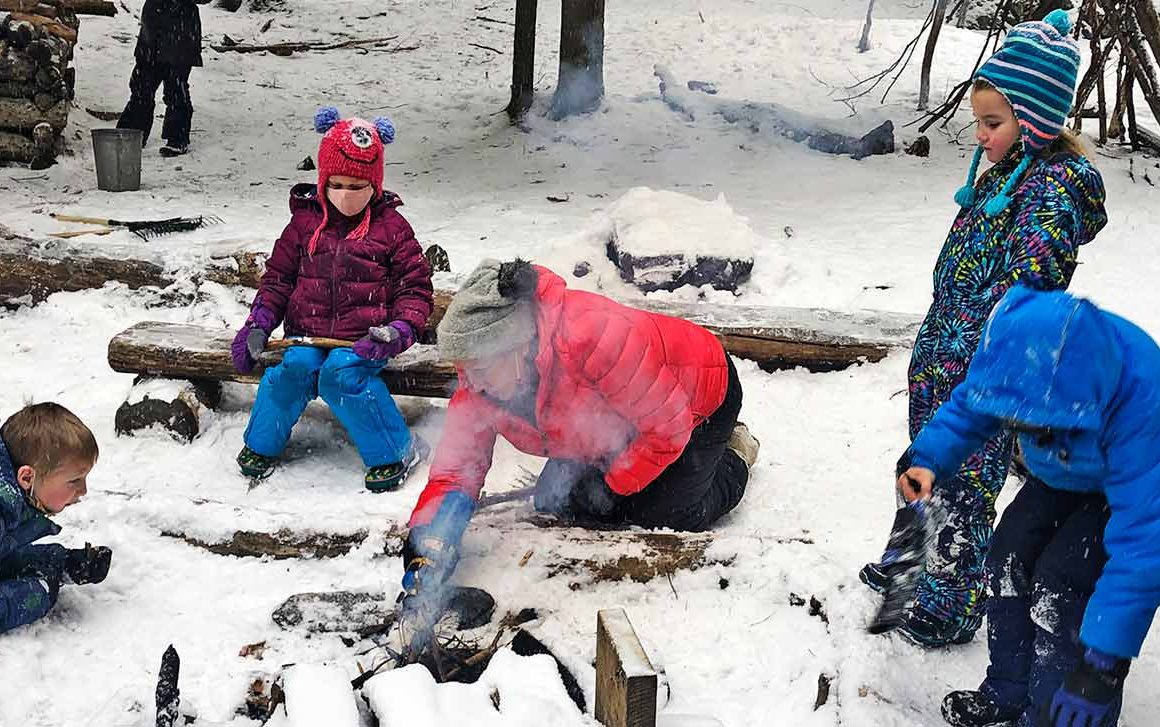 Through outdoor learning, students at the Ottauquechee School experience benefits such as, safe opportunities for student-directed play, learning through discovery, and connecting with new peers.

In the beginning of the pandemic, “all classes were spending as much time outdoors as possible for safety reasons and to allow for a mask break as learning continued, using outdoor spaces next to the school constructed by Paul Sadowski (garden organizer and longtime outdoor leader at Ottauquechee) and volunteers,” said first grade teacher Jodi Tierney.

More recently, however, most teachers have shifted back to learning outdoors mainly when it makes most sense for them and their students. They must also balance factors such as, meeting student needs in-person while providing work to those quarantined and being ready technologically for the entire class to go remote, according to principal Amelia Donahue and third grade teacher Staci McDougall.

The first-grade teachers decided to continue weekly first grade outdoor classrooms into the 2021- 2022 school year due to the benefits they observed these students getting out of outdoor learning. Aria Bergeron, a first-grade teacher who had previously led forest classrooms as a kindergarten teacher at Ottauquechee, provided initiative for this as well. The kindergarten classes have been doing a similar weekly forest classroom since 2013.

Students have opportunities for imaginative play outdoors, such as defining and creating their own spaces. When the Quechee Times visited, several first graders were busying themselves in a so-called “restaurant” formed by a circle of stump seats. “This venue had previously been used as a doctor’s office by students,” said Tierney. The first graders had previously written up menus and orders at the restaurant described above, practicing reading, and writing in the process.

Construction comes with the need for repair, too. In the kindergarten forest classroom, a group of kids were working together, “to repair everything in a makeshift stick building,” one said. The students were making a soup out of snow and pouring it all over the house as glue.

Some other first graders cooperated in an adventurous way when they used a rope attached to a short rocky slope to climb up the slope.

Students can create outdoor opportunities for games, too, including variations on ones they already know. One kindergartener, Scarlet, played Tic-Tac-Toe in the snow, creating a larger board too in case multiple people wanted to play.

“Kids have the opportunity outdoors to spend time exploring what they’re curious about,” said Morgan Fisk, another first grade teacher. Recently, for example, some first graders expressed curiosity about animal tracks, so teachers printed up animal track identification sheets that students could use.

In Sadowski’s opinion, “learning outdoors helps students remember what they learn and works best as a way of solidifying concepts.”

McDougall took students outside to reinforce a subtraction topic recently. She used a constant distance between two students on a physical number line to demonstrate how a problem such as 572 – 299 could be changed into one with a more rounded number, such 573 – 300, to solve it more easily.

Often students are inspired by curiosity and wonder at first-hand observations. Fourth graders on a hike on the Section Five trails “were floored by the fact that the stone walls still existed,” including one that used to be a farmer’s backyard, “but the land was no longer open farmland,” said Gigi Stone, a fourth-grade teacher who leads a yearly field trip to these Quechee trails.

Different students can flourish in the outdoor setting. Alisha Keel, the school counselor, who helps lead the Wolves on the Prowl outing club for fourth and fifth graders, said that the program started as a way for students to be active outdoors who did not normally play sports or get out in the woods. Now, however, many students who play sports have joined as well. Staci McDougall also mentioned how, “some students who may not excel at indoor academics can learn especially well in nature.”

In Wolves on the Prowl, students gain outdoor experience and spend time with peers while learning a variety of specific outdoor skills such as using a med kit and safety whistle. Tavi and Violet said they learned how to use their whistle to call for help if they got split up from the group, and how to deal with a bear encounter: to yell “bear!” and back slowly away from the animal.

“First grade students in forest classrooms this winter have more often attempted to resolve conflicts amongst each other on their own before consulting teachers than they would indoors,” said first grade teacher Fisk. Students were encouraged in this direction by posters teachers had made available, providing them with problem-solving ideas.

Focusing on natural sights and sounds can also help students calm themselves and recenter. Some young children who go outside with the school’s mental health clinician will sit down and say, “Can you hear the birds? Whenever I’m outside at my house and I need to calm down, I just listen for the birds,” according to Principal Donahue.

The kindergarten and first grade forest classrooms help develop this healthy awareness of one’s surroundings through “sit spot” and “statue” activities, among both first grade teachers’ favorite parts of the outdoor classroom. They briefly sit and listen, observe, and/or – in the case of sit spots – perhaps quietly play with snow and sticks in their immediate environment.

There are endless highlights and upcoming opportunities that the Ottauquechee students see in their outdoor programs. Fourth grader Ryland found joy in singing carols with the group while hiking down Mount Tom recently. Fifth grader Stephen enjoyed a recent scavenger hunt for deer antlers, pinecones, and teacher words of wisdom. Déja is excited to learn to cross-country ski. Whether in the woods behind their school or farther afield, these students are eager to find fun and adventure.