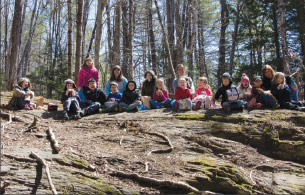 It sounds like we’re standing in a typical kindergarten classroom waiting for the kids to line up after snack or play time. Except we’re not in a classroom. I’ve been led by school principal Cathy Newton five minutes up and down some mud-seasoned trails behind the Ottauquechee school. Here, the kids aren’t just distracted with each other or shelves full of toys: some are watching teacher Meg Teachout pour water on the last remnants of the fire that cooked the pancakes earlier, while some are still stacking “wood cookies” (thin pieces of sawed off logs). Two girls carry a long branch, one on either end, with their snow pants and lunch bags hanging from the middle of the stick “we’re the caboose” they tell me while waiting patiently for the line of classmates to form.

Welcome to an outdoor classroom 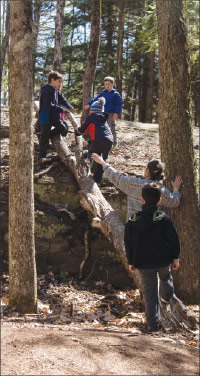 As far as the outdoor classroom goes there is a small three-sided, topless wood structure standing nearby for firewood storage next to a big fire pit which has a circle of log seating around it. A larger log structure with a hillside serving as the back wall stands a little further off with a tarp for a roof. A lot of the kids have left their jackets and mittens in there on this unseasonably warm day. A little before this area we passed a simple circle of logs cut flat for sitting. The “sit spot” is where I’m told the day outside really begins with each student sitting in their own chosen space to focus on the environment around them: Has it changed since you were here last week? Why do you think the moss is greener this week? Did you hear anything new? Science and math lessons come from a daily temperature check, measuring the water in the stream through the year and making graphs and charts from the data. A forest alphabet book is under construction and each child journals weekly about their time in the woods.

As Newton introduced me to the trail we were joined by Eliza Minnucci who walked with us while a bright-eyed toddler in a baby backpack bounced above her shoulders. Minnucci is the closest thing to a founder for the Ottauquechee Kindergarten Forest and, while currently on family leave, remains close and active with the Forest Kindergarten. She is also kept busy fielding questions about the Forest Kindergarten from Hawaii to Michigan through the blog the students and teachers keep at ForestKinder.org and ThoreauThursdays.wordpress.com. “It’s pretty unique nationally, and we’re starting to see some more local schools start similar initiatives. Strafford and Hartland have programs where kids are getting outdoors one day a week.” Forest Kindergartens have been popular in Europe for decades and Minnucci’s statement is backed with the knowledge of the national attention the Ottauquechee program has received through National Public Radio.

A few of the American programs are based on spending some learning time outdoors, some are garden focused and others like the Ottauquechee Forest Kindergarten integrate the outdoor component and gardening. The kids go outside in most weather conditions and inclusiveness is taken seriously as every child is provided with whatever it takes to get them outside comfortably for the school day once a week. The school garden was just cleared and tilled a few weeks ago. Minnucci tells me the program was born through the KinderGuiding program she started at the Ottauquechee School in 2011. That program brought local retirees into the school to help with four outdoor-based activities a year, the final activity of the year being a kindergarten-sized hike on the Appalachian Trail.

Minnucci’s training in education spans the world from Spain to Mexico to above the Arctic Circle where she was an education coordinator, home visitor manager and preschool teacher employed by the Council of Athabascan Tribal Government in Fort Yukon, Alaska for several years. Her ties to the places she learned to teach, is evident in her inspiration and motivation. After the KinderGuiding program proved a success she spoke with Newton about getting the kids outdoors not just four times a year but once a week. Newton was convinced to try out the idea. Meg Teachout was hired to help and collaborate with Minnucci, the program was formalized, grants were written, requested and thankfully received.

The success of the Kindergarten Forest spawns other programs at Ottauquechee 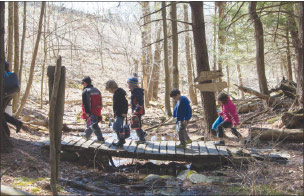 The Kindergarten Forest officially started in the fall of 2013. This year is a “turning point” for the program. Federal grants want to see sustainability; a new program should demonstrate self-sufficiency within a few years. Grant funders have included the Byrne Foundation, Mascoma and the Wellborn Ecology Fund. All the fire-cooked snacks are provided by a local foundation that provides only Vermont foods. The turn toward local funding is imperative in order to provide the few extra teachers needed with a group of kindergartners in the woods and each year presents a new challenge in this regard. The school recently set up a Go Fund Me account to help ensure the continuity of the program next year.

Rebecca Whitney is a local resident whose two young kids have gone through the Kindergarten Forest at the Ottauquechee School. “Both my son and daughter gained so many skills from being part of the outdoor classroom: confidence in problem solving as they worked things out in new ways, an appreciation for nature in every season, the ability to reflect quietly as well as work together with their classmates to achieve goals, and a sense of endurance as they trudged out every week, no matter what the weather!”

More programs are branching out of the Forest Kindergarten. Fourth and fifth graders can join the “Wolves on Parade” group that walks the forest after school hours to clean up the natural area surrounding the school. A bid was put into the local high school for the forestry class to come and fell trees that need to be taken down: something the kindergarten class learned about when a local professional came in to help identify potential hazards, marking them with the class to be watched and eventually taken down. The Upper Valley Waldorf School brings their pre-schoolers over to the outdoor classroom once a week. Minnucci, parents and the school hope to create perpetuity for the program, and a strong awareness of the program’s presence in the community through further connections with local residents and organizations. Students and teachers are happy and excited to come to school and now the only challenge that remains is to create total sustainability for the Forest Kindergarten from local communities and from within the school.