Nothing But Good Vibes All Around 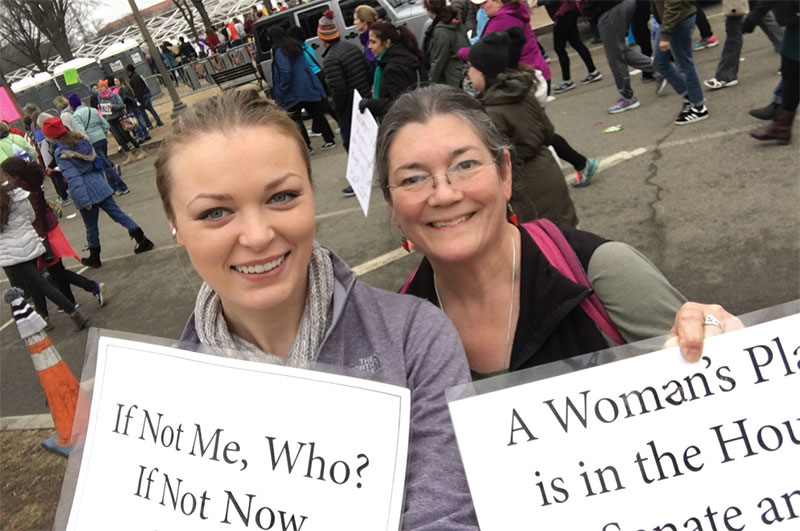 Politics aside, January’s Women’s Marches were incredibly inspiring to me and to hundreds of thousands of others across the world. It was truly a global initiative.

The scene in Boston was overwhelmingly surreal, as I am sure many in our community witnessed firsthand. January 21st wasn’t about negativity or one side versus another, but about the human spirit and our ability to unite as one people. While many are uncertain and apprehensive about the future, fear was cast aside and instead replaced with an energizing and positive feeling of hope. The marches were not merely about Trump, any political figure or initiative but about all of us. It was a manifestation of the best of the human spirit and our ability for unity in even the most uncertain of times. Everyone was in such high spirits, which only further proves that love is all there is. I spoke to strangers of all genders, ages, and backgrounds and heard their stories, which felt like a privilege. 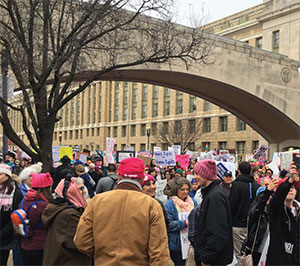 We’re all in it together and even though it may take a long time to practice kindness as our default, I am hopeful we can and will get there. Many in the Upper Valley had similar positive experiences, which is why we felt it was important to share these stories in a non-political, humanistic way. While the marches certainly did (and still do) evoke political views and strong emotions, the Quechee Times is never about politics. Instead, by focusing on the common denominator of human kindness that was clearly present at the events, we are maintaining our mission of inspiring positive community through our printed pages.

Although we were not able to include some of the QLLA members or Quechee residents in this piece (due to the print deadlines), we were able to share the stories of the mother-daughter QLLA Membership Services team, Hillary Sundell and Hannah.

Hillary Sundell on the Women’s March:

My daughter and I drove to Washington D.C. from NH for the Million Women March; we felt it important to be a voice for equality.

We find it difficult to speak honestly about the Women’s March without touching on some of the issues that the people who attended were trying to bring to the forefront. It was political; women’s rights issues are fundamentally political as well as social. The pins, signs, and chants that people shared during the demonstration focused on climate change awareness, misogyny, gun control, “Standing with Standing Rock,” equality for all (race, sexual orientation, gender, ethnicity etc.) and of course anything anti-Trump. It was an amalgam of messages, but the important takeaway from the day was the reestablishing of the peaceful protest back into society. 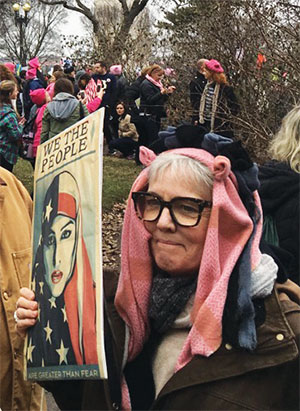 There were many reports regarding the millions who attended in the United States alone, but it was bigger than that, it was global. D.C. was a perfect depiction of the day; a million women, men, and children (including infants) were shoulder-to-shoulder, baby carriage-to-walker. For an event that so easily could have turned into a disaster, there was an overwhelming feeling of unity.  There was laughter and ideas shared, not a shred of hatred.

We were surrounded by people from all over; North Carolina, Georgia, California, Russia, France, and everywhere in between.

It is so easy for gatherings that big to result in arrests and worse, but it was as if, collectively, everyone silently decided that it was going to be a peaceful gathering. It was millions of people gathering to share ideas and, that in and of itself, is incredible.

Hannah Sundell on the Women’s March:

On a gray day in Washington D.C., a rainbow blanketed the streets. The political epicenter of the United States was flooded with every shade of activism.

There was fear in the days leading up to the march that there were too many conflicting messages, that it would be messy and therefore less effective. The march was for equal treatment (women, immigrant, Black, Mexican and LGBTQIA), climate change denial opposition, Black Lives Matter supporters and plenty of Anti-Trump protesters. Every sign, pin and chant represented a separate grievance or injustice, which ultimately did complicate the overall message of the march.

Was the march complicated? Yes. Was it less effective? No. The gathering in D.C, in cities scattered across the country and the world, was just that: a gathering.

The consistency of the march existed in the kindness of others. Numerous sources are reporting that no one was arrested and after the violence in Orlando, Syria, and various places this past year, peaceful protesting sends the most impactful message.

Everyone had an opinion and at times, the various voices had conflicting messages, but with the literal shoulder-to-shoulder masses of people there was nothing but good vibes shared.

My experience in D.C. on January 21st was a positive one. Despite the massive crowds, there was a sense of cohesion and a common desire for change, perhaps not everyone was focused on the same changes, but there was agreement on the importance of activism.

I was standing in front of a sleeping baby in a carriage when a woman to the left of me, in the huddle of people located on Independence Ave. and 12th St., collapsed. A few women in the area began yelling for a medic when a man emerged from within the crowd. The man told folks that he would take her over to the ambulance located about a block away. The woman was whisked to safety, her limbs dangling from the arms of a stranger. The sea of people, almost intuitively, parted to let them through.

While the march was not without controversy and a little disarray, it was peaceful. It showed the world that political activism is now alive and well, that there are people willing to express their freedom of speech and assembly in inconceivable numbers – without violence.

This article was compiled by Dewey MacMillen, a Northeastern University business school student. Dewey is doing one of three of her university-sanctioned internships with Village Green Publishing. She would like to continue sharing the positive experiences people had while at one of the Marches on other media. Please send in your stories (and photos!) from the March you attended. We would love to post them on our website between issues. Email us at publisher@villagegreenpublishing.com.