Maple Sugaring the Way It Used to Be 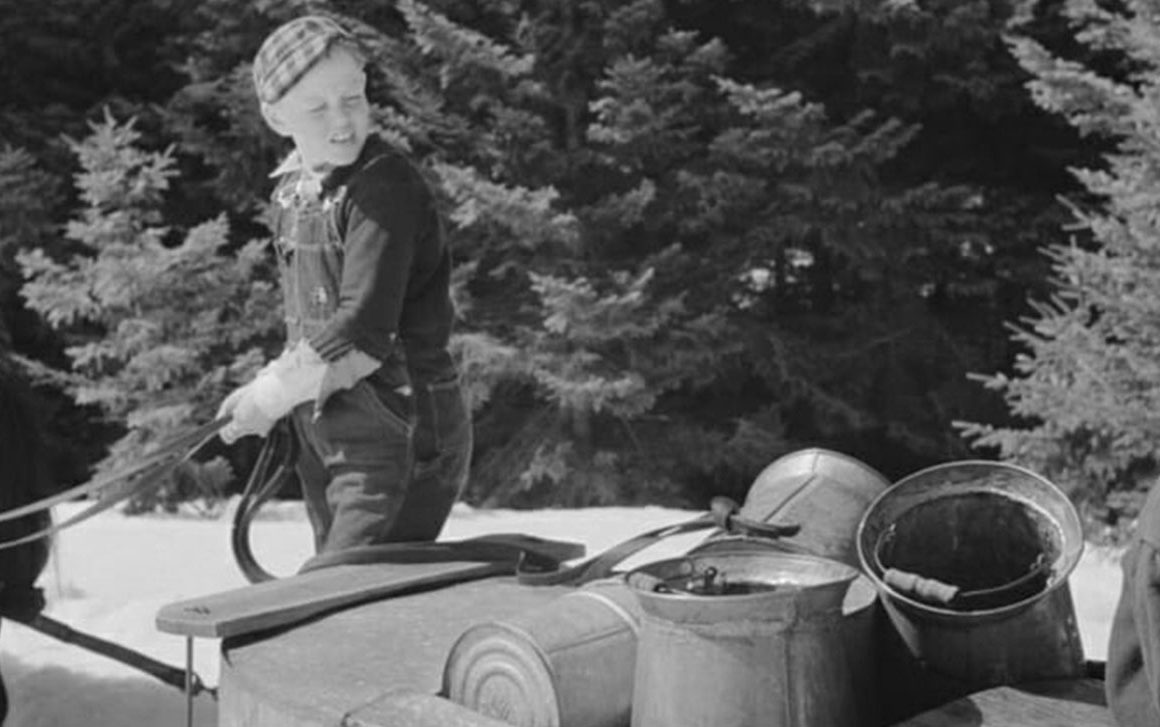 …and the Way It Still Is for Some 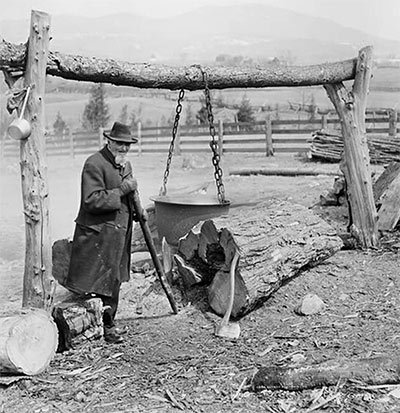 Boiling sap outside, circa 1906

There is a romantic feel for many today when talk turns to how farming once was. That feeling is accentuated by visiting places such as Billings Farm in Woodstock, where visitors learn about farms and farming techniques from years back. One aspect of New England farm lore of particular interest to many is the art of maple sugaring.

Today, most often in the early spring, Upper Valley residents and visitors have the opportunity to visit working maple sugaring operations and see how maple syrup and candy is made today. Many are also intrigued by the old fashioned methods of tapping trees and making syrup. Yet one does not necessarily have to go to a museum to learn about old-time sugaring techniques. Many sugaring operations, particularly small and hobby operations, still incorporate those techniques of the past.

Sugaring in the past

One of the basics of sugaring is tapping the sugar maple trees, and collecting the sap. Modern sugaring operations use a system of plastic tubing to collect sap, but in times past, taps and buckets provided the means of sap collection. Dale Lyman of Hartford, whose family has produced maple syrup in the Upper Valley for generations, began his sugaring career about 40 years back by drilling the trees with an auger, setting the tap in the hole, and hanging the metal bucket from the tap. When the sap buckets filled, they would be emptied into a larger vat for transport to the sugarhouse and re-hung on the tree for further collection.

Metal buckets and metal taps were the common tools used for decades. Before that, staved wooden buckets and wooden taps were used. As those would decay and break down over time, the metal taps and buckets were a welcome improvement for early sugarers.

Coopers, who made the staved buckets for sugaring in the 19th and early 20th centuries, also made large staved vats for storing the sap before boiling it down for syrup. Bill Stinson, who operates a western New England vegetable farm, has one of these large staved vats sitting next to his early New England sugarhouse. Measuring about three feet in diameter, and over ten feet long, Stinson estimates the early staved vat held about 300 gallons of sap, which was gravity fed from the vat to the evaporator for boiling down 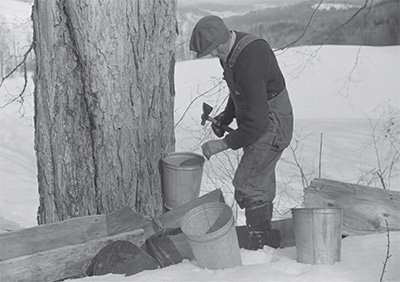 Stinson began sugaring in the late 1970s, using a local sugarhouse and equipment that had not been used for decades. The area sugar maples he tapped were the same ones used in previous decades, and the area still showed evidence of tracks from the oxen and wagons that once traveled through the sugar bush (the grove of maple sugar trees) to collect the sap from the buckets.

Jeff Luce, of Sugarbush Farm in Woodstock, also began his sugaring career in the 1970s, as a youngster. Much like Stinson, Luce and his family used the older methods of collecting sap at the time, before boiling it down to make the syrup and maple candy sold from the farm. “We didn’t use power tools, but used a bit and brace for tapping the trees,” says Luce. The sugarhouse they used at the time was an old one existing on the farm, which had sat dormant for many years.

Farm work never ends, it seems. Luce recalls that he and his father would head to the sugarhouse for the boiling down process after milking the cows, usually around 8pm. They then spent several hours in the sugarhouse. The old wooden sugarhouse was missing a door for a while, Luce says, and he recalls sitting on a bench while the evaporating process took place, feeling the cold night air and wind circulating through the structure. Having some structure for the boiling off process still beats the out-of-doors scenario.

Besides the hard work of trudging through the snow to tap the trees, collect the sap, and get it to the sugarhouse for the syrup production, Dale Lyman reminded me of another part of syrup making requiring hard, physical labor; the cutting, splitting, and stacking of the firewood used in the boiling off process. Lyman says before the modern, more efficient wood-burning heaters for the evaporation process came about, his family would use 40 to 50 cord for a sugaring season. For those of us who’ve cut, split, and stacked three or four cord for home heating, that amount of wood is impressive indeed.

Though there are no records to indicate it, one can imagine that with an old, wooden sugarhouse, filled with multiple cords of wood, and having an old style stove burning steadily throughout the sugaring season, a significant number of sugarhouses fell victim to fires over the years.

In the past, even If one did not have a sugarhouse, or their own sugar bush, it did not necessarily mean they could not make their own syrup and sugar products, says Bill Stinson. He says he has heard many stories from old-time sugarers about folks that would hike into an area containing a sugar bush, set up tents and an outdoor cauldron, and stay for a week or two tapping trees and boiling off sap for syrup.

Of course, syrup makers know that achieving the proper temperature of the evaporating sap is key to making quality syrup. Before efficient burners and sensitive thermometers, this was a bit more of a challenge. To keep sap from boiling over, which it is prone to do at too high a temperature, Stinson says old-time syrup makers might have added fat or bacon to the sap during the boiling off process. This was effective at the time, but likely would not sit well with today’s consumer, particularly if they are vegan or vegetarian. “For lunch, and as a way to pass time during the boiling off, they would also cook boiled eggs in the sap,” Stinson adds. 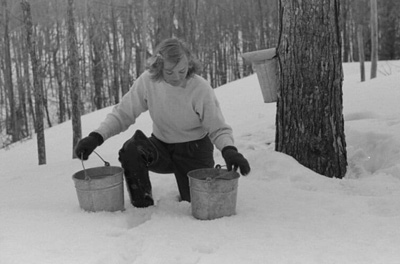 I asked Dale Lyman, who produces Lyman Family Maple Syrup on the family farm on Jericho Street, if he – despite the modern efficiencies in producing syrup – misses using some of the old methods of syrup making. “I do. If I had the time, I’d still hang buckets,” he says. I asked Jeff Luce if he has a warm, nostalgic feel for the old methods, or whether he says “good riddance,” to those. Laughing, “Definitely, it’s more the latter,” he says. No surprise Luce feels this way, as he finds today the farm produces 50 gallons of syrup in the same time period that produced seven gallons in the past.

« Previous post
Mush! Dog-sledding Through the Upper Valley
Next post »
Promoting the Quechee Life to Others: Lynn Luczkowski