February 15, 2016by adminQTNo CommentsAll, Get to Know Your Neighbor

I love an audience,” Eleonora Stein proclaims. Throughout her life she has found audiences, in her careers as dancer, singer and teacher. Now 89, she has lived a full and active life that’s provided her with many stories and collections of memorabilia—and she continues to accumulate anecdotes and events. “All the world,” even each local village street, is her stage.

“Mme. Stein,” as she is known to her ballet students, speaks with enthusiasm and precision—and presumably with accuracy—of her life and experiences. “I was born in Budapest on August 16, 1926,” she says. “This year I’ll be 90 years old! In 1938, I arrived with my mother on October 10 in New York. My mother’s father got the visa. We went through Berlin, and the train stopped in a huge Bahnhof—train station. They wouldn’t let us get off the train. The glass dome, the roof, was hung with gigantic swastikas from one end to the other.”

“My father and brother left the next year; they were sneaked out,” continues Mme. Stein. The family was Jewish—their name was Reich. She converted to Catholicism in the 1950s. “When we arrived, we lived with my grandfather on 72nd Street. My mother was excellent in needlework. She worked for an outstanding costumer in New York, and went to night school to learn English. I went directly to school—I didn’t like that! I learned English in three months and started writing for the school newspaper. And soon I was a well-known figure in school because of dance.”

All artistic endeavors appealed to the young Erika (Mme. Stein’s birth name). One day in a music class she noticed an empty front row and rushed up to claim it. When the class sang an aria from Faust, she gave it her all. “The teacher was listening,” she recalls, “ and said, ‘Erika, come up and sing it yourself,’ and the class applauded. Of course, all I needed was an audience,” she laughs.

Press photo from The Roxy Theatre.

The pretty child who had taken many dance classes in Budapest, and also performed there in children’s theater and short films, had disappointments as well as successes. In New York she attended the High School of Music and Art (which existed from 1936 to 1984), beginning in 1941, but her dance career ran into problems. Too early work in ballet on pointe in her early childhood had injured her feet, and doctors discovered she had a slight heart murmur, which in those days was treated with complete rest. “They gave me a pass to use the elevator—can you imagine!,” she exclaims. “It was such a heartbreaker.” Making lemonade out of lemons, she began taking voice lessons.

In the 1950s, Mme. Stein performed under the name Erica Bard (an Americanization of her grandmother’s name, Bardos) at The Roxy Theater, and toured with the company. At times she worked with her family: her father designed toys, including an angel Christmas-tree topper, which shows up in movies (including The Bishop’s Wife, and Holiday Inn). “I was the fastest on the assembly line,” she recalls. “I always had to shine. I’m a ham from way back.” In 1958, Stein became her name with her marriage to Hal Stein, who was her supervisor at a graphics company. The couple lived in New Jersey, where their two sons still live­—one a police sergeant and the other a corporate vice president. Mme. Stein is still in touch occasionally with Hal, though they divorced in the 1970s and he has remarried.

Around 1985 she moved to Woodstock. She has been known in this area as a teacher of dance, and she still has an occasional student. “The Russian style is what I teach. Arm movements are very important,” she says. “Like this, graceful!,” she demonstrates by moving her arms through several canonical positions with a smooth, lilting, continuous flow. “Not like this!,” as she moves her arms from down to up then to side and front in a stop-action style. 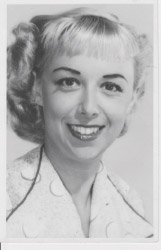 Press photo from her days as a singer.

Mme. Stein’s cozy apartment displays mementos of her activities over the years. Photos of herself and her family fill the walls, along with children’s drawings, paintings and sketches she has done, and works by friends. A treasured souvenir is a newspaper article telling of her visit to London’s Royal Ballet, signed by some of the company’s greats, including famous ballet dancers Margot Fonteyn and Rudolf Nureyev.

As she faces the challenges of age, Mme. Stein remains valiant. She can no longer drive, but she cuts a notable figure when she walks, wearing “my fur jacket, my beautiful fur boots, my fur hat, and of course my gold pocketbook.” As a visitor reaches to pick up a fallen item since Madame has difficulty with her knees, she exclaims, “No, no! I don’t want help. I do it myself.”

« Previous post
Ken Kramberg: Dedicated to Students in the Classroom and on the Quechee Ski Hil
Next post »
Hunter Hall Medals at Special Olympics