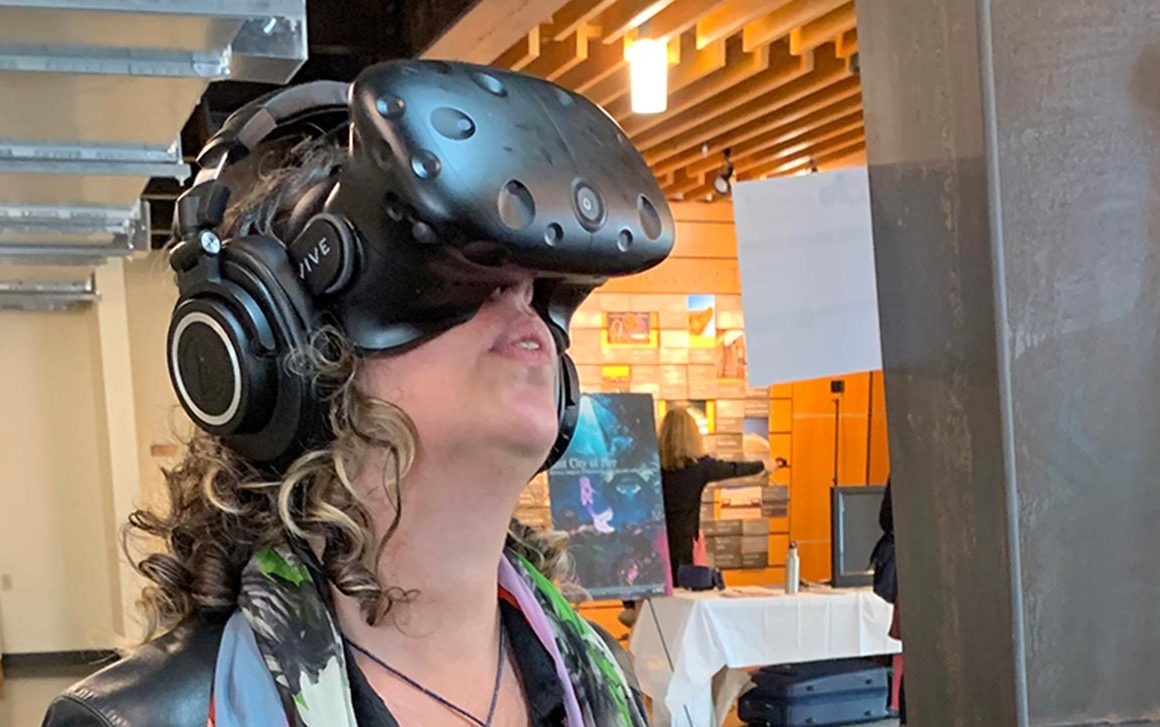 One fine day, audiences again will flock in person to entertainment venues around the Upper Valley, including the Quechee Green and downtown White River Junction.

Until then – we should live so long – Briggs Opera House and Hotel Coolidge owner David Briggs takes some comfort in the efforts of regional groups like White River Indie Films (WRIF) to keep the performing arts on our radar screens.

Take mid-December’s Light River Junction Festival of Cinema Light, during which WRIF defied the darkness of the 2020 winter solstice by screening short works by area filmmakers on the sides of downtown buildings for passers-by to see and hear.

“They’ve always had some innovative ideas,” Briggs says. “Their mission has been to provide meaningful content and a message, and this was a good way to make the best of the circumstances.”

While the gathering didn’t and couldn’t make up fiscally for canceling the White River Indie Film Festival at the opera house last May – or for clouding the picture for this spring’s event – on account of the coronavirus pandemic, this festival served multiple ends: to energize WRIF members and supporters, and to remind the public that there’s more than one way to engage with this and other arts.

“We really wanted to bring people physically back together, to the extent possible,” says WRIF board president Samantha Davidson Green. “It was a great way to cap a year of improvisation and innovation – a lot of innovation. We were all ready to do programs for the May festival when the quarantines started, but we didn’t want to leave it there. The board made a commitment to do everything in our power to connect people to film.”

That effort began with WRIF joining the Sierra Club of the Upper Valley to live-stream a program celebrating the 50th anniversary of Earth Day in April.

Later in the spring and into the summer, WRIF hosted virtual discussions of a wide variety of topics, among them Norwich filmmaker Nora Jacobson’s documentary about iconoclastic poet Ruth Stone.

“It was incredibly helpful for me,” Jacobson said of the discussion of her work in progress, now in the editing stages. “I received a lot of good feedback from people. I could ask questions of the audience and they could answer.”

WRIF also helped Jacobson continue the part of her Freedom & Unity project closest to her heart: Encouraging young filmmakers around Vermont to pursue passion projects of their own, with an emphasis on social justice.

While fewer Vermonters submitted films than in years past – among the 56 was Norwich’s Ezra McGinley-Smith, whose documentary short about the Willing Hands program fighting food insecurity won the middle-school division’s social justice award.

“It was hard getting as many to submit this year because so many young people, especially, had been thrown into isolation,” Jacobson said. “The silver lining was that during the awards ceremony, which we did on Zoom, many more kids were able to participate in the discussion after the screenings. In the past, we would have to get them to come to the theater. This way, we had a much higher attendance from the young people. The kids tend to be rather shy when they’re standing on the stage. But in the safety of their homes, they were more open.”

WRIF’s fall series of virtual discussions leading up to the November election, with an emphasis on race and voter suppression, also exceeded the organizers’ expectations. With panelists ranging from Vermont congressman Peter Welch to Kiah Morris, the Black state representative from Bennington County who left the Vermont legislature after months of harassment, “we ended up with fabulous participation because we didn’t have any geographical bounds,” Davidson Green says. “We really felt it was an urgent time to offer opportunities to connect.”

The warm, relatively dry summer of 2020 gave a variety of area arts groups a brief opportunity to reconnect us with live performance – some enlightening, some entertaining, many serving both purposes.

At Lyman Point Park in White River, the Hartford recreation department staged several concerts by Americana performers – alas, the Quechee Green, usually the alternating venue for the Wednesday-night shows, is too small for more than a few socially-distanced circles – and showed vintage movies.

And with grant money from Vermont’s COVID relief allotment, Pentangle bought an outdoor projector and screen to show the documentaries Good Trouble – about civil-rights icon John Lewis – and I Am Not Your Negro, about author-activist James Baldwin. While the admissions-by-donation to these events couldn’t make up for revenue lost over the spring and summer, Wilson told me and my wife Goodie before one of the concerts, “it keeps us in the public eye, lets people know we’re still here.”

So was and is Barnard’s BarnArts Center for the Arts, which recruited area actors to perform a theatrical adaptation of Sinclair Lewis’s Vermont-based dystopian novel, It Can’t Happen Here, during a late-summer, well, barnstorming tour of town greens and parks. Goodie and I saw the production, a timely as well as entertaining reminder of the approaching election, at Woodstock’s East End Park, along with at least 100 socially-distanced spectators in the hillside bleachers – a blessed break in the drought of live performance.

Before long, of course, came the shortening and the chilling of the days, and yet another darkening of the performing-arts world as we knew it. Sure, it helps to fill some of the void, if one has broadband, to gain access to live-streaming of programs and movies from sources ranging from White River’s JAG Productions and Dartmouth College’s Hopkins Center, to the Billings Farm and Museum’s Woodstock Vermont Film and the Chandler Center for the Arts in Randolph.

The Chandler’s Vermont Pride Theater program recently announced that after 10 years of promoting and presenting staged readings and full productions of plays with LGBTQ themes, would bow out in early February with a Zoom presentation of Raggedy And, a comedy of manners in which four LGBTQ characters debate whether one of them, a poet about to read one of her works at a presidential inauguration, should declare her sexual preference.

In deciding to lower the curtain on the program, Pride Theater board president Sharon Rives wrote in a recent email that “our mission of giving voice onstage to the issues and concerns of LGBTQ Vermonters, to build understanding between them and the wider community, has been largely achieved.”

There are plenty of other issues and concerns that arts organizations in our regions expect to tackle in the coming weeks, months, and years, even after the change of administrations and of tone in Washington, DC, and before and after – Lord willin’ and the crick don’t rise –  enough Upper Valley residents, Vermonters, and Americans receive vaccines allowing us to return to theaters free of masks and fear. “We don’t anticipate an old-fashioned festival until 2022,” WRIF president Samantha Davidson Green said. “We’re looking right now at doing a hybrid of outdoors and streaming this spring, along the lines of the Light River Junction concept.

“The goal, long-term, is to continue nurturing the full cycle, with the activist angle that has been a big part of our identity. There’s a lot of good will right now. We don’t have a shortage of interesting content to watch. If anything, there’s almost too much content out there.

“What people want is a trusted curatorial process with a community that comes together with a sense of it all.”