John Ferney will miss the challenges of the past several years as president of the Quechee Lakes Landowner’s Association (QLLA) Board of Trustees. His term ended in July 2014 and for the first time in many years, Ferney does not hold a formal position in QLLA governance.

Over the years, Ferney has been a member of the Nominating Committee, the Greens Committee, the Finance & Audit Committee and chairman of the Golf Committee. He was elected to the Board of Trustees in 2008, served as treasurer for two years, and another two years as president. Ferney spoke with the Quechee Times about his experiences.

“We all come here for the setting and facilities, but we stay for the people and the community. It has been a pleasure to serve the people of Quechee as a Trustee,” he said.

Ferney grew up in Walpole, MA, as the middle of five children. He was brought up with a strong sense of community and giving back is considered a family tradition. Both he and his wife, Gail, are true supporters of the Quechee community and the Upper Valley.

The Ferneys bought land and built their home in Quechee in 1988. They lived with their three sons in Westford, MA, at that time and spent a lot of time in New Hampshire on the weekends. When friends introduced them to Quechee, they found the place that they wanted to be—location, beauty, golf, skiing—it had everything that this active family was looking for!

A graduate of Boston College with a BS and an MBA, Ferney began working at the Raytheon Company in 1966. He was with the Missile Systems Division for most of his career, and retired in 2001 as a vice president of Raytheon Aircraft in Wichita, Kansas.

Upon retirement, the Ferneys headed back East to become full-time Vermont residents. John immediately put his professional skills to work for QLLA, first serving on committees and then at the board level. He also joined the Board of Headrest, Inc.—a non-profit organization based in Lebanon, NH, that provides addiction and crisis support services—and is currently the vice president.

Ferney said he has always loved numbers and approaches life from a financial perspective, making decisions based on an analytical framework of value. He naturally incorporates multiple perspectives—community, organizational, personal, etc.—into this equation to successfully come up with a balance.

Challenges during his tenure as president

Thanks to hard work by all, QLLA was able to recover from Irene with no additional financial assessment to the members and with a solid plan in place for managing such risks in the future.
Ferney believes that in some ways Irene was a hidden blessing in that it brought the community closer together. The challenges and successes actually, “increased the trust between club management, the board and the membership. Everyone shared in the recovery and the pride of making it through a major crisis,” he said.

Among the internal challenges, he mentioned the inactivity of the current Quechee Lakes Development Company, the decline in golf revenues and the aging out of Quechee members. Strong leadership and management were critical during the storm and the recession, and still are.

When the club found itself without a general manager (GM) in 2013, John took on the dual role of club president and interim general manager including overseeing the search for a new GM. Tim Lewis joined QLLA as GM and chief operating officer in September 2013. John says that hiring Tim was one of the best things the board did in his six years. He thinks that QLLA now “has a very strong management team to bring it into the future successfully.”

Some of the programs and initiatives that have already begun are key to QLLA’s future explained Ferney. They include better communication, improved marketing, a strong capital plan and increasing the value of membership.

In the area of communication, quarterly member forums, Q-Notes and periodic email updates are in place. In addition, regular meetings of Quechee’s condominium associations’ presidents were initiated to discuss topics of common interest.

In order to attract new members and get the QLLA name out, a marketing coordinator was hired and the website updated. Ferney is excited about the implementation of the Certified Quechee Rental Program. This program aims to assist renters in finding a “quality” Quechee vacation. Potential buyers often first rent and a poor rental experience creates a poor perception of Quechee.

A strong capital plan reassures both current and new members that the infrastructure is maintained and enhanced.

With the exception of golf and skiing, all amenities are now included in the base dues, encouraging the use of amenities and providing more value to those dues. This initiative, along with improved food & beverage service and several golf initiatives, has resulted in a more lively and actively used club already.

He doesn’t offer any particular advice to the incoming president – just the vision that Quechee Lakes should not continue to be the best-kept secret in Vermont. “There will always be differing opinions and challenges in a club this diverse, but I’m confident that QLLA is in a strong position to meet them,” he said. 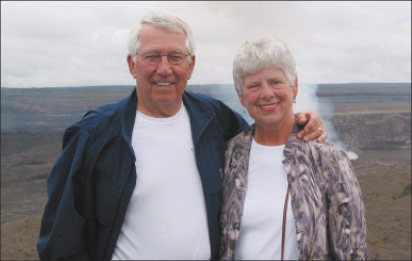 Ferney won’t have a problem filling his newfound free time. He serves on the board of Headrest, he loves to ski, and he and Gail have five grandchildren spread out across Connecticut, New York and South Carolina to visit, and Quechee has two beautiful golf courses just calling his name.

« Previous post
Debbie Marcus: How She Found Her Place in Vermont
Next post »
Lebanon Ballet School – It’s Not Just for Girls