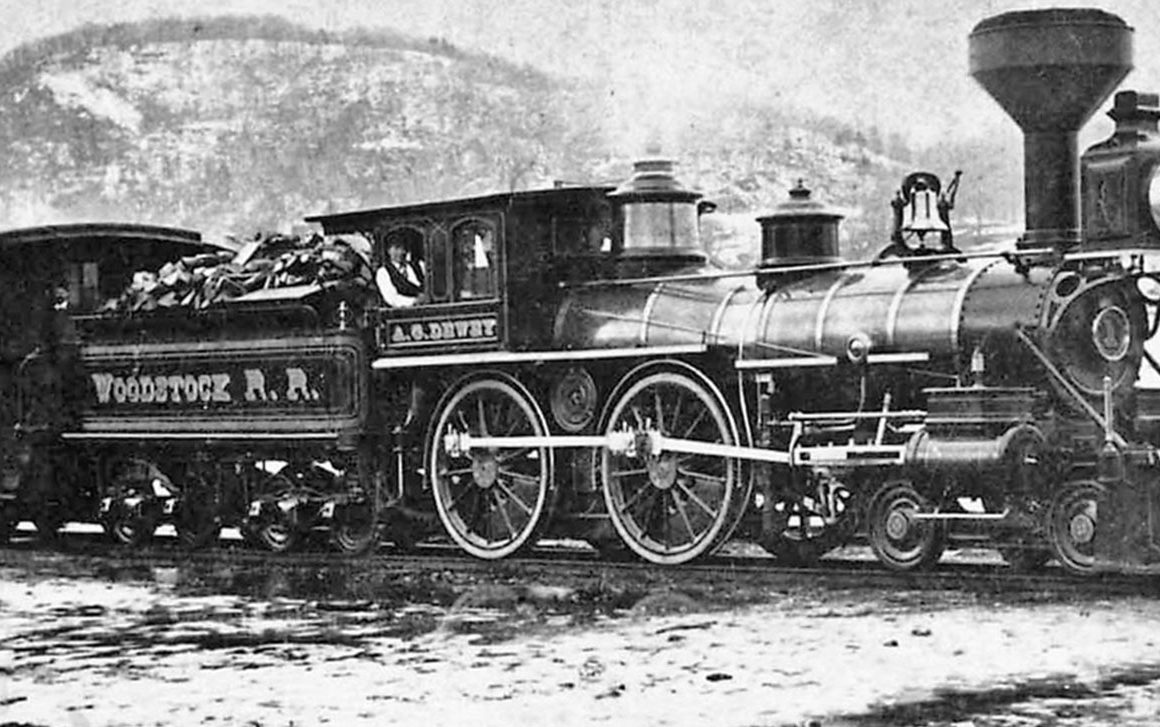 Despite the influx of businesses and organizations devoted to the arts, the prevalence of good restaurants, and the interesting happenings occurring in the town, White River Junction, Vermont, was first a major railroad center for Northern New England. After the Civil War, when the growing dependence on railroads spurred a rail boom around the nation, White River Junction emerged as an important rail hub. Several rail lines, and rail companies found the town a critical junction for their services. Many of these rail lines extended hundreds of miles in all directions from White River Junction making it a connector to the major cities in the region. One local rail line, dwarfed in size by the major railways, proved an essential component to the Upper Valley. The Woodstock Railroad, stretching roughly 14 miles from White River Junction to Woodstock and running directly through Quechee remains a special part of the rail history of the Upper Valley.

In his book, Over The Hills To Woodstock (Stephen Greene Press, 1967), author Edgar Mead Jr. lays out the history of the local railway, from its tenuous beginnings, through its years of financial success, to its final demise during the Great Depression. As with so many of the area railways, the Woodstock line got its start in the post-Civil War period. As railways opened up freight and passenger movement in the Upper Valley region, local businesspeople, farmers, and townsfolk in Woodstock and Hartford felt a local line serving these towns (including Quechee) would provide an economic boost to the region. 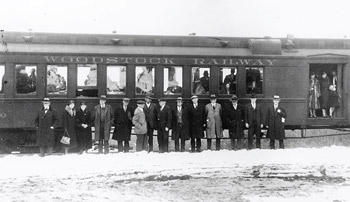 A local rail historian who is familiar with rail activity in the Upper Valley, Chris McKinley, says actual construction work got underway on the Woodstock Railroad in the late 1860s. Before construction, much work was done forming a rail corporation and raising funds for the project. Local mill owners, farmers, and townspeople all purchased shares in the new rail company, and the town of Woodstock contributed a substantial amount in the project. Engineers determined the course of the track, which took it over Hurricane Hill, Shallies Hill (which proved to be the steepest grade on the line and required the most rock and dirt displacement), and over the Quechee Gorge, a formidable obstacle.

Grading and creation of the rail bed commenced in 1868, but in early 1870, work stopped the result of a regional, national, and international economic slowdown, which turned into a depression. More money was needed to continue the project, but raising these funds during this time was difficult. Finally, by 1874, work was able to resume on the railroad. In the spring of 1875, the first section of actual rail was laid, and the finished product was well within sight.

Constructing the trestle bridge over the Quechee Gorge

One major project was still required, and that was the building of the trestle bridge over the Quechee Gorge. Though some elements of the bridge foundation were constructed years earlier, the bridge itself needed to be assembled, which happened in the summer of 1875. Surprisingly, the bridge went up in just a few weeks time. Noted area railroad historian Jay Barrett says the process went quickly because the bridge was prefabricated before being installed. The bridge was wooden, though iron connectors were used to add to its strength. 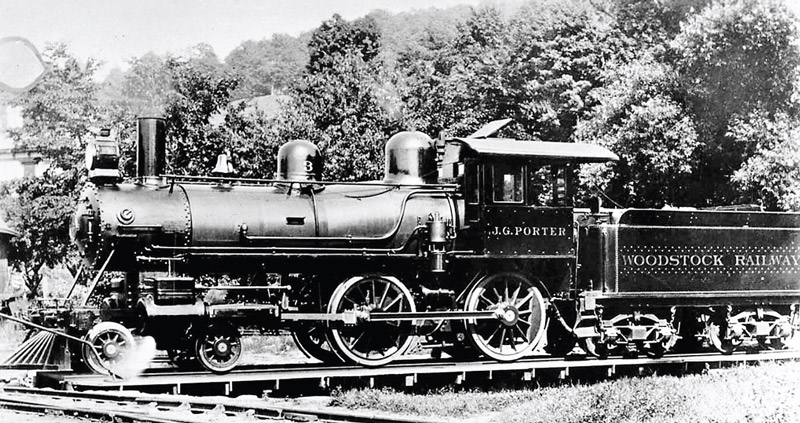 Once the bridge was up, the wood-burning locomotive Winooski was brought on site to test the bridge. In his book, Edgar Mead wrote that the testing of the bridge turned out to be quite a spectacle, with crowds of local folks gathering to watch the engine pass over the newly constructed bridge.

On September 29, 1875, the first train ran the entire distance of the railway, from White River to Woodstock.

The Woodstock Railroad proved a boon to the businesses along its route. Farm products, including wool, livestock, and timber made their way in the freight cars. Mills along the route, particularly Dewey’s Mills in Quechee, saw business grow dramatically. Not surprisingly, the Dewey family was involved heavily in the railroad, with Mr. A. G. Dewey serving as the railroad’s president for several years. Two of the engines that regularly hauled freight and passengers on the rail line were even named after him. 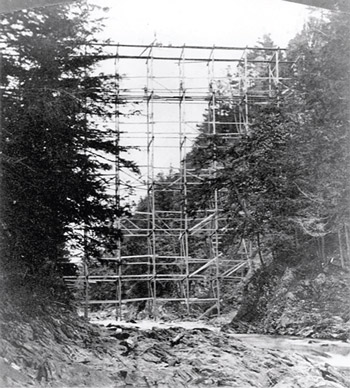 Building the first trestle bridge over the
Quechee Gorge

Another well-known local business mogul, Woodstock’s Frederick Billings, also served as railroad president, until his death in 1890. Afterward, his brother, Frank, became president. Frederick Billings established Billings Farm in Woodstock, which today The Woodstock Foundation operates, and is open to the public.

The year 1890 also brought about a restructuring of the rail company, and at this time, McKinley says the company name changed from the Woodstock Railroad to the Woodstock Railway. During this period, upgrading the equipment on the rail line became necessary. Newer, heavier engines and cars were needed to keep up with the technological changes occurring in the industry, and the older iron rails needed to be upgraded to steel. Despite these extensive capital outlays, the railroad was financially stable into the 20th century.

As mentioned, trains and equipment were upgraded to meet the needs of business clients and passengers, as was one very critical element of the Woodstock Railway – the Quechee Gorge Bridge. By the mid part of the first decade of the 1900s, the heavier trains, and heavier loads, were taking a toll on the bridge. Engineers hired to assess the bridge’s structural integrity reported back that the 30+-year-old structure had problems. At first, the wooden structure was strengthened, but by 1911, the railway made the correct decision to replace the bridge, averting potential disaster (in fact, during the 58 years of operation, there were 0 deaths from accidents on the line). The steel bridge over the Quechee Gorge, erected in 1911 and still standing today, cost $26,000 at the time of construction.

The remaining days for the Woodstock Railway were numbered by the late 1910s, however. Barrett says 1916 was a pivotal year for railroads. That year marked the apex of rail track mileage in the country, and was also the year that saw strong increases in auto production for everyday folks (particularly Ford’s Model T), and the year Congress authorized a spending bill to increase road construction.

The 1920s saw a drop in traffic, both passenger and freight, for the Woodstock Railway. Declining revenues were accompanied by increasing needs for service and repairs. The great flooding that hit the Upper Valley in 1927 took a toll on the rail line. Then in 1929, the Great Depression began.

The end of the Woodstock Railway

In 1932, Railway stockholders voted to sell the rail right-of-way to Vermont, for the building of a new road, Route 4. The final train run on the Woodstock Railway was on April 15, 1933, and Edgar Mead states in his book that 350 tickets were sold for that last ride.

Not much remains of the Woodstock Railway. McKinley says there are still a few spots where remnants of the old rail line exist, though most of the line is under the pavement of Route 4. The Woodstock Historical Center does have antiques and artifacts from the railroad in its collection, he adds. Of the six rail stations that served the railroad, only the station on Pleasant St. in Woodstock, and its nearby freight house remain, says Barrett.

Interested in reading more about this historic local railroad? Though Edgar Mead’s book is out of print, you can find a copy at the Quechee Library, or possibly online through used book dealers. Jay Barrett’s book Woodstock (Arcadia Publishing), part of the Images of America series, is available at the Yankee Bookshop in Woodstock and includes a chapter on the Woodstock Railroad.

The Rotary Club of White River once again brings the magic of the North Pole to the Upper Valley. Children of all ages are invited to come enjoy listening to The Polar Express by Chris VanAllsburg, sing holiday songs, enjoy hot chocolate and a cookie. Santa will be there to greet each child, and give him or her The Polar Express Bell. For more information and to purchase your tickets visit: www.hartfordvtpolarexpress.com.
Share: