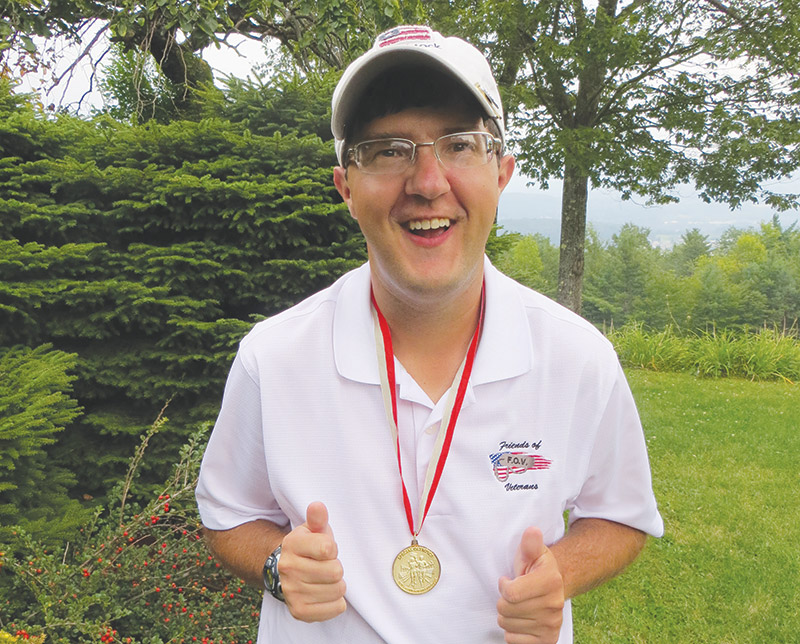 Hunter Hall, 30, of Quechee, VT, had a few new experiences this past summer that were pretty amazing, culminating in winning the bronze medal in golf at the Special Olympics World Games in L.A. Hunter and his parents, Allen and Sally, and his brother, Camden, are all avid golfers often visible on the Quechee course. Although Sally can’t remember at exactly what age Hunter started golfing, it was somewhere during his middle school years (with two boys close in age, who can remember anything?) Allen had been golfing but, as Sally said, as the boys took an interest, she took up golfing, too, so it could be a family activity.

At first, Hunter lacked the coordination to put the ball on the tee, or to hit on the fairway, so he had some help and practice shots throughout the rounds. He is a very visual learner, his mother noted, (he never had a lesson but, rather, picked up the game by watching and playing.)

He began competing in the Special Olympics during his junior year of high school. He competed in bowling and snowshoeing, as well as golf. Over time, he grew to be a stronger golfer on his own, and outgrew the need to have an able-bodied player as part of his team by the time it was required for him to compete on his own. He then qualified for the World Games by winning the gold medal at the Vermont Special Olympic Games in 2013.

Hunter had to stop bowling along with the rest of us in the Upper Valley when the Upper Valley Lanes and Games in White River Junction shut down. He’s not the only one to be incredibly disappointed. Sally recounted her love of a program that Dartmouth College students used to run on Tuesdays there with the members of the Special Olympics. Sally noted that, while sometimes they would just be bowling, the students would sometimes have the music and lights going, dancing with the kids. And, she said, “they all loved it”.

Hunter still snowshoes, but golf is his main focus as a competitive sport. He collects logo and signed golf balls—as many as he can. He has thousands of them decorating his room at home. He also is lucky enough to have a practice putting green in his basement. 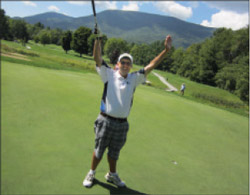 This past summer, Hunter was one of 7,000 athletes from 177 nations participating in the Special Olympics World Games 2015. For the first week, Hunter, and the rest of the participants, were flown to San Diego for qualifying, without parents. He hadn’t spent much time away from his, but with Hunter’s happy, kind personality, he had no trouble fitting in anywhere.

Allen, Hunter’s dad, caddied for him the whole week of the competition, and Sally and his brother Camden flew to L.A. to watch and cheer him on. Perhaps having all his family around brought some luck, because despite four abnormally hot days of competition, Hunter shot rounds of 104, 103, 102, 103—412 total, giving him enough of an advantage to win the bronze medal.

In an August interview with the Valley News, Missy Rodriguez, one of Hunter’s coaches in the Upper Valley Hawks Special Olympics program, said, “He’s the man… He’s a great adult. He has a great personality, very energetic. He smiles all the time and loves to know what’s going on. And he loves to be involved in whatever he can be involved in.”

Missy Rodriguez isn’t the only one who feels that way about Hunter. Craig Sherpa, a retired Marine Corps drill instructor, began coaching Hunter last winter to get his skills up and ready for the big games. Craig commented, in the same Valley News article, that anyone who gets a chance to meet Hunter will be meeting “one of the most beautiful human beings I have ever met.”

Sally also hinted towards Hunter’s love for others and that winning might not even have been the biggest highlight. Meeting people and making new friends is what really makes Hunter happy. He was also thrilled when Michelle Obama was one of the guests at the opening ceremonies. 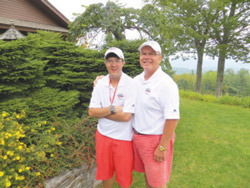 Now that he’s got his medal, Hunter certainly hasn’t sat back on his laurels. He’s one that never stops moving. He has a job delivering the D (the Dartmouth newspaper) across his campus route, as well as working at Dan & Whits a local store in Norwich, VT. He’s golfing, practicing and playing with his fellow Upper Valley Hawks Special Olympics team and, likely, inspiring many others to dream about making it to the World Games.