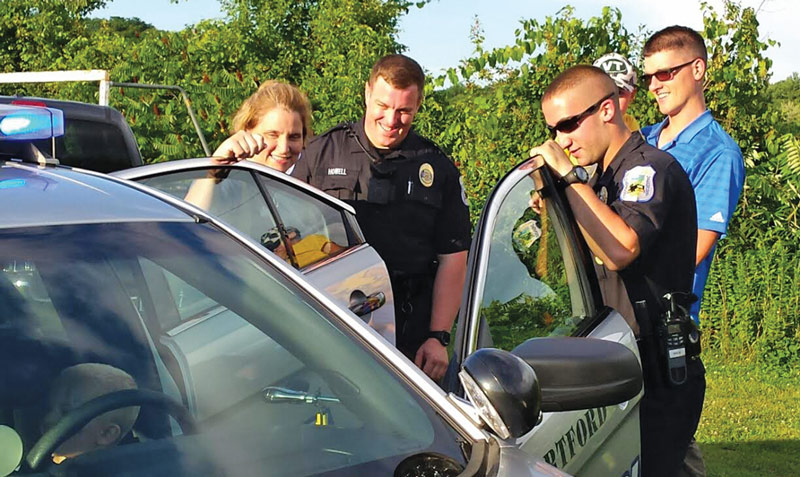 We aim to spend about one-third of each officer’s time in proactively building and fostering relationships in the community, says Hartford Police Chief Phil Kasten. The majority of calls to the police are from a crisis of one sort or another, and police officers train for those moments, with the possible need for quick and sometimes drastic action. But preventing crises is even better than helping people through crises. Weaving sociable acquaintance with police officers into people’s daily experience makes it easier for people to call the police for help when they need it. It also reminds would-be troublemakers that police officers are woven into the community and are keeping an eye on what is happening in the community. And it lets police officers develop comfortable connections with citizens, making it easier for them to calm difficult situations. Several programs for mixing police and community members include:

Many towns, in fact about 20,000 nationwide, participate in this annual celebration at the beginning of August. The program began as a way to diminish crime by strengthening a community. In 1984, when the idea first took root, people in about 400 towns just turned on their porch lights and sat outside, or visited up and down their streets. Festivities expanded, of course. “It’s kind of like a block party,” says Chief Kasten. “There’s a dunk tank, and hot dogs, and a bounce house.” Major Braedon Vail often runs the grill. “He’s an expert hot dog chef,” the chief says smiling.

Other community organizations participate too, such as the Rotary Club of White River and the Hartford Community Coalition. The Water Department supplies water for the dunk tank with the added benefit of being able to spread awareness about the importance of clean water.

Coffee with a Cop 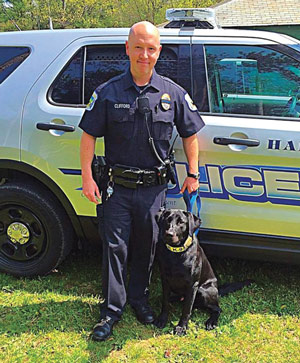 The Hanover Co-op Food Store in White River Junction, Vermont, connected with the Police Department to organize this informal meet-up opportunity. The store put up a tent and provided refreshments – always a draw. Officers stopped by between shifts to meet residents and answer questions. Such events are primarily social, but occasionally someone will raise a concern that generates some police follow-up. “Policing is a community-wide activity,” Chief Kasten points out. “We want people to see us as community leaders and facilitators.”

Occasionally an officer will visit the Bugbee Senior Center in White River Junction, to join the popular lunchtime gathering, and perhaps to make a presentation on a topic relevant to seniors. The police seek to alert seniors to the scams – many targeted to – seniors, recurring by phone and internet.

The Police Department and the town’s schools have organized a partnership that links two police officers with each school. The officers put quite a bit of time into this connection. They attend concerts and sports events, show up occasionally to chat during lunch or recess and patrol the campus daily, and the school building weekly. This on-going visibility helps create a connection, but still, says Major Vail, “some kids may be timid.” The department has a K-9 officer who can be an excellent icebreaker attending various events with their handler. “Everybody loves a dog!” he adds. One of the events that Major Vail is very involved in is the Special Olympics.

“The region, and in particular Vermont, approaches addiction as the medical problem it is,” notes Chief Kasten. These days the opioid epidemic is on everyone’s mind, but Chief Kasten and Major Vail call attention to another problem: alcohol. “We don’t talk about it, but it’s the biggest addiction,” says the chief. “It contributes to domestic violence, serious fatal crashes, child abuse.” Major Vail chimes in, “It’s socially acceptable. Legal.” Chief Kasten adds, “That’s why law enforcement people are generally not in favor of legalizing marijuana.”

The department focuses on an annual theme each year to help build awareness for schoolchildren and adults; the topic is cyberbullying. “Social media creates feelings of invincibility,” notes the chief; that makes it easier to post threats or harmful photos. “We tell people, ‘If you wouldn’t say or do it in person, or you wouldn’t say or do it in front of your parents or your spouse, then don’t do it online.’”

“There are always issues with technology as it advances,” says Major Vail. “It’s easy, and we like, but it comes with a price.” Chief Kasten adds, “It ties in with our efforts to build relationships. You move at the speed of trust.”

« Previous post
Meet your Neighbor: The McDougalls
Next post »
The Grange Theatre Puts the Art in ArtisTree