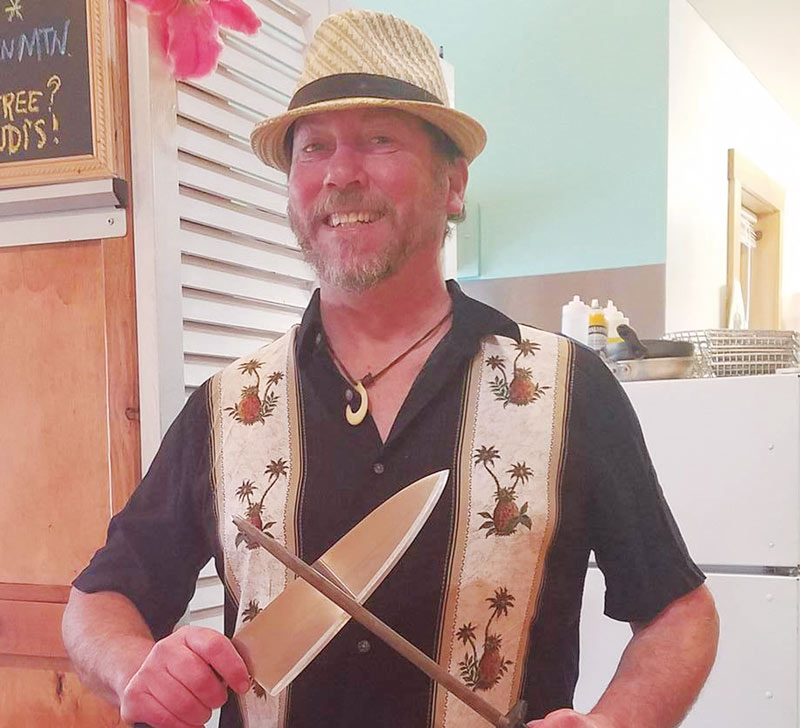 If Brad Pirkey isn’t a familiar face or name to you around the Hartford/Quechee area, maybe you recognize his brightly colored food bus. Chef Brad’s CrazySide has been around the area since 2012, and it’s hard to miss. Most recently you’ve probably noticed the colorful addition to Fat Hat Corner where Quechee Main Street meets Route 4. Chef Brad’s bus has moved into the corner, and it sounds like the CrazySide may have found a home.

Pirkey grew up in the Woodstock and Killington, Vermont, areas graduating from Woodstock High in 1980 where he claims his only ‘A’ was for a quiche cooked up for French class. Talking with him it sounds like his evolution into a chef was natural, and easily led him to become a restaurateur. He was given the lead in kitchens since he was a kid starting at places like Rumbleseat Rathskeller in Woodstock and Cindy’s Pizza. After high school and a bit of travel, Brad attended Johnson and Wales College of Culinary Arts in Providence, Rhode Island. 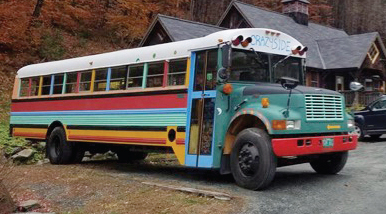 Pirkey owned The Corners Inn in Bridgewater for 15 years (called Z Corners Inn by new owners since 2011). The Corners Inn was a success for him, but eventually, he needed a hiatus. Pirkey put the restaurant on the market, and set about driving his VW bus around the perimeter of the country for nearly a year picking up cooking jobs here and there along the way – he even rented an ice cream sandwich shop in Palm Coast, Florida for a time. Eventually, The Corners Inn sold, and he got homesick for Vermont and came back in 2012.

Combining his restaurant experience with his travel experience, Pirkey started a food truck. First obtaining an old BBQ cart, he looked to start up in Bridgewater again. He spied the perfect spot on Route 100a and realized it was at the Maple Leaf Farm. The owners of Maple Leaf told Pirkey that the family had always thought selling hot dogs and hamburgers alongside their farm stand would be a fun addition. The situation was perfect for everyone involved: Pirkey moved onto the land and did farm chores for 20 hours a week while keeping the original Chef Brad’s CrazySide up and running. A plague of bad luck ended the fortunate scenario. In 2014, the first CrazySide was destroyed in an accident, and Pirkey left the farm to attend his ailing mother.

Later that same year, longtime friends helped Pirkey obtain an old camper and motivated him to set up the CrazySide again on Route 12 just before Hartland Hill Road in Hartland, VT. This version of CrazySide lasted two summers. You can tell how much he enjoys his CrazySide when he talks about the lot being full with families meeting up to eat and kids running around. The CrazySide was such a success he started to look for a permanent home and quickly found it. Fat Hat Corner was renting the secondary building on the property. Kind of like the fortuitous nature of Maple Leaf Farm, Pirkey found the ad on the Upper Valley Listserv.

Now, Chef Brad’s CrazySide can stay open all year long. Even though he always swore he wouldn’t be a line cook beyond the age of 50, he is currently working up a creative menu and cooking it to order Wednesday through Sunday from 11 am to 2:30 pm. The menu changes nearly every day and is on Facebook at Chef Brads “Crazy Side” or visit chefbrads.com. There are always two soups with one vegetarian option, and a grilled cheese of the day alongside a seared salmon sandwich and smoked turkey with kimchi and swiss – just for some ideas on the rotating list. Pirkey is excited for the summer when the bus will be an ice cream parlor, and all eating will be outdoors except during inclement weather when the colorful building will be open for people to sit inside. For now, it doesn’t feel like winter when you go into CrazySide. The color, atmosphere, and menu are warm and bright – and it’s all coming from Pirkey himself. Make sure you welcome the local wanderer, and you’ll probably find yourself hoping that the CrazySide has found a home, and will stick around for a good while.