All, Made in Vermont 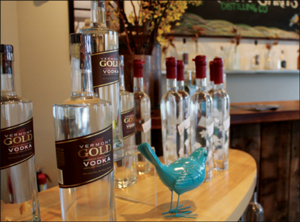 When I first walked into the Vermont Spirits Distilling Co. production and retail shop in Quechee Gorge Village, Quechee Spirits’ employees Jeremy Herrell and Mimi Buttenheim greeted me with smiles and asked if I wanted to do a spirit tasting.

I paused for a moment and realized, while I had done plenty of beer and wine tastings in my life, I had never done a spirit tasting before. Apparently I’m not the only one.

“I think spirit tasting is new for a lot of people,” Buttenheim told me as I sampled a few of the distillery’s products, including the No. 14 Bourbon: a whiskey bourbon distilled with maple syrup that I was quite fond of.… Read More

The Tao of Fly Fishing

In his essay on fly fishing titled The Happy Idiot author John Gierach notes, “There are times when fly fishing seems to be suffering from the same malady that afflicts the rest of society: too many so-called facts and not enough real experience.”

When the Quechee Times editor approached me about writing an article on my favorite places to fly fish in the area I thought, “What? This woman knows nothing about the culture of fly fishing. You never tell where you caught the fish!” Writing such an article would be much like writing a book concerning all of one’s mistresses and then giving it to one’s wife to proof read.… Read More

If life is a series of transitions, Myrna and Dick Brooks know that well. Their “transition” involved moving from urban Phoenix, Arizona, to moving to a house in the woods at the end of a dirt road in Quechee, where they now call home.

In 2002, the Brooks bought a Deck House built in 1972, “the first house on Taft Family Road,” according to Myrna Brooks. The Deck House concept was a popular choice for early Quechee Lakes Landowners Association (QLLA) buyers. Art Garges, the owner of A.G. Design and the architect the Brooks eventually hired for their major renovation, explains that a Deck House representative and builder in the area helped advance this new concept in building to the earliest homes in QLLA.… Read More