May 28, 2019by adminQTNo CommentsAll, Miscellaneous 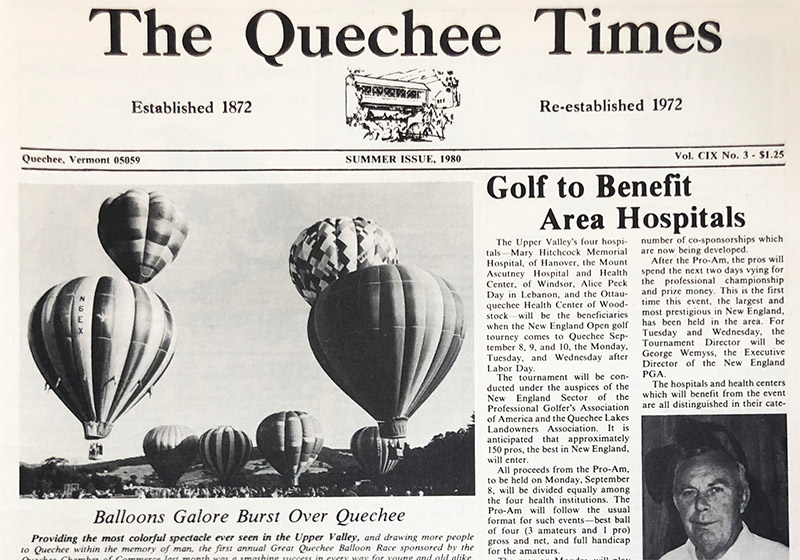 It was a cool spring day in 1978, when a pickup truck drove up the drive to the Quechee Inn. Emblazoned on the truck’s doors was a hot air balloon with the words “Glens Falls, New York Balloon Festival. Short of stature but with a hearty voice and smile to match, he came into the Inn and introduced himself as “Ed Griskott, organizer and promoter of the Balloon Festival. Looking for a Mike Yaroschuk; want to talk hot air ballooning. And, as they say, the rest is history.

Mike Yaroschuck and his wife, Barbara (plus three children), had recently purchased the Quechee Inn at Marshland Farm from the Quechee Lakes Corporation and were starting down the road to establish the Inn as the traveler destination of the Upper Valley. Mike had grown up in Charlestown, Massachusetts; however, after several years of working as a Washington, D. C. attorney, he and Barbara wanted out of the city life to raise their children and started researching small inns and bed and breakfasts throughout New England. The Quechee Inn was their final stop.

Not one to sit still, Mike and a small group of business owners in Quechee established the Quechee Chamber of Commerce in 1978. As a fledgling organization, they were looking for an event that would jump start the group. Ed Griskott’s visit started the ball rolling. Mike’s birthday was usually around the end of June near Bunker Hill Day (always celebrated in his Charlestown neighborhood) so the last weekend in June 1979 was chosen as the dates for the first Quechee Hot Air Balloon Festival.

As it is today, the event was held on the Quechee Green. There were six balloons that flew in the morning and early evening (passengers purchased rides from the balloonists) several local restaurants served their signature food dishes; one or two musicians played in the old bandstand. There was only one entrance near an empty building that is now apartments and offices. There was no post office on site and parking was behind the present Red Barn Condominiums.

The Chamber actually lost money at the first Festival, but the sight of those six balloons and the excitement created by the event convinced the Chamber that it was just what the area needed. It did take a few more years before the event came into its own and cleared a profit.

Along the way, there were several changes – although everyone delighted in celebrating Mike’s birthday at the Festival, the Festival committee concluded the date was too close to the Fourth of July so moved it back to Father’s Day weekend which is when it is still held today. In those early days, the balloonists stayed either with Quechee friends or at the Quechee Gorge Motel (now the Quality Inn) with Jon and Nancy Bacon as host and hostess. To create a stronger relationship with the business community and the balloonists, a business could sponsor a balloon and its crew for the weekend. The sponsorship included a ride for the sponsor; a pre-Festival barbeque at the motel with your balloonist and crew; a sign on the balloon basket promoting the sponsor. Many long-time friendships were created with this promotion.  With increased interest in the balloon rides, the Festival committee elected to start selling the rides over the telephone. Technology has certainly changed that scenario!!

Mike was diagnosed with cancer at the end of 1984. He attended as many Chamber meetings as possible and stayed involved with the Festival until his death in March 1985. In recognition of his belief in the Chamber, the village, its residents, his family and friends, the Chamber of Commerce rebuilt the bandstand on the Village Green and, during a Balloon Festival, dedicated it to Mike by placing a brass plaque on the structure where it can be seen today.

The Festival has featured shape balloons – Smoky the Bear (who had to go to the Hot Air Balloon Hospital in Post Mills to have repair work done after swiping a tree branch), several visits from the Purple People Eater Dragon, the gigantic American Flag (so big it could not leave the Green), the Red Barn with Animals.

And who can forget the man in the chair who inflated hundreds of helium balloons and, literally, floated above the Green for some time! There have been helicopter rides from the Green, a French and Indian War Reenactment, several People’s Choice car shows. Many will remember the high water event that required all the Rvs to be moved to higher ground; the storm that blew down vendors’ tents or the bride, groom, minister and wife who, after the ceremony across the street from the Green, arrived for a balloon ride. In true fashion, the bride threw her bouquet into the onlooking crowd as they lifted off!!!

There is another piece to these 40 years that is difficult to document – the economic impact to the entire Upper Valley and beyond. The proof lies in the thousands, from near and far, who fill the highways and byways on their way to the Festival year after year.

The event started as a reason for a birthday celebration and the celebrations continues today. Over the last 40 years, Father’s Days, graduations, birthdays, reunions, golf matches, barbeques, wedding engagements and other life milestones have been celebrated on Balloon Festival weekends. Certainly a Quechee legacy! 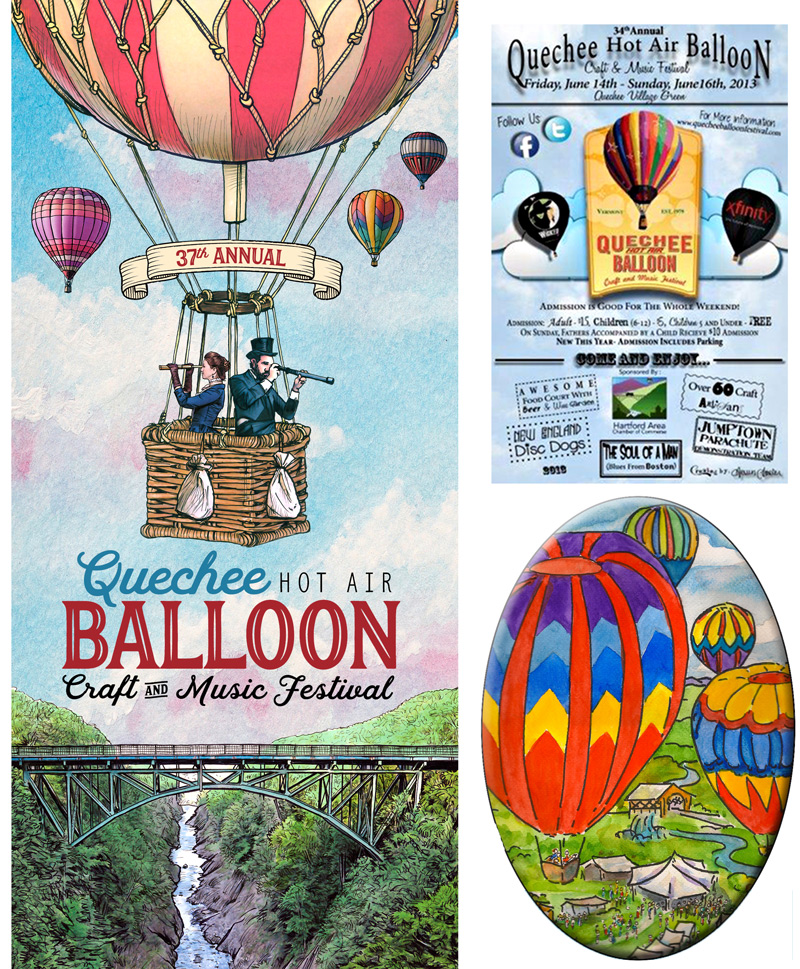